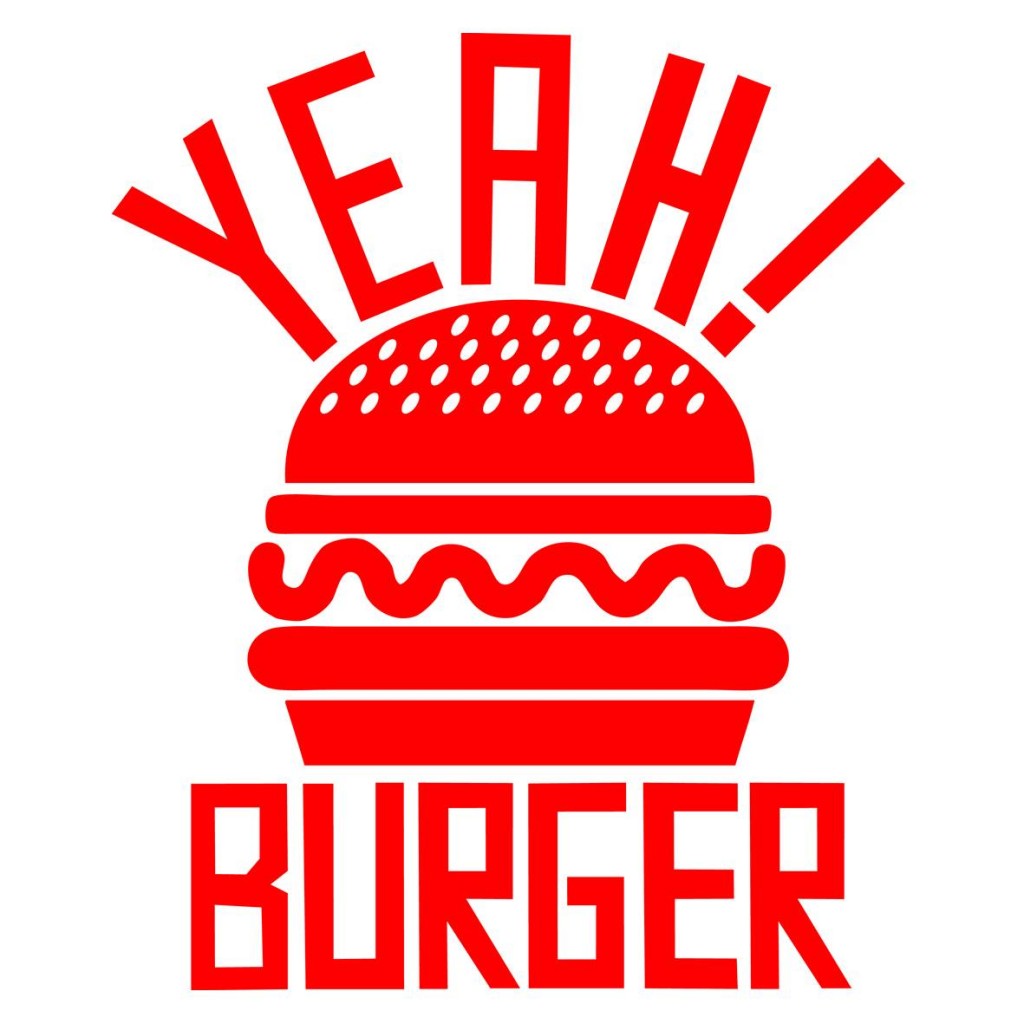 So the Yeah! Burger pop up is underway and I headed down the night after it opened to see what their £5 patties had to offer. If you caught the press release last week you will know that Yeah! Burger is a collaborative project between four Hackney based friends, who met while working together at Broadway Market’s much-loved fishmonger Fin & Flounder. They have spent the past three years honing their individual skills in restaurants, such as Lucky Chip and Viajante. They’ve taken up residency in Catch and should be there for the next fortnight at least!

Founder Scott Hopkins says, “The burger market has exploded over the past couple of years and has become saturated with expensive and overly complicated offerings. Instead of piling flavours on top of flavours we’re using classic combinations that let the quality of our fresh produce shine. We at Yeah! Burger want to reclaim the burgers everyman origins and offer it at a price anybody can afford.” I was here to test the theory!

The menu is simple. You’ve got the choice of a Beef, Chicken, Fish or Veggie Burger, all priced at a mere £5! Fries are £2 and you can “Pimp” both with an extra £1. This adds Cheese to the Fries and either Bacon or Blue Cheese to the burger. The Fish Burger caught my eye when delivered to the booth next door but I couldn’t pull myself away from the self-titled Yeah! Burger in the end. I went no lettuce, no tomato, (just as a personal preference) and added bacon and a side of Chipotle Lime Mayo. I also went ahead and pimped my fries! 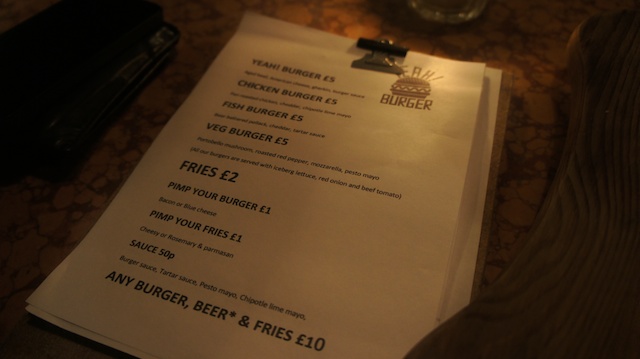 Whilst Wyld Wood was the tipple of choice for the night! 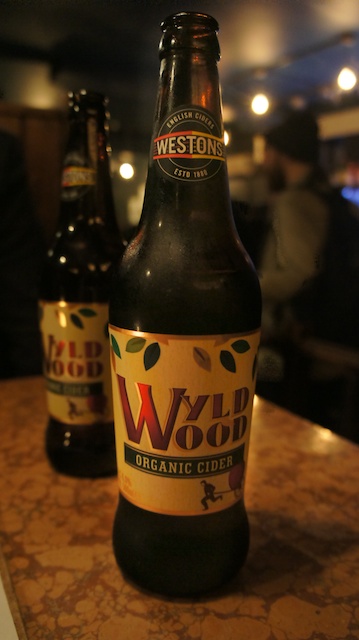 The burger arrived looking extremely inviting. Smaller than your average burger (hence the price tag) but towering high, covered in molten American Cheese and brandishing a long rasher of crispy bacon. I quickly snapped some shots an then dived in for the first bite. 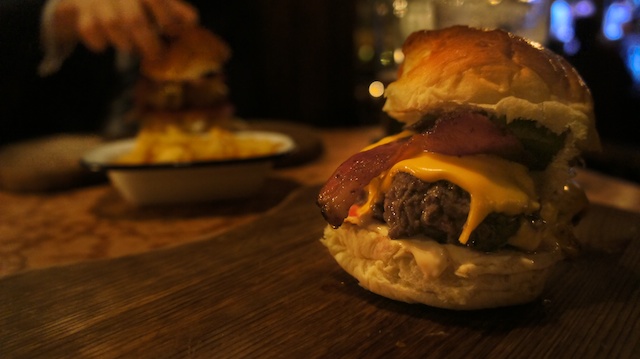 What the pictures do not show, is the two halves of a thick slice of gherkin, nestled underneath the top of the bun. I prefer my gherkin separate to the burger, so quickly devoured these, before re-assembling the bun for the first taste. Once in the hands, you soon realise just how soft the bun is. In the press release the guys provided me with, the bun had given me a few worries, as it looked like one of those sesame seed topped baps you get from a shoddy burger van! Fear not though, the bun was perfect! It was super soft and squidgy, just how I imagine the Whitecastle burgers from Harold & Kumar to be (those who have seen the film will know what I mean). 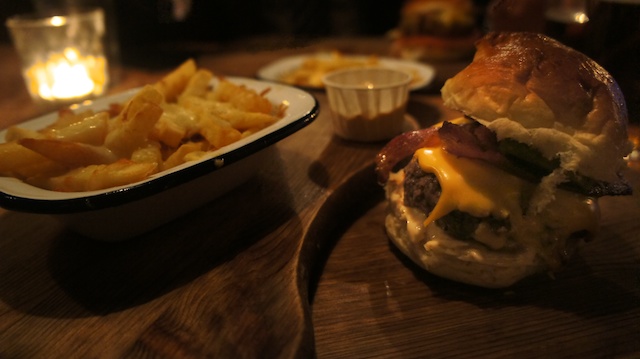 The burger itself though, is insanely good for £5! The meat is cooked perfectly and reminded me of Bleecker Burger’s patties I had at Mr Hyde’s National Burger Day. It was really rare on the inside and incredibly juicy. As soon as it hit the tongue, the meat was melting in the mouth, with the American Cheese adding to the indulgent comfort food factor. The bacon was thick and crispy, exactly how I like it, adding a subtle smoked flavour to the final bite. Plus, my decision to go without salad meant I could get the full meaty experience from the quality ingredients, just as the guys intended. Although I was dunking the final mouthfuls into my pot of Chipotle Lime Mayo! 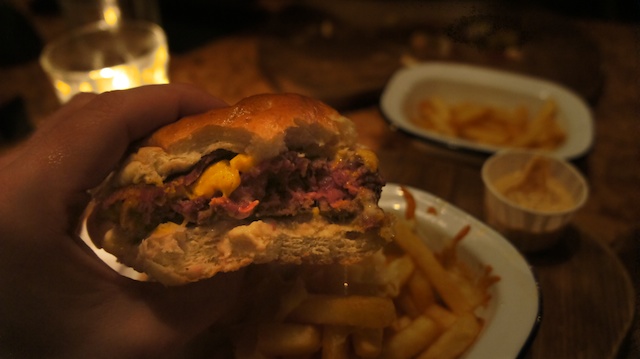 I’m going to let you all in on a little secret of mine though. My pot of Chipotle Mayo was far from finished and I’m not a fan of waste, so thought at £5, I couldn’t help but go in on a second burger to dip in the rest of the sauce haha! All jokes aside, the first one had gone down so well and I was in no mood to head home just yet, so put in the second order and said Yeah! allover again!

Yeah! Burger is at Catch Bar for two more weeks, with a view for a few more. If you are a burger fan like me, you have to sample this for yourself. I’m willing to bet money you get drawn in and order a second one, just as I did!