“There’s an actual garden at Covent Garden”, says a passerby at the launch of Nyetimber’s pop-up Garden Bar. 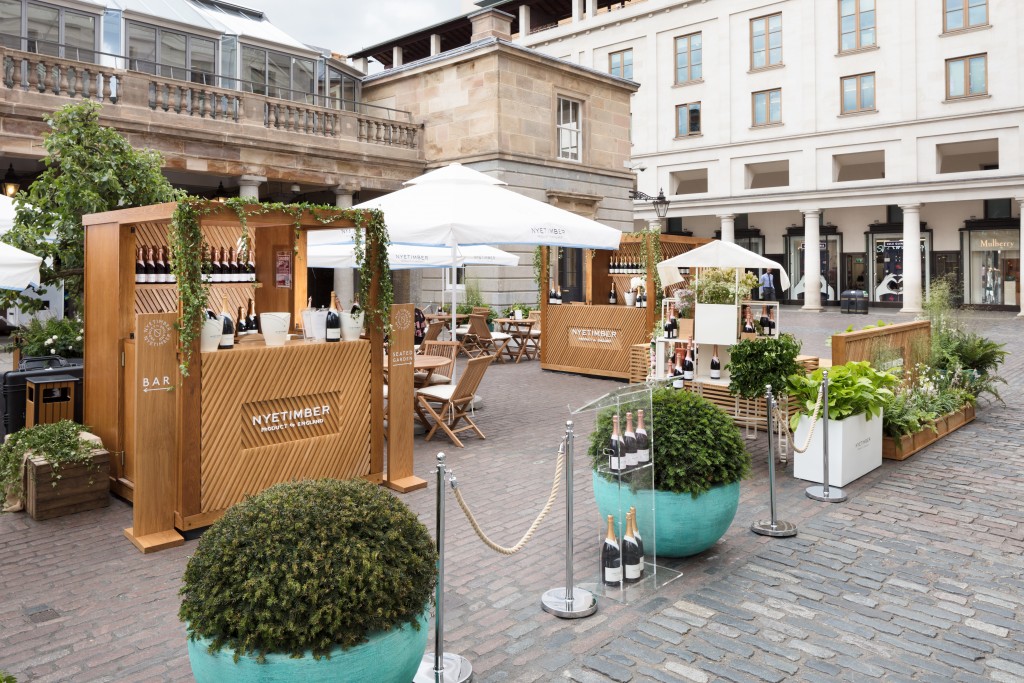 Sweet-smelling pink roses, cheeky foxgloves and even an apple tree pay homage to Covent Garden’s origins as a walled meadow and orchard back in 1200 AD. Designer Lee Bestall won the Silver Award at this year’s Chelsea Flower Show for his ‘500 years of Covent Garden’, which now serves as the perfect backdrop for sipping an English sparkling wine in the centre of town.

The little oasis of green offers Nyetimber’s exclusive English Pinot Noir, Pinot Meunier and Chardonnay blend at the heart of London’s shopping, theatre and dining district. Sitting in it feels a little like relaxing in Pippa Middleton’s elegant British summer garden (probably), with classical music soaring by and the occasional spontaneous reading from ‘A Midsummer Night’s Dream’.

You can pop in for cheese and charcuterie by Aubaine on Fridays, served with a perfect pre-theatre half bottle of Nyetimber Classic Cuvee. Or, go the whole hog and book a table at the three-course collaboration with Tomos Parry on Saturday the 24th of June. The YBFs winner Tomos has worked at the River Café and Climpson’s Arch, and has most recently won awards as the Head Chef at Kitty Fisher’s. His menu compliments Nyetimber with British, seasonal produce and flavours. The grilled lobster (covered with drool-worthy lardo and clams) will sit perfectly with a cold glass of British fizz in Covent Garden’s newest green space.

Nyetimber’s Garden Bar is open in the Covent Garden Terrace from 1-8pm until the 28th of June.