As gallery and museum restaurants go, there’s a real mixed bag out there. You may not have heard of Peyton and Byrne, but if you’ve ever been to the restaurant in the courtyard of The Wallace Collection or the plush café at The Royal Academy and thought “Ooh, this is nice, isn’t it?”, you have them to thank. 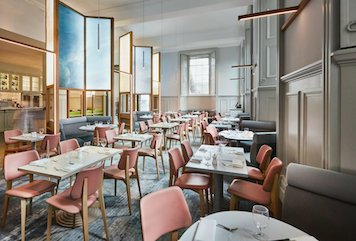 They’re also responsible for The National Café on the ground floor of Trafalgar Square’s National Gallery, the interior of which has just been redesigned by Ramy Fischler, a swanky Paris-based Belgian designer. We’re suckers for a plush interior, and the new refurbishment doesn’t disappoint. Enormous windows and ceilings the height of which you only ever find in art galleries make for an airy space that’s flooded with light. This is accented by soft, but not sickly, pastel hues and large printed screens which divide the dining room from the bar.

We settled in for lunch on a sunny Saturday afternoon. The menu is heavily Italian-influenced, and we’re reminded of Stevie Parle’s Palatino by more than one dish – which, by the way, we mean as a big compliment. 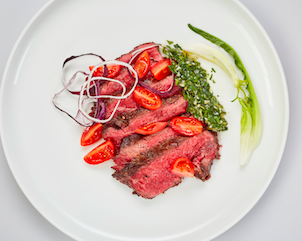 We start off with crab ravioli, rich and buttery, topped with shrimp and cockles, as well as ultra-tender Cornish squid (a big portion of it, too) served with a fresh and zingy crunch of puntarelle. Next up, a 14-year-old Galician bavette steak – apparently only served in a handful of London restaurants – sliced and dished up with gremolata and tomatoes. It’s so summery we wish we could have taken it outside to eat. Contrastingly, gnocchi stuffed – yes, stuffed – with creamy artichoke and chanterelle mushrooms is rich and comforting. So far, so Italian.

Though we were feeling pretty full by this point, we ordered a pudding based on a strong recommendation from the warm and friendly waiting staff… A decision we didn’t regret. Little doughnut balls with a crispy, spiced coating, the smell of which hits your nose you as soon as it does the table, dunked in warm toffee. If you fancy a cup of something hot and a bite of something sweet after winding through the gallery’s halls, this is the dish for you. 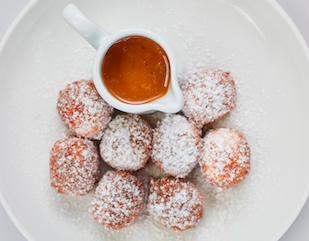