The creation of this blog was greatly influenced by some of the meals myself and the fellow Snobs shared over the course of Britain’s Summertumn (Summer that resembled Autumn), that is why we are starting with a few of the favourites!

Whether it is the sign of age or the thirst for change, I have started to swap the clubs of Cheltenham for the greener pastures of Gloucestershire’s hidden culinary delights. I would spend my day hunting out pubs, taverns, restaurants and even discovered the odd Michelin star establishment scattered about the hills and valleys of this fine county. Scrutinising the menu and creating a shortlist to email to the other Snobs for a Friday night jaunt to satisfy the rumbles and grumbles that plague us all come 5pm. 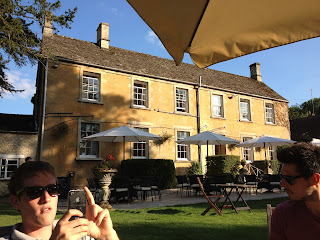 The selection for tonight was The Inn At Fossebridge, a lovely country pub-hotel. The photos that adorned the menu were enough to get the nod from a fellow Snob and a lucky chumbuwumba! 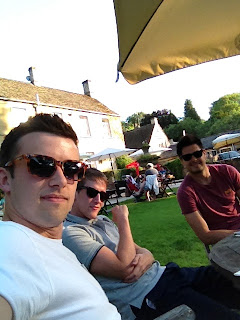 The IAF is a gorgeous old pub covered in ivy with large gardens and ponds and also inquisitive free roaming chickens and ducks. The rarity of sunshine led me straight to the bar for a pint of proper west country cider and we plonked ourselves in the middle of the garden to discuss the possible collection of courses that would best suit our appetites.

After much deliberation and stalling of the waiters, I settled on a starter of Ham Hock and Potato Terrine with a delicious Red Onion Marmalade. Phillip opted for a Mackerel Pâté with a delightful walnut and olive bread and Mark had the Potted Loch Salmon. 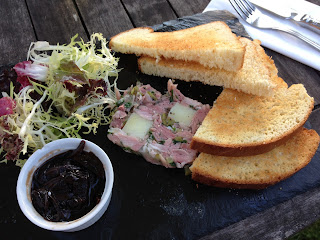 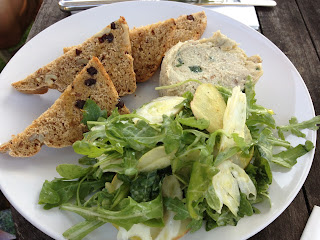 Phillip and I had no problems choosing mains, remembering this blog has no care for calorie counting, we dived straight into the Belly Pork, Black Pudding and Quail Eggs nestled on an Orange Salad. The flavours at work here were incredible and I don’t think I have tasted anything quite like it since! Mark had the Beer Battered Fish with Triple Cooked Chips. 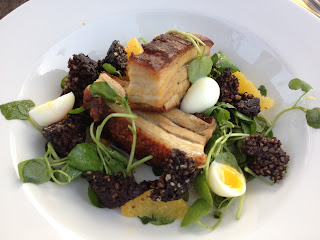 The cider went down well with the pork and suddenly our palates had gotten the best of us and we were examining the desserts menu.  Being the biggest sweet tooth of the group and famously known as not understanding the term “sickly” I was not against this move either!

Whilst waiting for the desserts we took a walk around the grounds and also entertained the chickens that came looking for crumbs that may have fallen from the table. Not a chance at this table! I tried stroking one instead as a gesture of sympathy but it was not impressed and bolted for the hills!

Puddings arrived and did not disappoint. Phillip chose the Chocolate Parfait, which arrived beautifully presented with chunks of honeycomb and fresh raspberries. 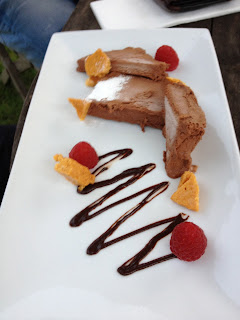 Mark and I selected my favourite of the moment; Croissant Bread And Butter Pudding with a pot of vanilla custard. What I love about this dish is the croissant bread is so soft that it melts in your mouth and was perfectly caramelised on top! 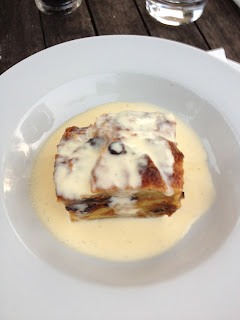 It was agreed that this was by far one of our best experiences in recent memory so therefore caused for further celebration and indulgence. It was decided after a couple of cappuccinos and hot chocolates that Cirencester deserved a visit from The Food Snobs. So we paid the bill, bid farewell to the chickens and vanished into the night along with the contents of my wallet! 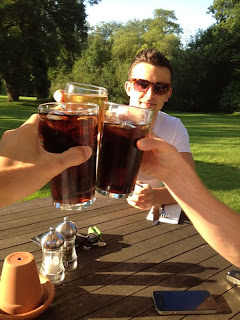 If you are looking for an amazing dining experience and don’t mind paying slightly more for superb food, definitely try The IAF. I shall certainly be going again soon as their menu has just changed for Autumn and has my mouth watering already!