School Dinners is a product of the collaboration between Jack Arts and Cult Events, billed as a night of fine dining, fine wine(ing) and thought-provoking entertainment. A fabulous three-course menu awaited and a long list of performers were readying themselves in the wings, preparing their performances for the night’s dinner guests. I was lucky enough to be invited along to join the press table for the evening and if I am honest, I wasn’t quite sure what to expect. We arrived at Central Foundation Boys School in Shoreditch and quickly took our seats at long banqueting tables in the great hall. The space was amazing, far grander than the days of my assembly halls when I was back at school. 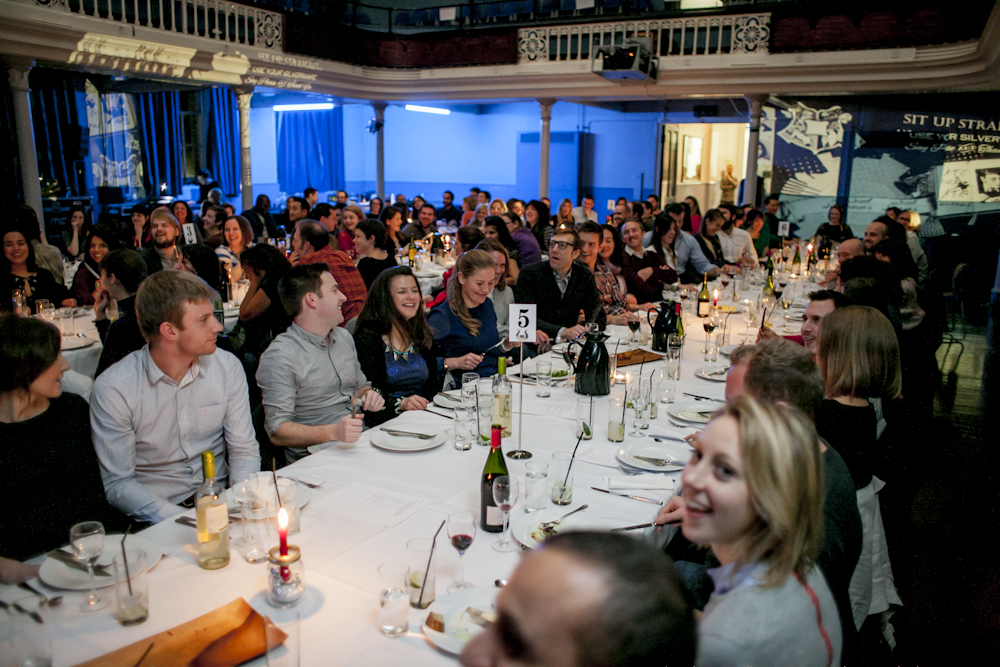 The night commenced with an introduction to the evening’s proceedings from Head Mistress for the evening, Chastity Butterworth, played by Game Of Thrones actress, Gemma Whelan! Starting with a few filthy jokes, it was a little eye opener for what was to come! After that we started the feasting by opening a lovely bottle of red and a refreshing first course of Parsnip, Pear & Mushroom Salad with Celeriac Puree. Perfectly presented with a light and fruity focus, it was a great little opener that was quickly polished off before our first performer of the night took to the stage. 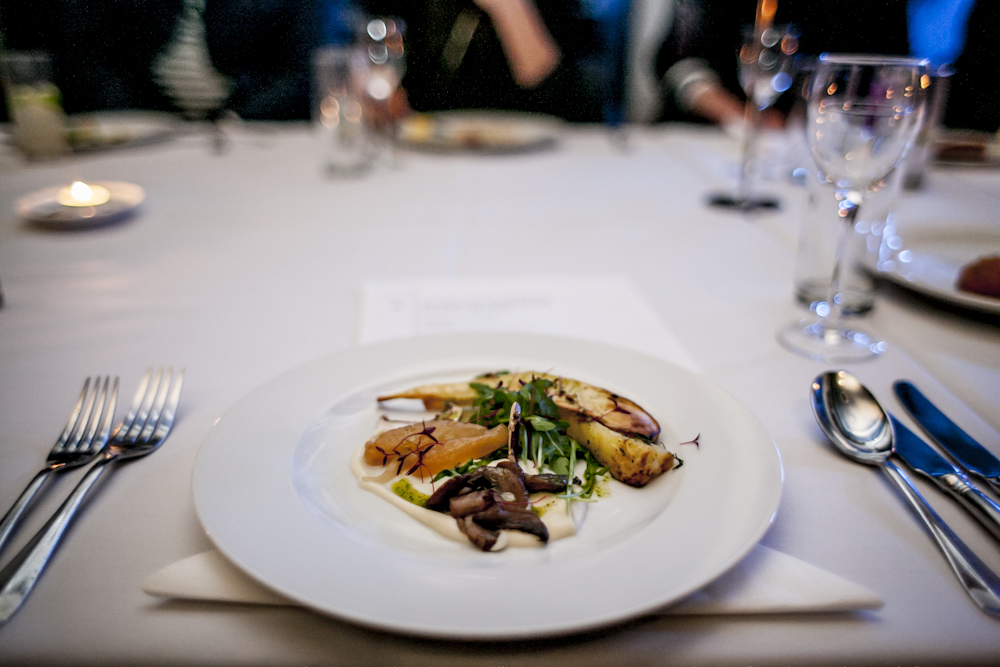 Our first lecturer was Joe Dunthorne, introduced as the Head of English. He is an award-winning novelist, poet and journalist whose first novel, Submarine, became Richard Ayoade’s award-winning film. What a great film too may I add! Joe led dinner guests through a short story that he had created especially for the evening, however it had a few surprises along the way. The audience was faced with several different choices throughout the story, some had more impact on the storyline than others and some created some very awkward but laughable adult-natured twists that had the audience in fits of giggles. 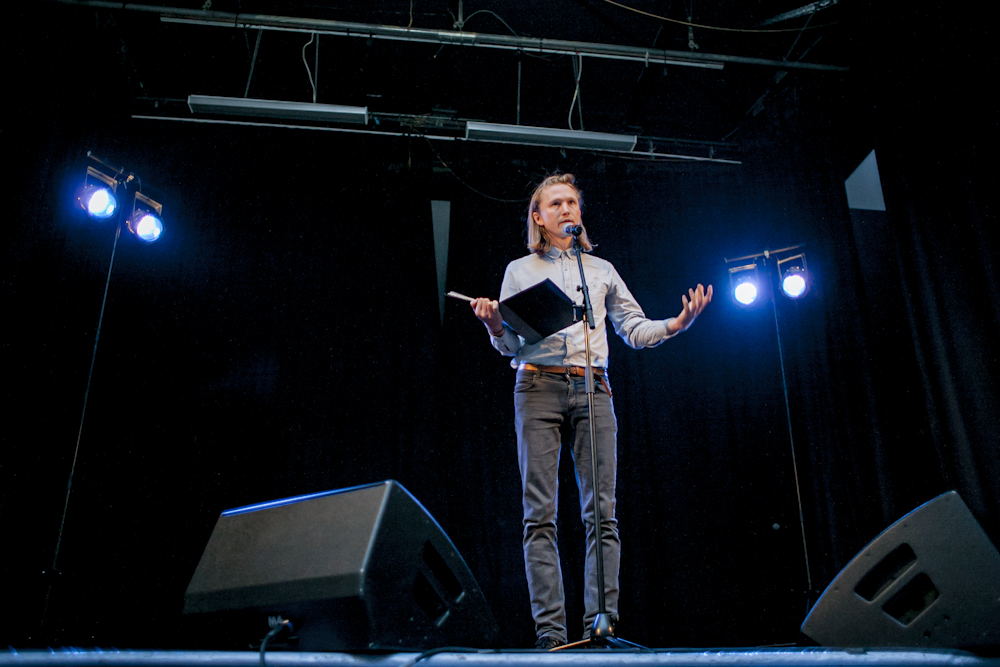 When everyone had finally cooled off from Joe’s sexy short story, the main course arrived. This was a really special dish and one that I had been excited about all week in the lead up to the event. Rolled Belly of Pork Stuffed with Nduja & Apple Sauce! All three of these ingredients on their own are delicious, so imagine my delight at them all combined in one mouthful. It was a memorable dish for sure, the salty succulent pork mixed beautifully with the sweetness of the apple sauce and the spice from the Nduja added a unique twist to this classic dish. Served with Carrots Braised in Orange Blossom Honey & Star Anise; Chilli, Rosemary & Garlic Roast Potatoes and Creamy Brussel Sprout Tops with Citrus. Delicious! 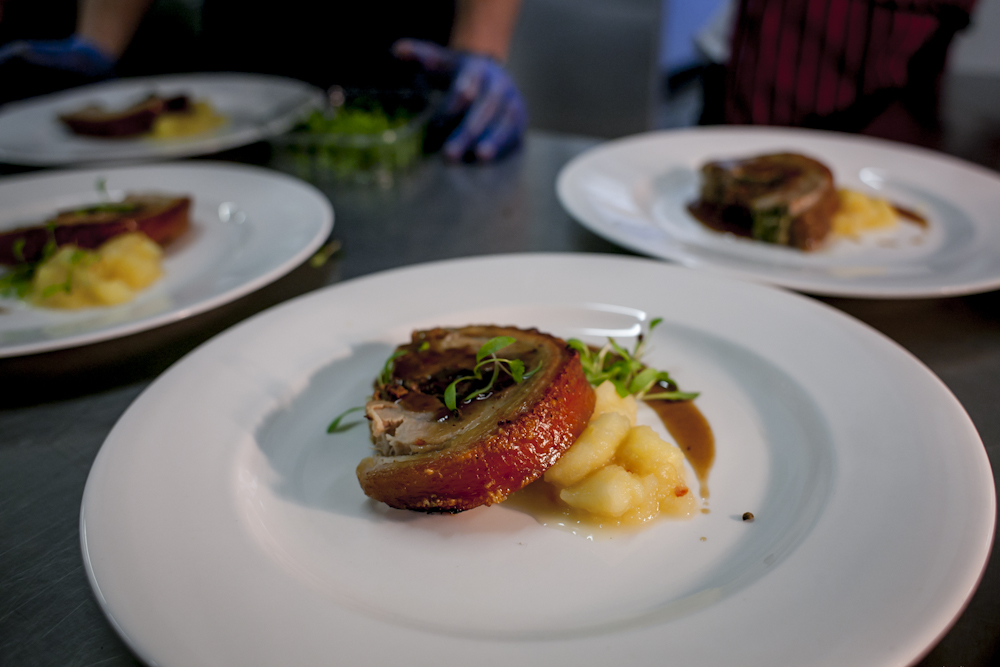 Our second lecture of the evening was from the Head of Music, Ivor Novello nominated musician, composer and Creative Director of the New Radiophonic workshop Matthew Herbert. This was a mind boggling yet extremely intriguing look into the daily thought processes of Matthew and how he views the sound of the world we live in. 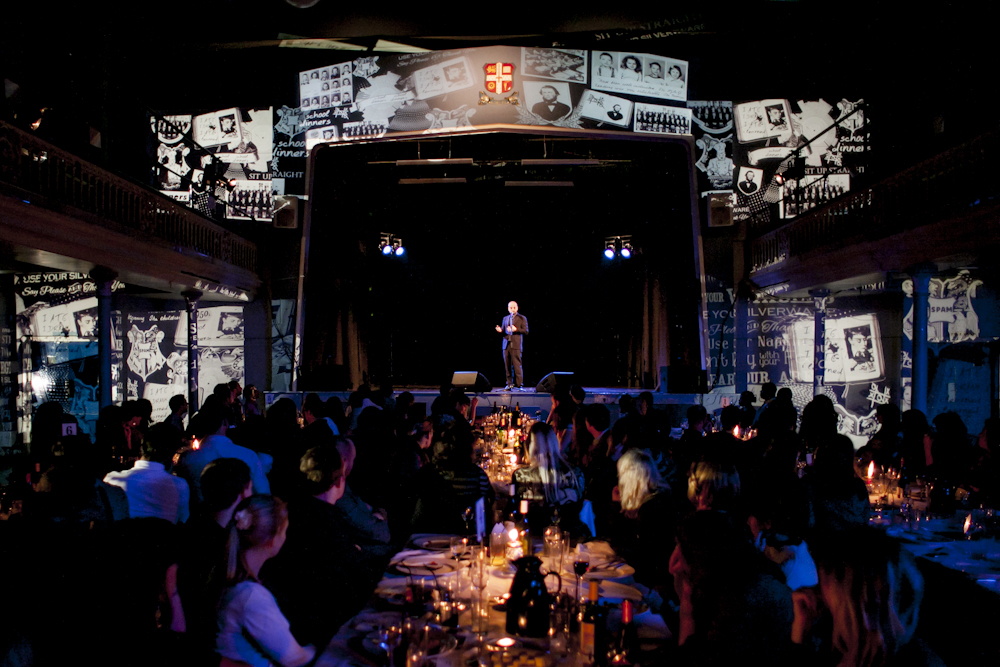 Hollie McNish was next with an incredible collection of spoken word performances. She took the title of Biology Teacher and headed into three different pieces, commenting on humorous topics, such as, becoming a mother and comparing her body to the Transformers that her husband held in high regard after a joint viewing on her very first outing after giving birth. She attacked her verses with perfect diction and at a machine gun pace. It was truly impressive and thought-provoking with a comical twist that demanded a rapturous applause! 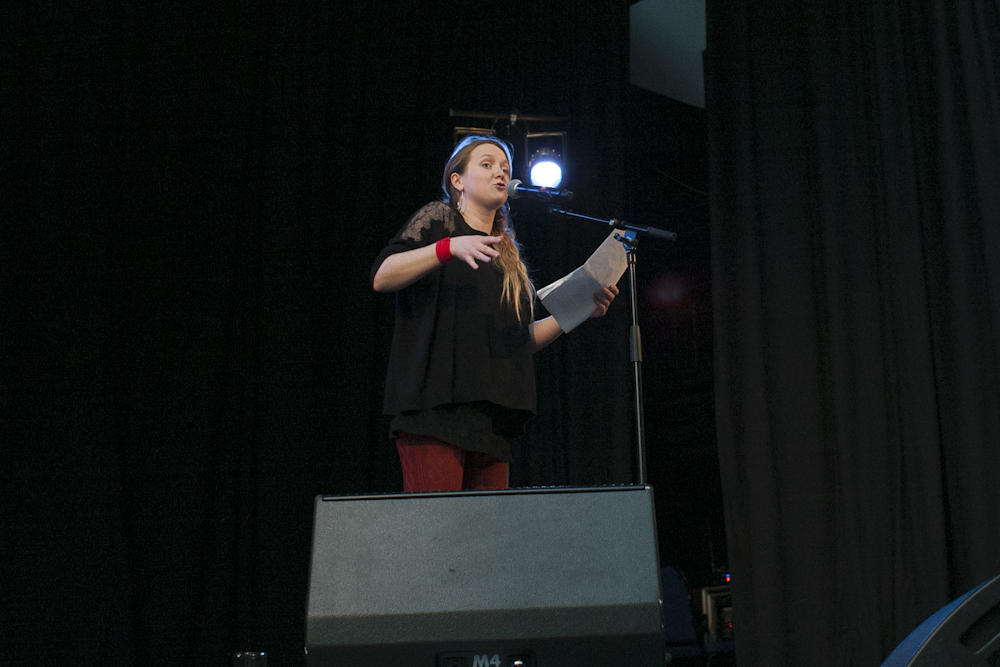 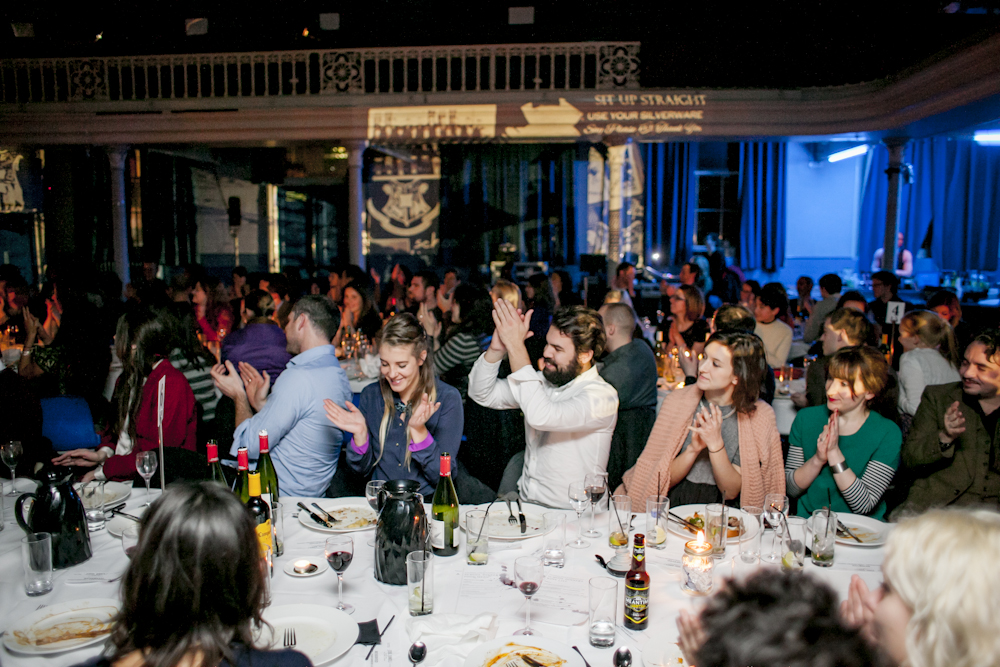 The dessert round was a real treat and produced a modern twist on a school dinner classic; the sticky toffee pudding. We were presented with the Sticky Toffee & Date Pudding with Custard & Toffee Sauce. This was a delicious and extremely moreish finale; warm, moist and finished perfectly with both the custard and toffee sauce combined. 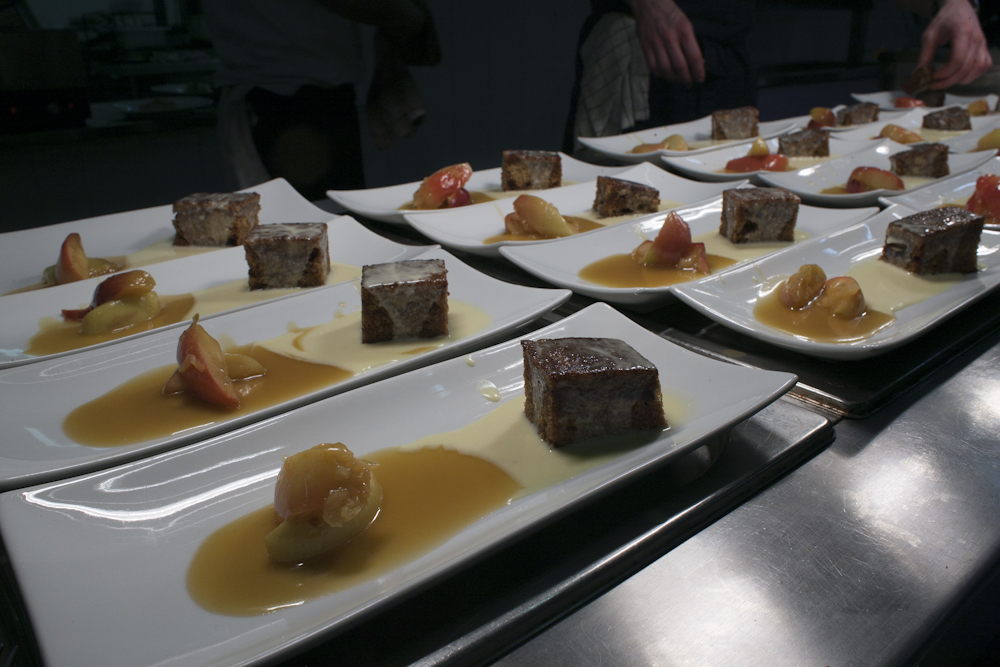 With dessert done, you would be wrong to think that that signalled the end of the evening. Far from it! Two more acts were to come. The first being the “School Band”, one man strong but full of energy and an awesome voice that filled the room at its loudest, yet delicate enough that you could hear a pin drop at its softest. Fred had the whole hall captivated with his two songs and I would definitely recommend that you check him out! 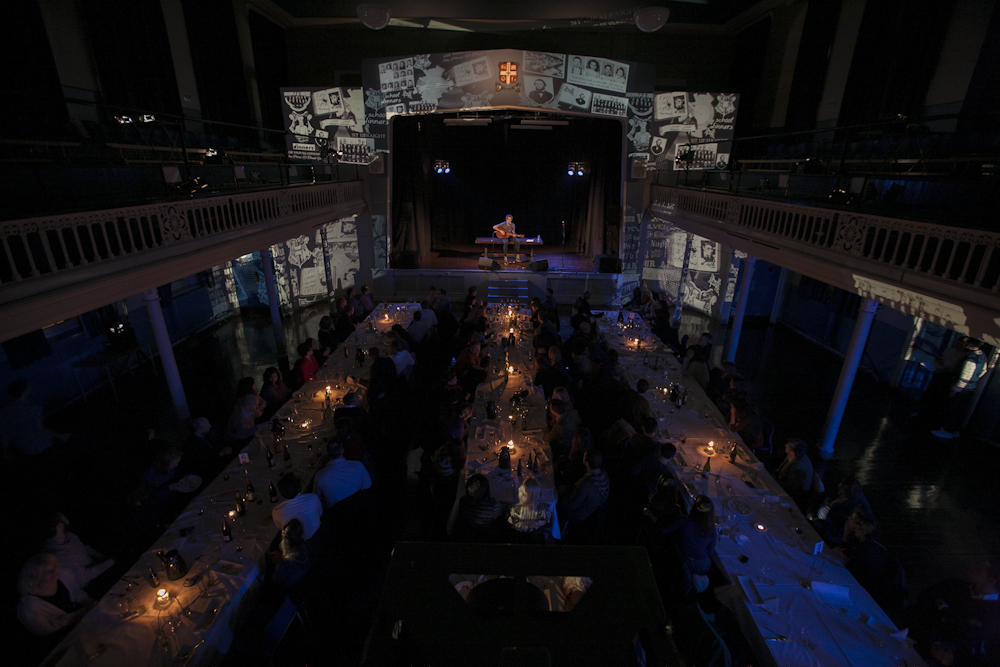 Fred left the stage to another huge applause and on stepped the final teacher of the evening. Jenny Fawcett was the Music & Movement Teacher and was simply hilarious! She quickly dragged a willing audience member up on-stage and fitted him with a pair of tap shoes, invaded his space slightly and helped loosen him up, paying particular attention to the gentleman’s glutes! The music began and her feet were soon a blur as she tapped her way around the stage, with the Michael McIntyre lookalike struggling to keep up, much to the amusement of the crowd. Her attentions soon turned to the giggling crowd and she decided to take us few a few simple steps. Luckily I was placed at the back of the hall so only a small minority had to witness my horrendous attempts. 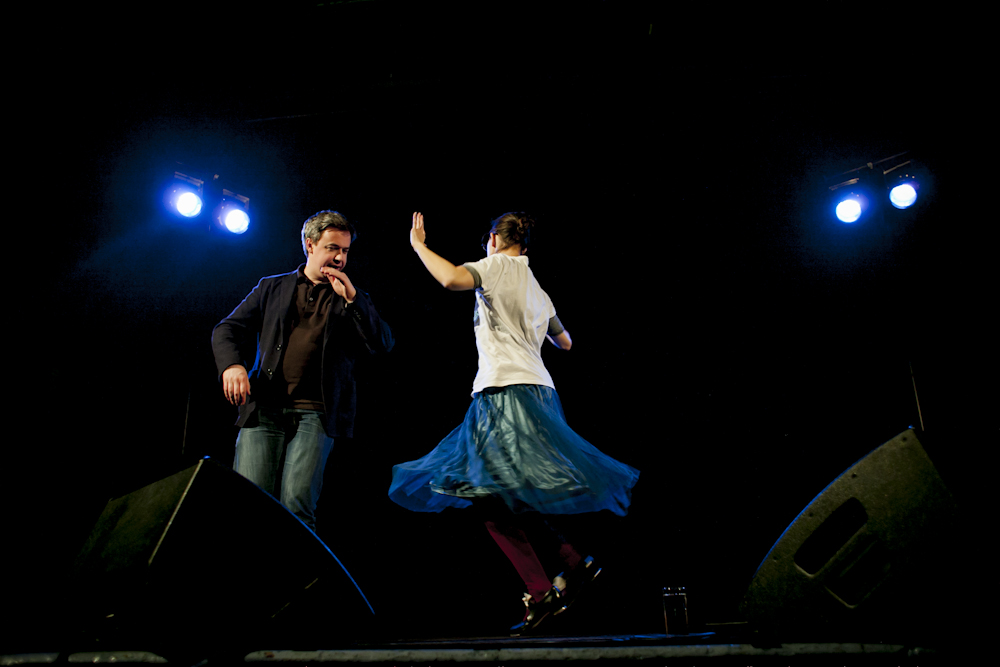 She soon outgrew the stage though and was flying down the aisles in no time, until she found herself a new man and Michael McIntyre was pushed aside, before returning to the stage for a final flurry, with all three arm in arm. 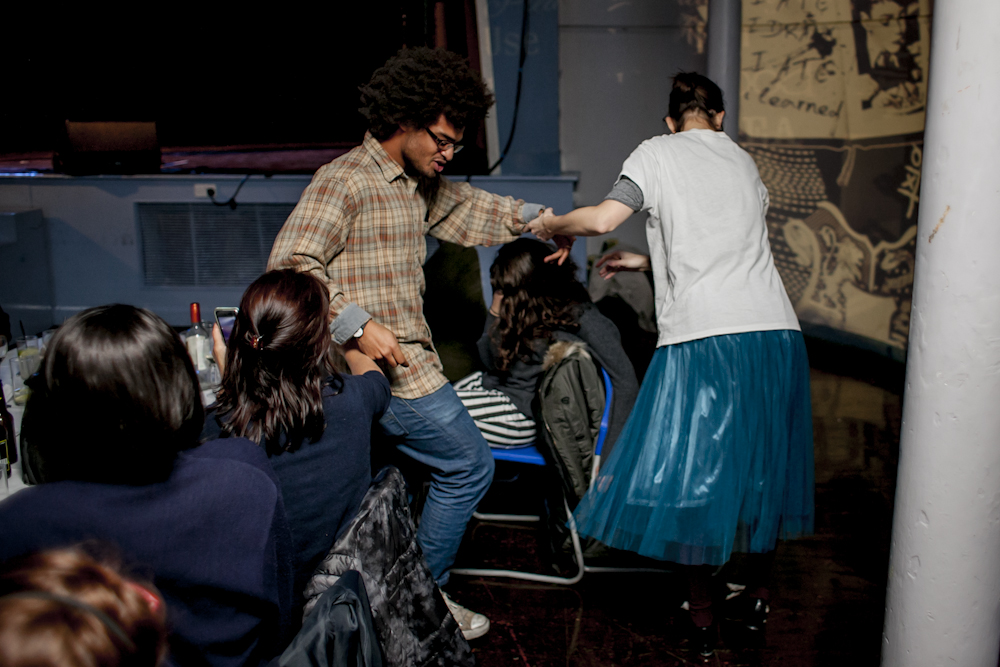 School Dinners was one hilarious evening, which met all my expectations and lived up to its main objective. The food was fantastic and the wine delicious. More importantly though the performers provided a great mix of comedy, music and discussions, which I was pondering for many days after. It is set to return in January and I strongly suggest that you sign up to their newsletter or follow them on Twitter to make sure you know when tickets are released! Trust me, you will not regret it and remember who told you when you’re in fits of giggles, wiping tears from your eyes!