Wow! Surely a London based food company can’t wish for better praise than to be backed by TimeOut magazine in its “London Loves” section? Well sure enough, that is exactly how today played out for Rinkoff Bakery due to their version of the infamous New York Cronut aka The Cro-Dough! After only sampling these beauties on Friday I am finding myself desperate to finish this post and get it out to the masses before I’m too late and everyone knows the score! 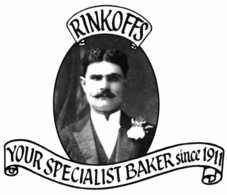 It’s been a couple of weeks, maybe even months, since the original Cronut first landed in NYC and on our Twitter feeds. It was of course met with huge intrigue and scenes of vast queues of food fanatics waiting to get a bit of this new phenomenon. Ever since the launch I have been searching high and low in London, trying to catch a rare glimpse of a Cronut, as I’m a sucker for anything new and quirky. I know The Londoner found The Dosant at Duck & Waffle but that was a slightly different take on the Cronut and I wanted as close to the real thing as I could get it. After all my research I found that Rinkoff Bakeries had the answer in the form of their Cro-Dough. Essentially theirs is the same shape and design but created with their 100 year old croissant dough family recipe! 100 years!!

So with all this being said, when my sister met me in central London on my lunch hour last Friday, I knew exactly where I was taking her. Off in search of this infamous treat! Luckily it was only a couple of stops up the District Line to Whitechapel and a short saunter down a side street, all the while we anxiously waited for the Rinkoff Bakery to appear.

The small unassuming bakery is nestled on a quiet street corner, away from the overcrowded pavements of the high-street and thankfully there were no scenes like the queues in New York. We marched straight inside to find that we had come at just the right time, as stocks were running low. We hastily ordered the final two Cro-Doughs before anyone else could get at them and swiftly made our way outside to begin the inevitable photos and scoffing of these flakey little beauties! 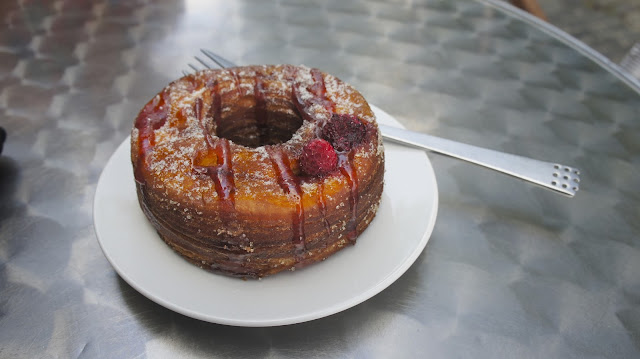 The Cro-Dough comes in three different flavours. Raspberry, Custard and Cream but I have been told that there are new flavours being readied in the aisles so watch this space! We got our hands on a raspberry one and a custard one. 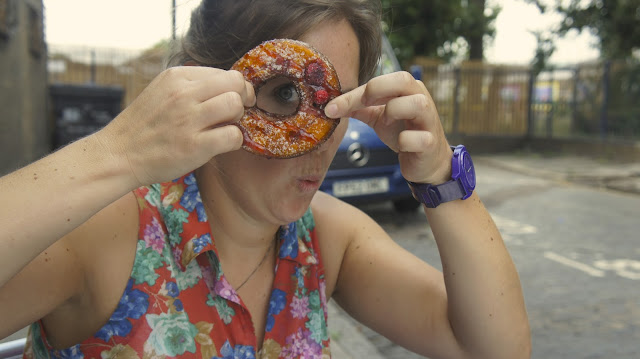 First of all the thing that you notice is that these are far heavier than you imagined they would be. In my head I thought it would be as flakey as a croissant but I guess I just didn’t know what to expect. The realisation is that they are essentially deep fried croissants so the outer shell is a golden brown colour, covered in sugar and the custard Cro-Dough had an added dusting of cinnamon. 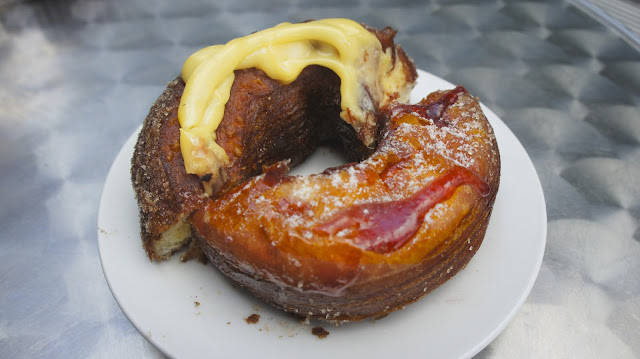 After one bite I was sold! What you don’t realise on first appearances is that the custard and raspberry jam not only covers the top of the Cro-Dough but it has also been piped all the way around the inside too! This coupled with the soft fluffy croissant bread inside and the delicious donut exterior made for one epic mouthful! It wasnt too greasy or sickly as some people had first worried about and you could even taste hints of that familiar croissant flavour, which I thought would have been lost in the frying process. In a nutshell, it was everything I imagined and more! Truly delicious, borrowing the best characteristics from the two original pastries and creating one fine mashup indeed! 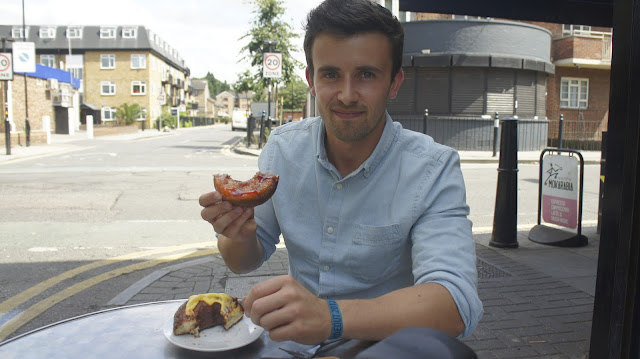 Needless to say these were incredible lunchtime treats and I would have gladly grabbed a few more for the journey home if they hadn’t sold out. If Rinkoff manages to get selling these beauties near the centre of the city I can see them making a small fortune. Be prepared to replace those morning Danish pastries everyone, one bite of the Cro-Dough and you’ll be hooked for sure. I would even be intrigued to see how well the Cro-Dough would do at a food market like KERB in the week. There is a lot of potential for this tasty little hybrid and although the guys at TimeOut beat me to it, I don’t mind one bit jumping on this bandwagon! From the looks of their social media it seems that a lot of people have caught wind of their Whitechapel location now and are travelling across the capital to grab a slice of the action. If you want to do the same head over to the bakery early before they sell out. Find it at 79 Vallance Road, Whitechapel and tweet us a picture when you get your hands on one!