There’s a new Korean joint in Shoreditch and it comes only a few months after the opening of Jubo’s residency at Bedroom Bar. It would therefore seem that Korean Drinking Food (Anju) is here to stay and I don’t mind one bit! I’m talking about On The Bab and it’s fast becoming one of my favourite new openings!

On The Bab is nestled in the heart of Shoreditch at 305 Old Street, just off of Hoxton Square, a few doors down from one of my favourite drinking holes, Common. Their mission is to create the best Anju in East London, whilst pairing it with a delicious lineup of drinks. I was lucky enough to join the press table after work one night but loved it so much that I have been back a number of times already! 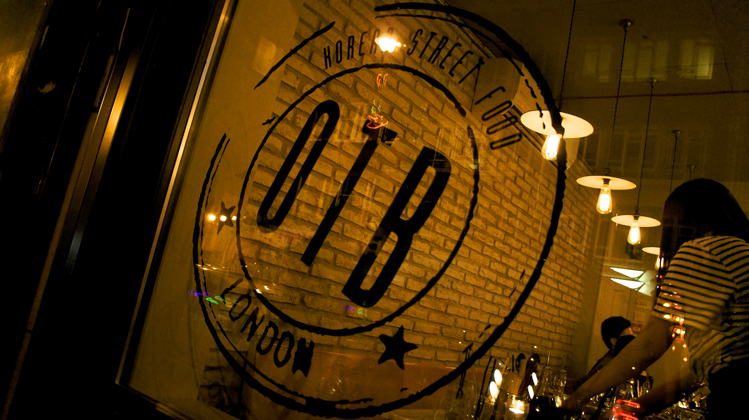 The interior is typically Shoreditch, with exposed brickwork and the textbook crazy filament lighting with the dimmer turned low. It’s a relatively small place but it works. Built more for a catch up with friends and a lively drinking session rather than a private one to one. It is Korean Drinking Food after all!

When I arrived, there was already a great atmosphere inside, as diners were chatting over the menu, sipping cocktails and looking on as the open kitchen cooked up a storm. I was welcomed by owner Linda Lee, who has got to be one of the most friendly restauranteurs I have met to date. She was keen to get us sorted with cocktails, so I took my host’s advice and headed for the list of Soju mixes. Soju is a clear spirit that is predominantly made in South Korea. The two major Soju distillers, Jinro and Lotte are the first and third top selling alcohol brands in the world, so it had to be good right? I ordered the Soju Breeze, a mix of Soju, Cranberry Juice, Grapefruit Juice & Lime. It was smooth, sweet and fruity and went down far too easily. I knew instantly that I’d be ordering a fair few more of these! 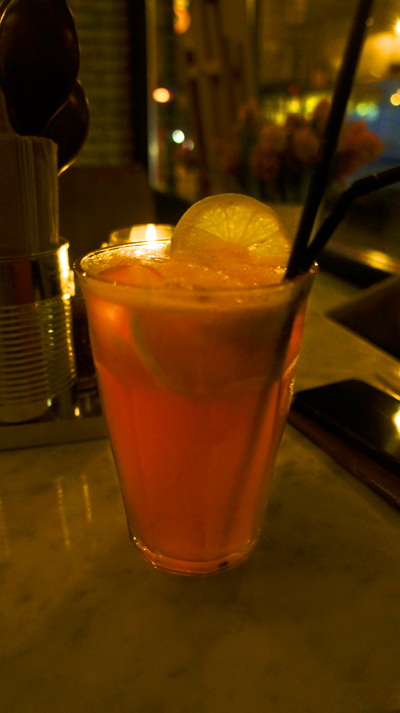 The menu was extensive with so much choice that I had no idea where to start. Luckily the plan for the night was to sample some of their best dishes, so I didn’t have to choose. We started with the Small Dishes and some Anju staples, Pa Jeon, a Spring Onion & Seafood Pancake and also both the Chicken & Kimchi variations of Kun Mandu (Pan Fried Dumplings). All washed down with a So Maek, a great little Korean creation of Soju and Beer served in some quirky little chilled metal flasks. 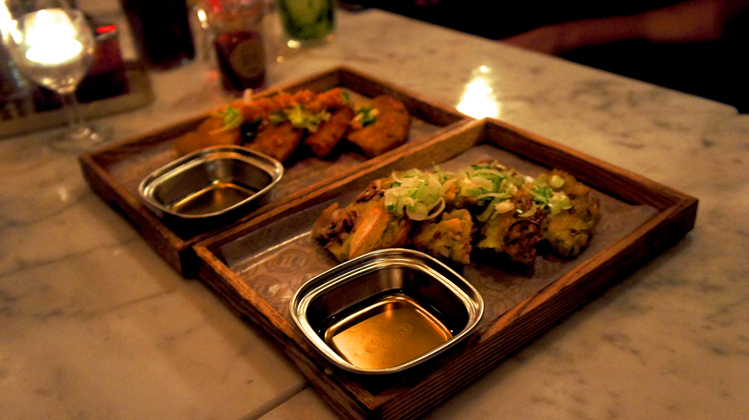 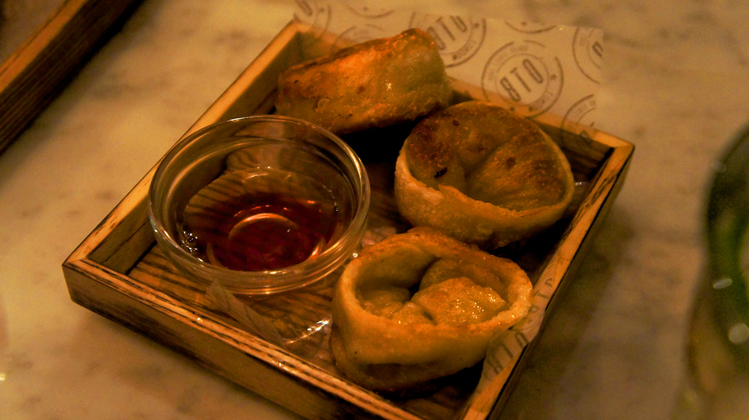 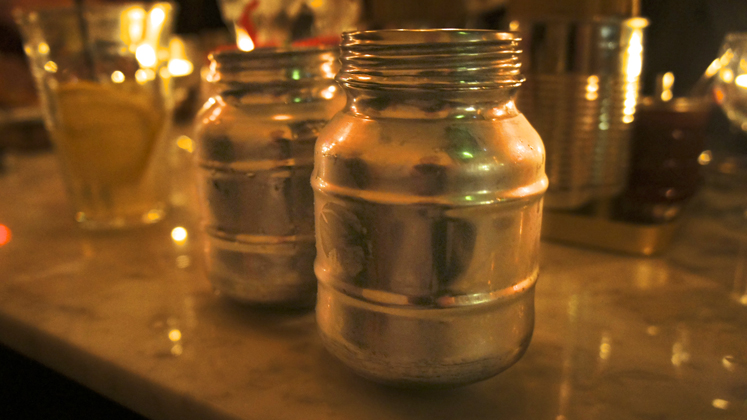 My eyes then lit up when I saw the next dishes arriving. As soon as they hit the table, everyone’s attention was immediately drawn to the pillow’esque steamed buns and the contents within them. I first tried these via the fabulous Yum Bun located just outside Old Street Station and have been in love with them ever since. The buns have a soft texture like no other and are the perfect housing for a delicious filling such as Bulgogi Beef, Spicy Pork, Spicy Chicken or even Vegetable Fritters as I found out at On The Bab! You see, I was only able to get my hands on a veggie option at the press night, which, mind you, was far better tasting than I had imagined mind. However, on my return, I had my way with a Bulgogi Beef and it was incredible and slightly addictive! 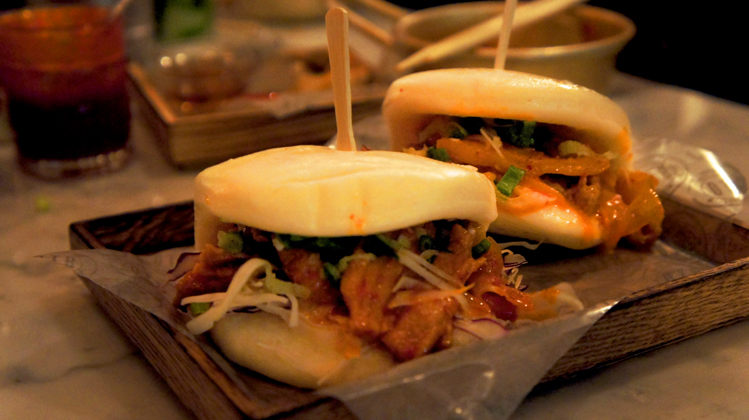 The main event though and my personal favourite of the night, was the Yangyum Chicken (Korean Fried Chicken)! Rustled up with Crushed Peanuts and a choice of either Soy Garlic or Sweet Spicy Sauce and served with Radish Pickle. This stuff is so good that you can not possibly pay On The Bab a visit without ordering a tray of this. I recently went back again and had to buy a large portion, just to satisfy my craving.

When discussing the difference between On The Bab’s Yangyum and that of Jubo, Wilkes888 and I both agreed that each are deserving of high praise but it is the texture that defines them. Jubo produce a really crispy skin, whereas On The Bab’s is covered in a glaze that makes the skin soft and sticky. Both are extremely moreish though! 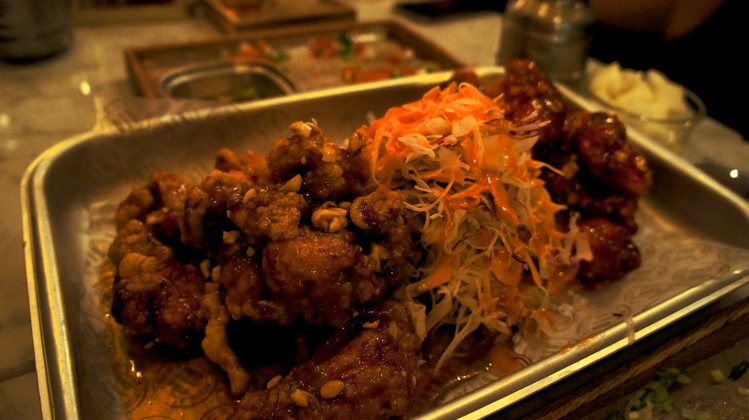 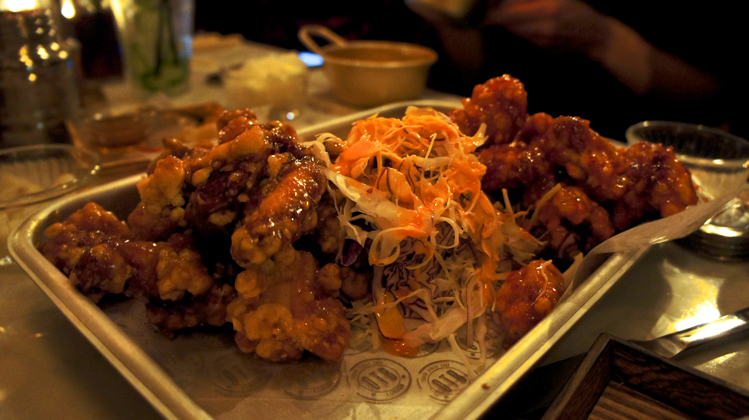 So with only the space for a final Soju Breeze left in me, I conceded to the feast and let the others finish the final few dishes. It was an excellent evening of incredible Korean comfort food and as I said before, I have already been back since the press night and plan to make a great deal more stops very soon. If you frequent the streets of Shoreditch often then you definitely need to have On The Bab on your list of great new openings to sample. Don’t forget that this is Korean Drinking Food too though, so make sure you hit up some Soju Breezes and a 6 pack of So Maeks!