If you were on Twitter this Tuesday you probably caught sight of the #NationalBurgerDay hashtag. It wasn’t hard to spot as it was trending throughout London all day. This was mostly due to an initial flooding of the Twitter feeds by the majority of the foodie community with burger related anticipation which, as the event drew on, turned to a pictorial onslaught of our favourite meaty friends from every conceivable angle, dripping in melted cheese and stacked high with bacon and more. The team behind this celebration? Messers @Mr_Hyde & @Tweat_Up. And the venue? One of my favourite hangouts in London. Dalston Yard, a roofless warehouse, who’s charm increases as the sun dies down and the stars come out! They had invited 10 of the cities finest purveyors of patties to come and sling their goods at the first ever night dedicated to arguably the greatest fast food ever created!

The agenda for the night was of course to sample as many burgers as possible! I spent the best part of the day drooling over the menu; trying to create a shortlist of “must try” burgers just incase the coveted big 10 wasn’t going to be a realistic feat. 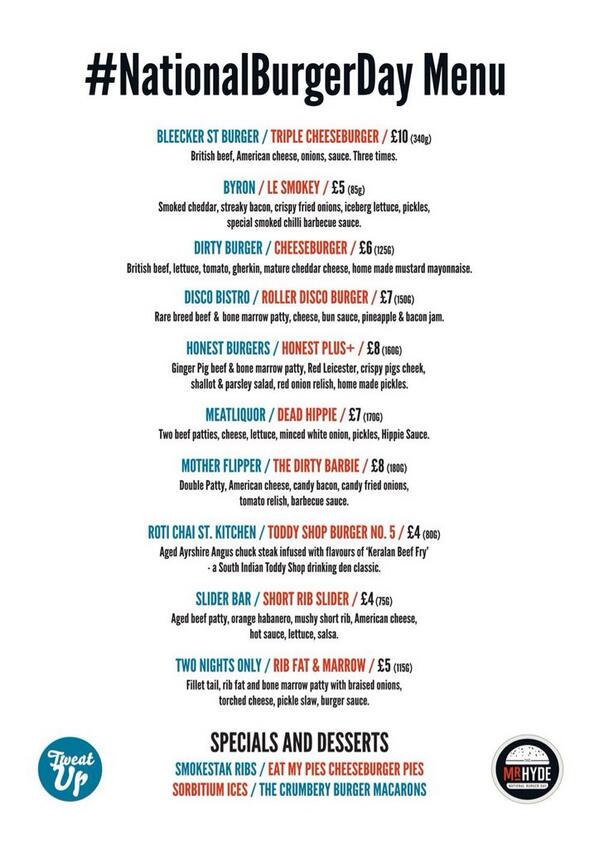 I figured that I had already been lucky enough to indulge in Disco Bistro‘s Roller Disco Burger a couple of weeks back and MEATLiquor‘s  Dead Hippie burger back in 2012 (wow time flies!) Both notably brilliant in their own right, especailly the Roller Disco Burger with it’s Pineapple and Bacon Jam, that stuff is incredible! But this time they’d have to take a back seat where I was concerned. So with only  two definitely crossed off the list, I headed to Dalston Yard, camera in hand and a raging appetite, which needed satisfying!

When we got through the gates, we were delighted to see that the tickets entitled us to a free pint from the guys at  Meantime Brewing Company. I opted for a glass of the IPA, a favourite tipple of mine. I was loving the fact they had brought a small lorry with a giant tank of beer on the back, it worked as the perfect backdrop to their stall. 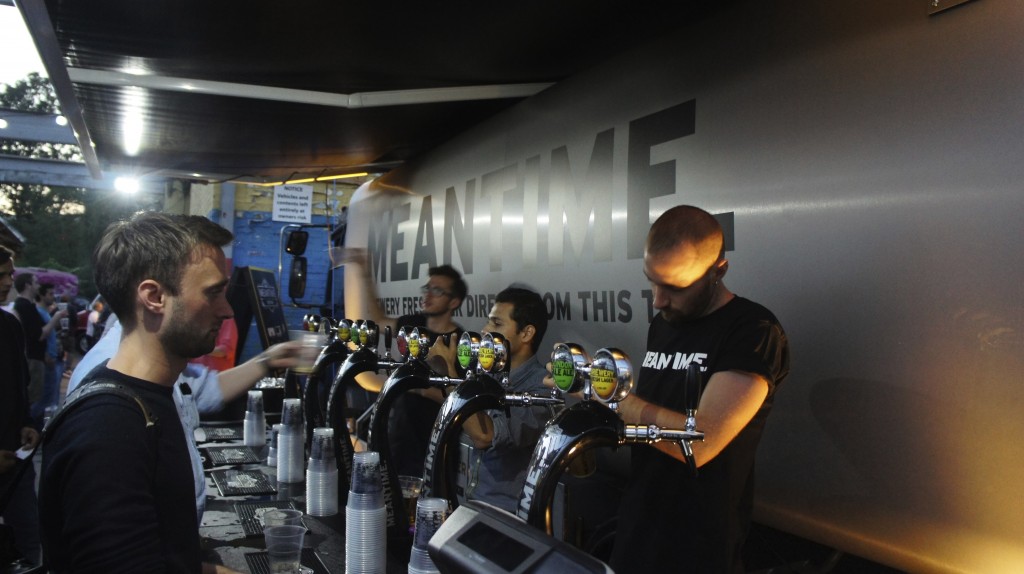 After arriving a little later than expected, we were starving and fully aware that some people had already knocked back their first burger and they were queueing for the next one! We decided there was no time to sit and sip our pints casually, we needed to get involved! The yard was full of foodies deciding where their next burger was coming from. Everywhere you looked people were snapping burger shots, some of the more serious ones were even discussing the successes of individual ingredients! 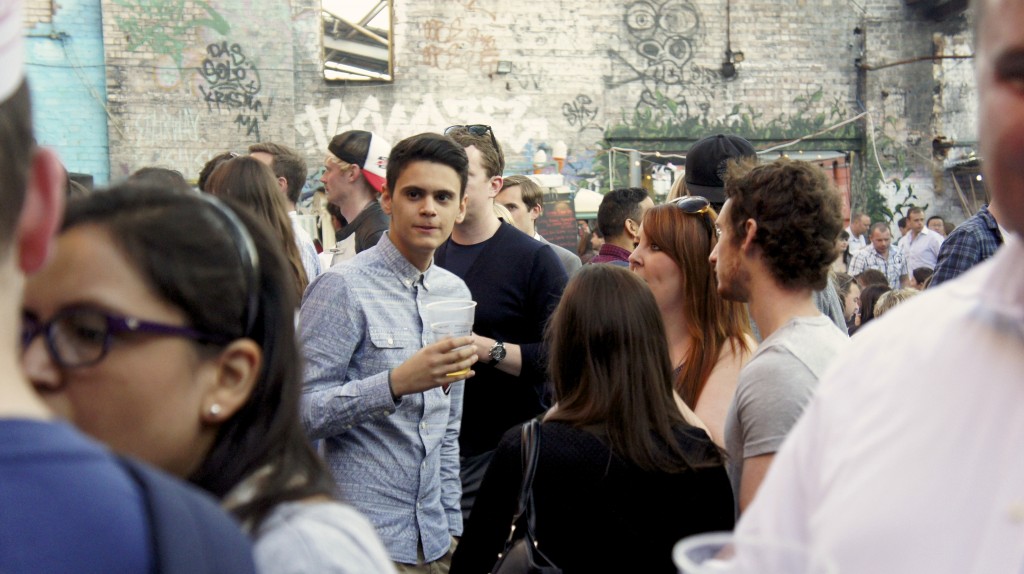 There was a bustling atmosphere though and everyone seemed to be enjoying themselves (must have been something in the Meantime!) 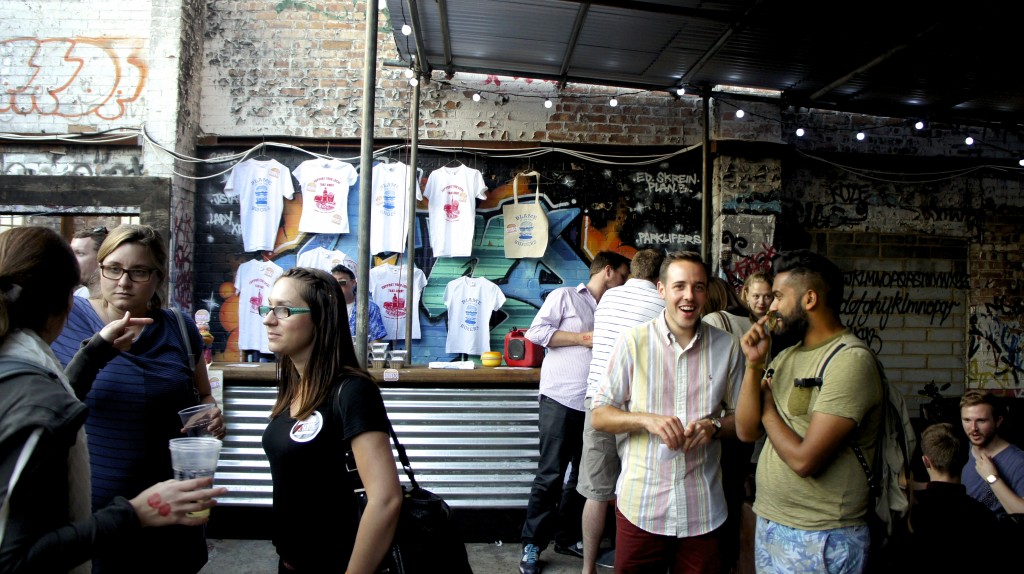 I decided, like many others, to sniff out Honest Burger. This was high on my list of priorities as they had created a new burger especially for the night. It was called the Honest Plus+ and the ingredients list made for an eye-catching combination that just couldn’t be passed up. 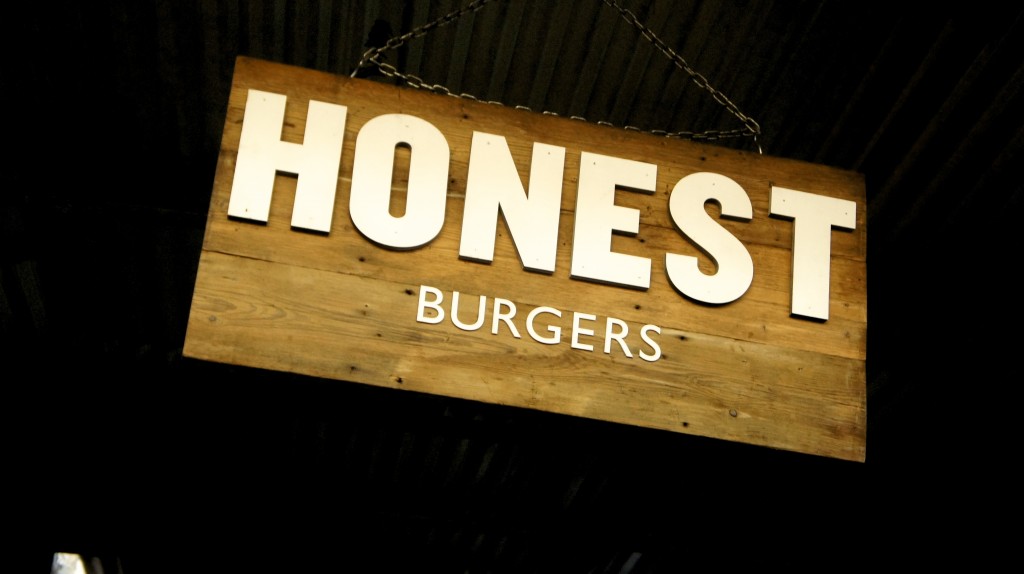 The Honest Plus+ formula consisted of a Beef & Bone Marrow Patty, Crispy Smoked Pigs Cheek (a favourite of mine, first sampled in the Opera Tavern’s Slider Decider entrant), Mature Cheddar, Red Onion Relish, Shallot & Parsley Salad and topped with pickles. I was sad to see the Smoked Pigs Cheek Scratchings had sold out again though, I am still yet to try these! 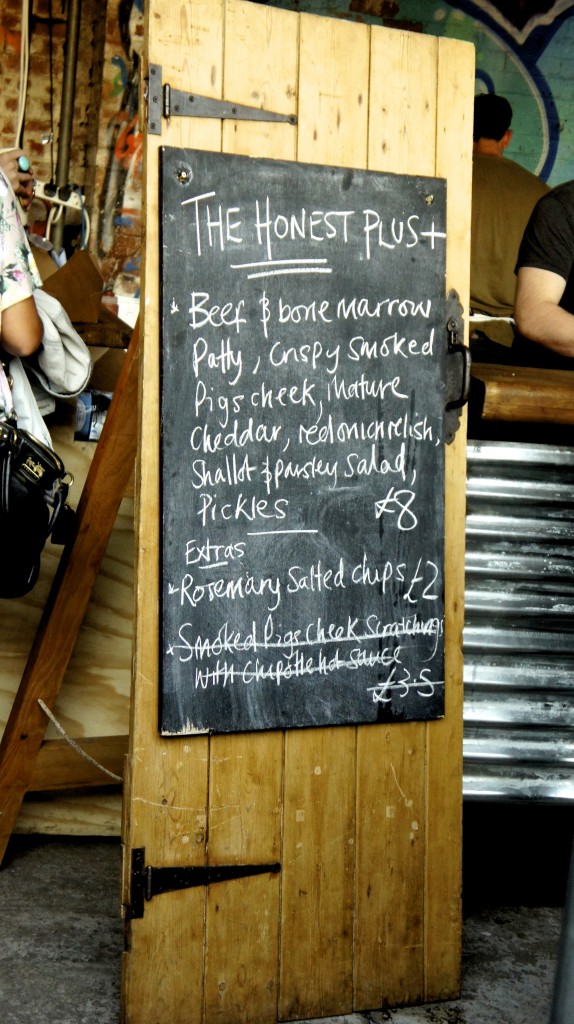 The Honest boys were in high demand and frantically preparing and creating burgers for the masses! 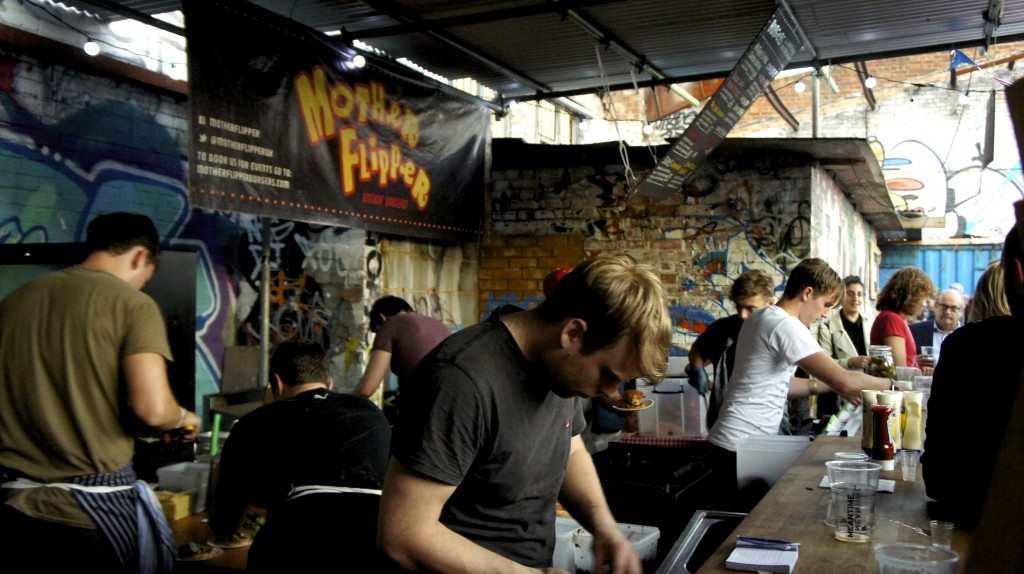 The orders just kept on coming! 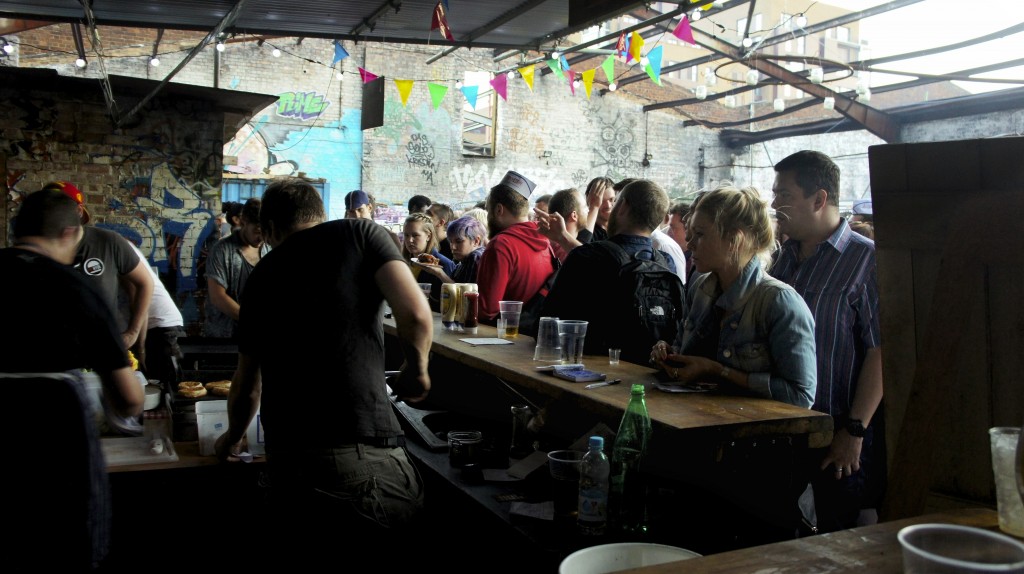 It wasn’t long till my Plus+ arrived though and I was soon jumping on the bandwagon and taking my burger on a mini photo shoot. It looked so good I knew it wouldn’t take long for me to chow this baby down. The melted cheese covering the thick patty was so inviting and in no time at all I was tucking in. 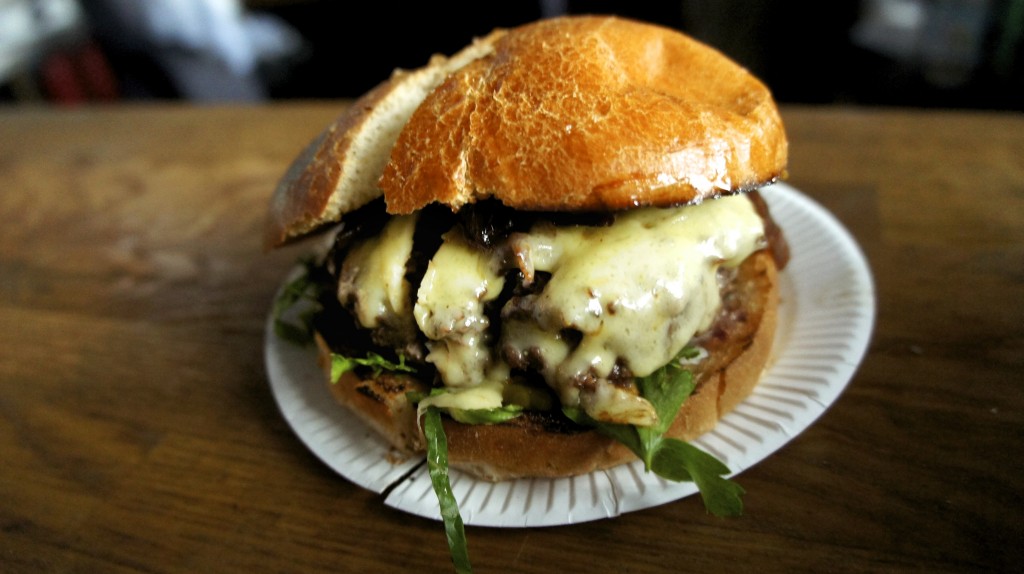 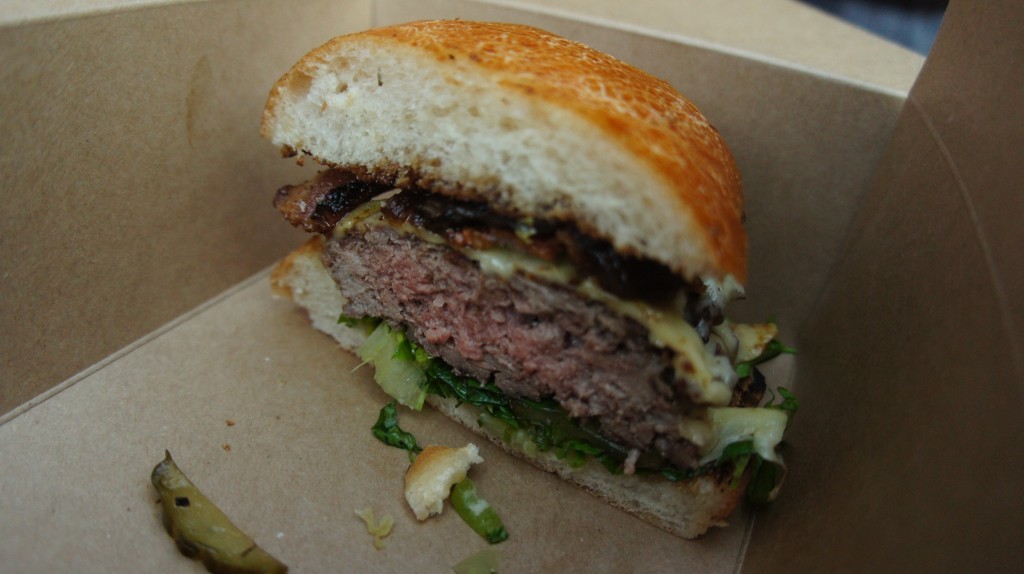 A bit over  done for my liking but I couldn’t complain when they were churning them out at a ridiculous rate for hundreds of people. The patty was really beefy however and very juicy. The bun handled it well though and moulded to it perfectly. The pigs cheek stepped up to the plate and delivered that intense smokey flavour warranting its inclusion and also adding a satisfying crispy texture to every bite too. It has been a while since I had my first Honest Burger and the Plus+ reaffirmed just why I had been so compelled to write about them all those months ago. 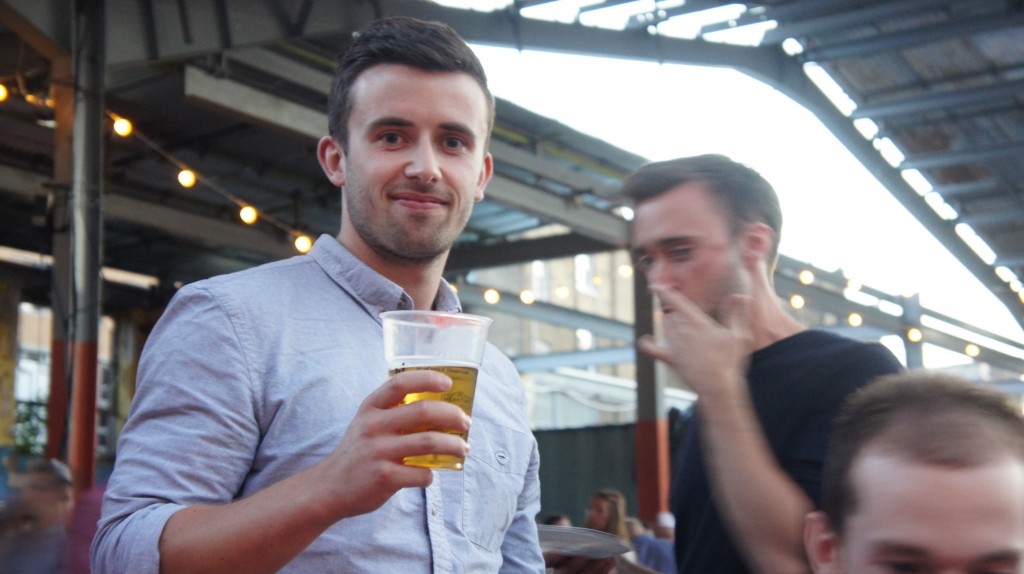 A quick palate cleanse with some more IPA! 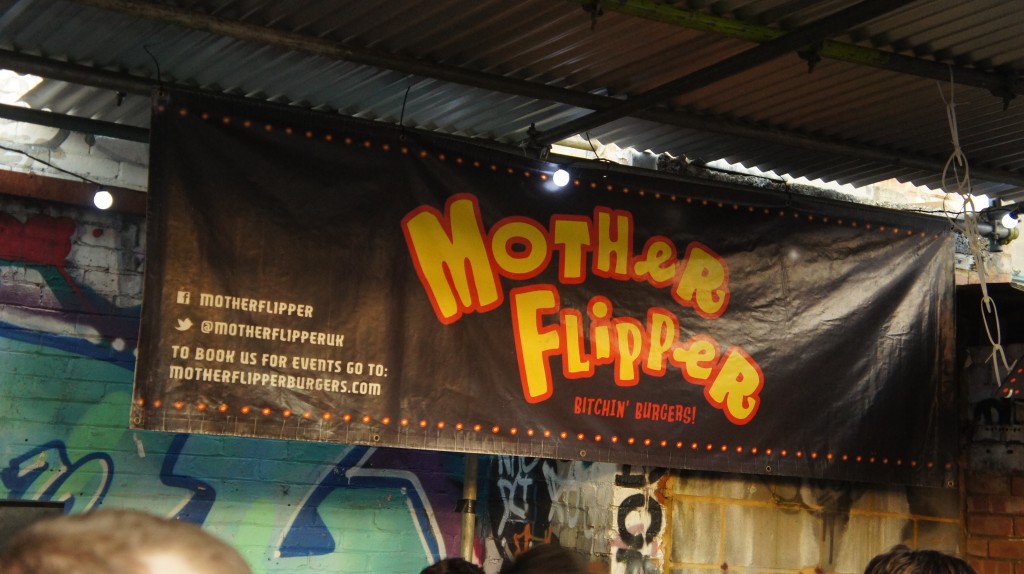 Then we joined the end of the queue for Mother Flipper and their “Bitchin’ Burgers!” 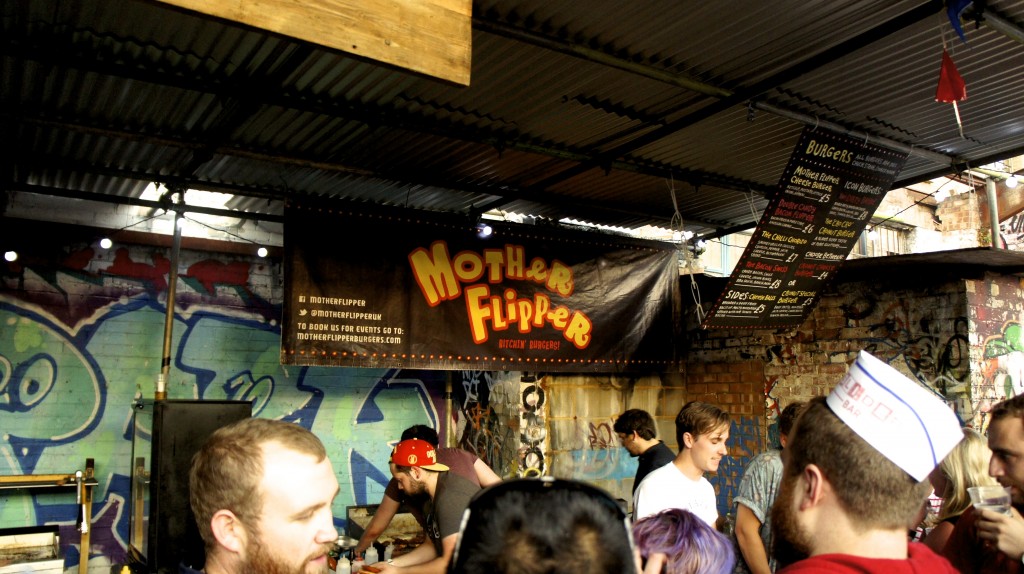 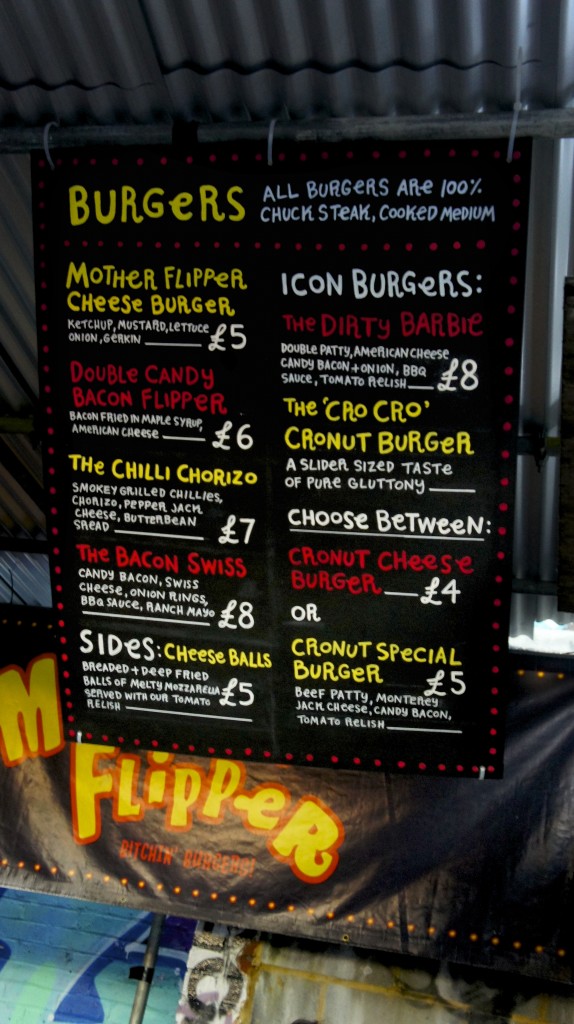 However, this presented me with a problem! Only recently had I realised that Mother Flipper have created a Cronut burger. With my latest adventure to the  Rinkoff Bakery igniting my passion for these deep fried phenomenons, it was just too hard to resist trying their ‘Cro Cro’ Cronut Burger instead of the Dirty Barbie burger that had been created for the night. What I hadn’t realised though was that the Cro Cro was slider sized and after a 30 minute wait I was expecting the giant cronut I am used too! 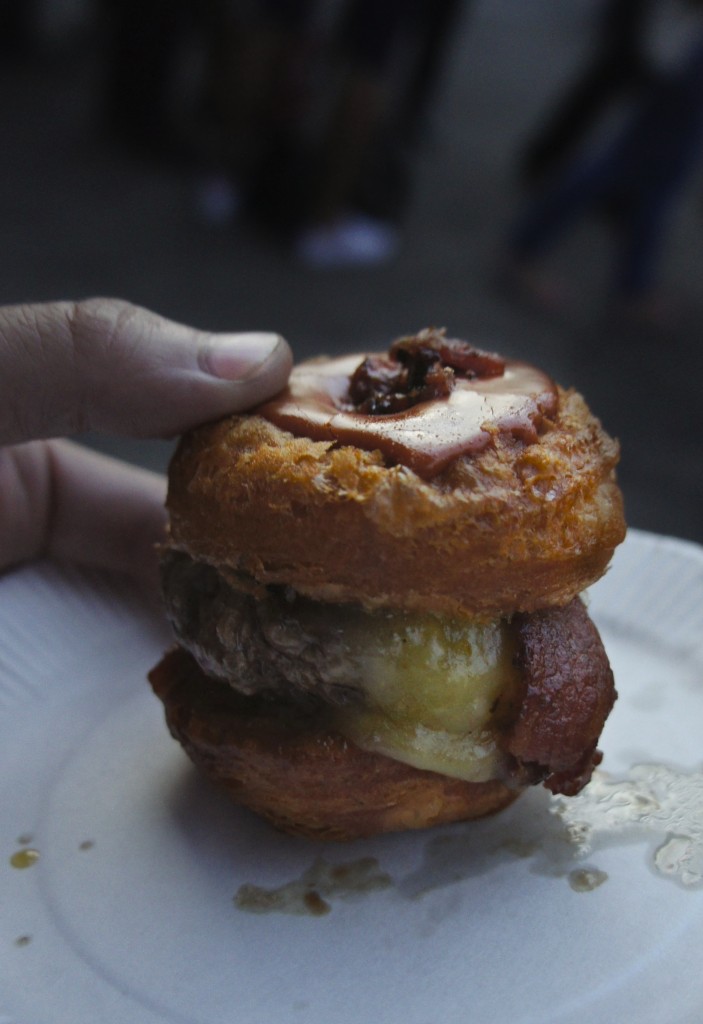 The Cro Cro was made up of a delicious and miniature Cronut filled with a slider sized Beef Patty, Monterey Jack, Candy Bacon and Tomato Relish. If you’ve followed We The Food Snobs for a while, you’ve probably heard me rant on about how I wish someone would create a donut burger after having sampled one produced by Bompas & Parr in 2012. Well the cronut was the closest thing I’ve tried since then and although it didn’t quite match the donut burger, it was a delicious little treat that packed a surprisingly large punch of flavour. The sweetness from the Cronut merged perfectly with the salty bacon and patty to deliver a  unique mouthful worthy of its inclusion in National Burger Day history. It got a lot of fuss and fanfare on Twitter and you can see why. The baked good of the moment, mixed with incredible burger ingredients was always going to be a winner in my books!

By the time I had finished my last bite of the Cro Cro, the place was bouncing and the crowds were still growing! 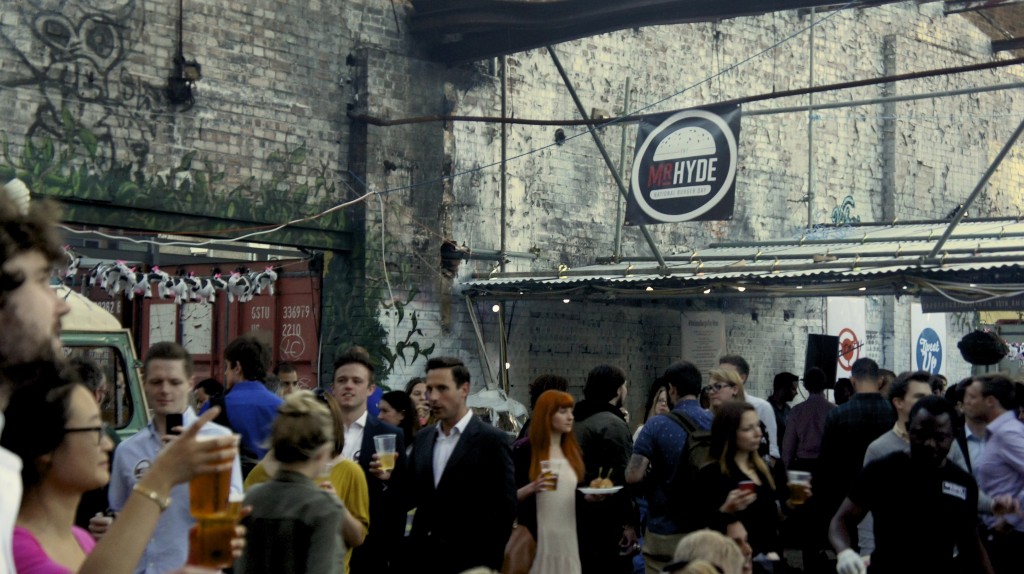 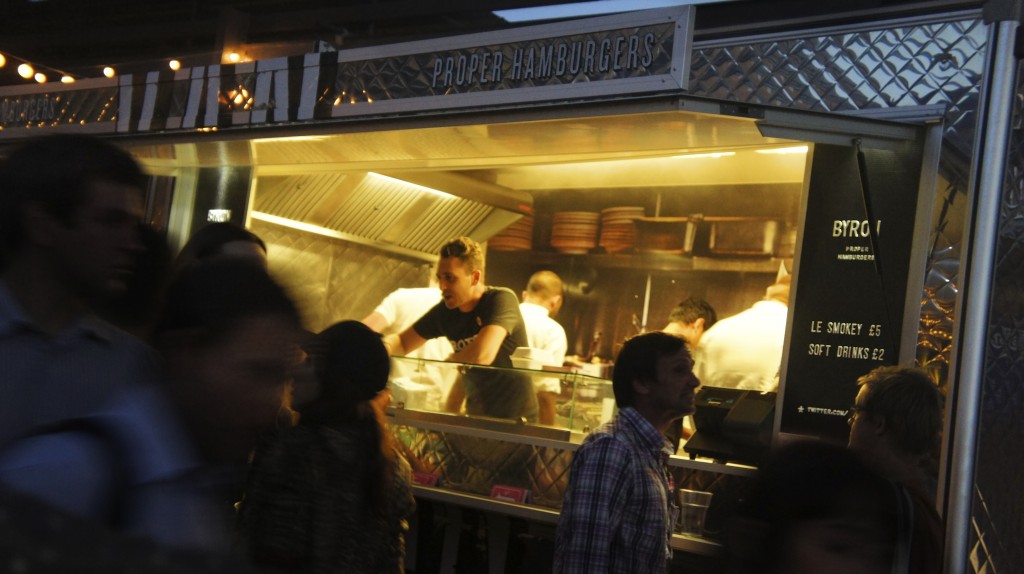 As the Cro Cro was just a slider, I thought I’d hit my next burger up quite quickly. I reutrned to the Meantime truck to refill my pint and then got caught up in the queue for Bleecker St. Burger. Can you believe after all the times I’ve been to KERB at the Gherkin, I’ve only managed to try Zan’s burgers twice! This probably has more to do with the incredible choices that KERB has to offer I think. Zan quickly approached my friend and I and asked if we were going to have the single, double or triple!? Needless to say we looked at each other and confirmed what we both were thinking…”TRIPLE!” 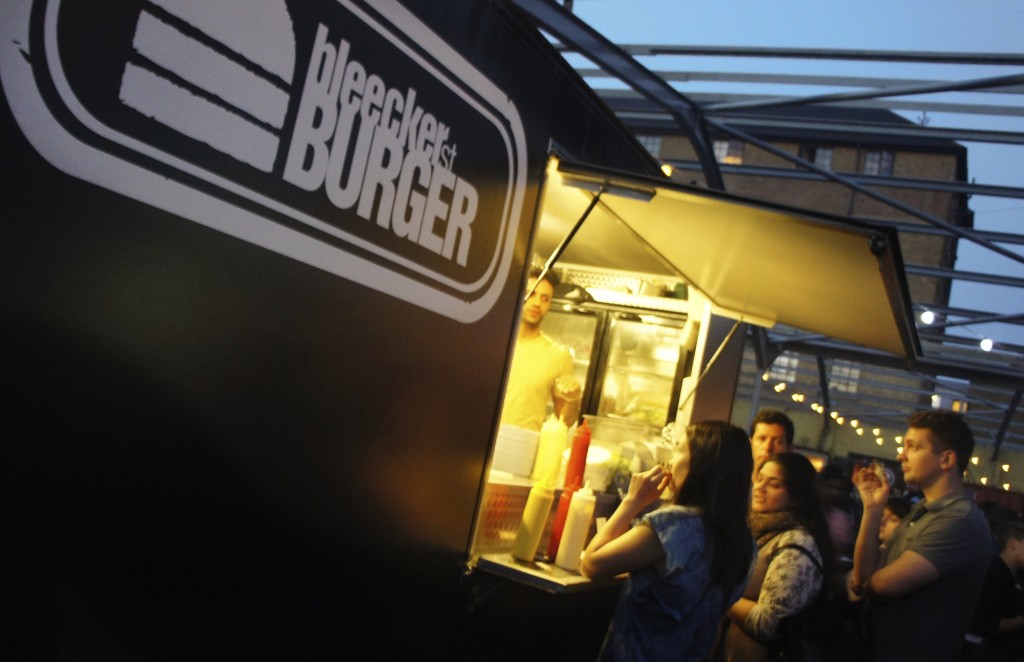 As soon as they started stacking the triple in front of us, we knew this could be a game changer in terms of the 8 burger target. The thing was huge and looked amazing, I couldn’t wait to get my hands on mine! 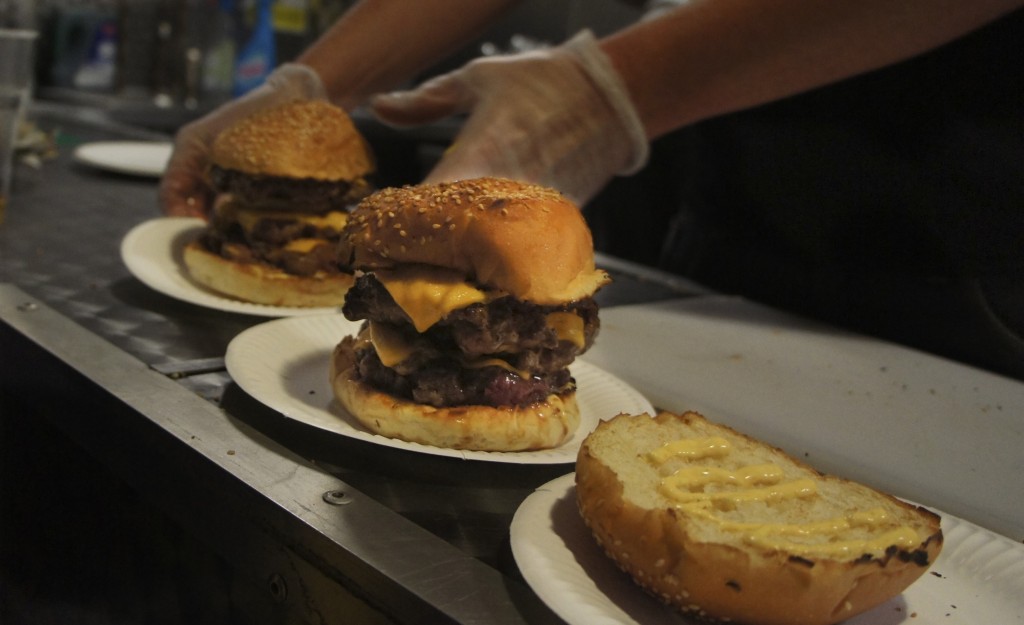 You knew just from the sight of it that this was going to be one of the best burgers of the night. 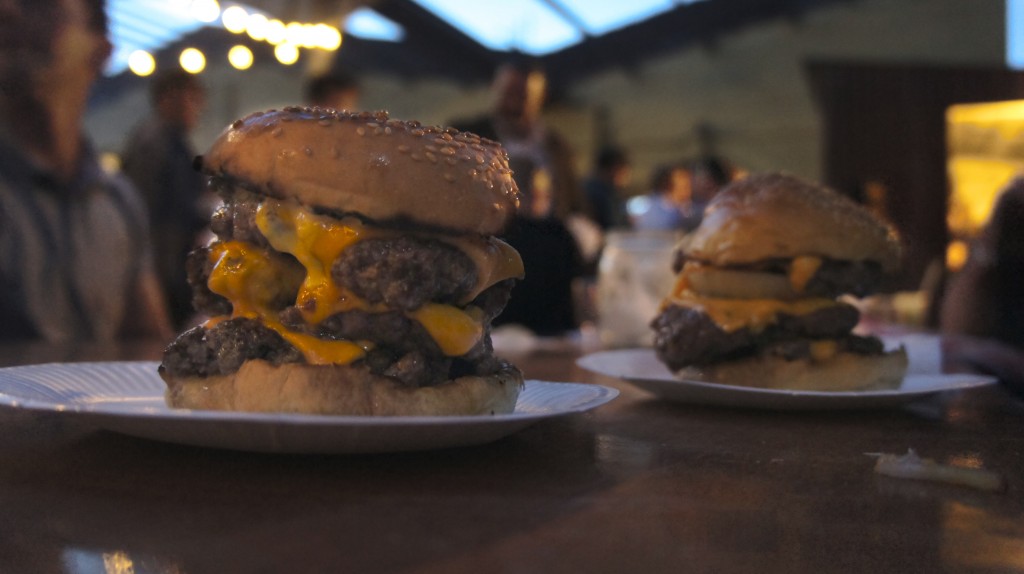 I heard some people were even stacking another patty on top and going for the quad! Crazy! 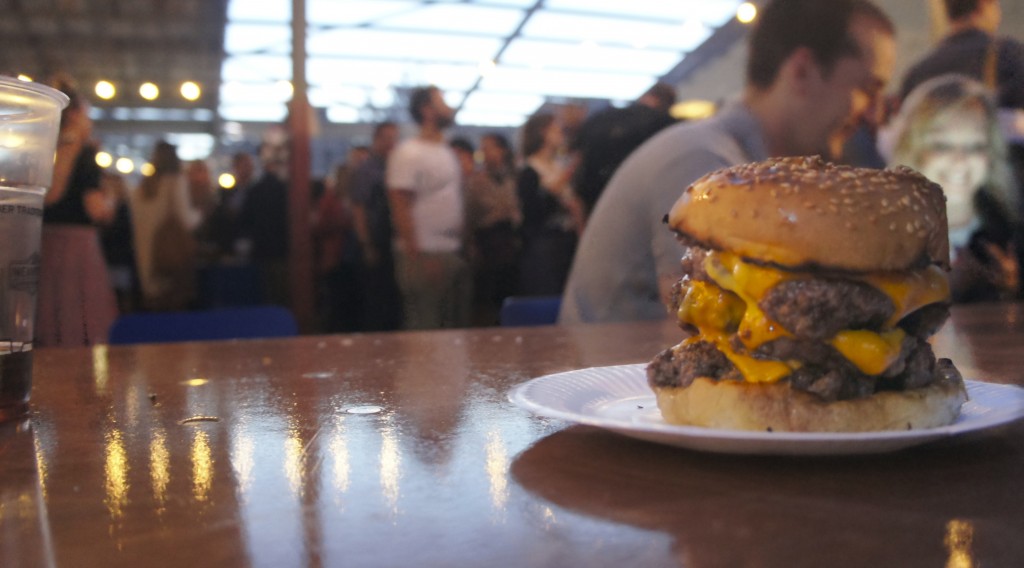 On the first bite, all my predictions appeared to be true. This was indeed an epic burger! The thing I love about Bleecker is that they keep it so simple. The patty is thick and coarse and perfectly seasoned with so much flavour in every bite. The American cheese oozes out from every opening and is deliciously sticky and strong. At first I wasn’t sure about the raw onion but as I went on, it slowly revealed itself as an integral flavour that complimented the intensely beefy patty. 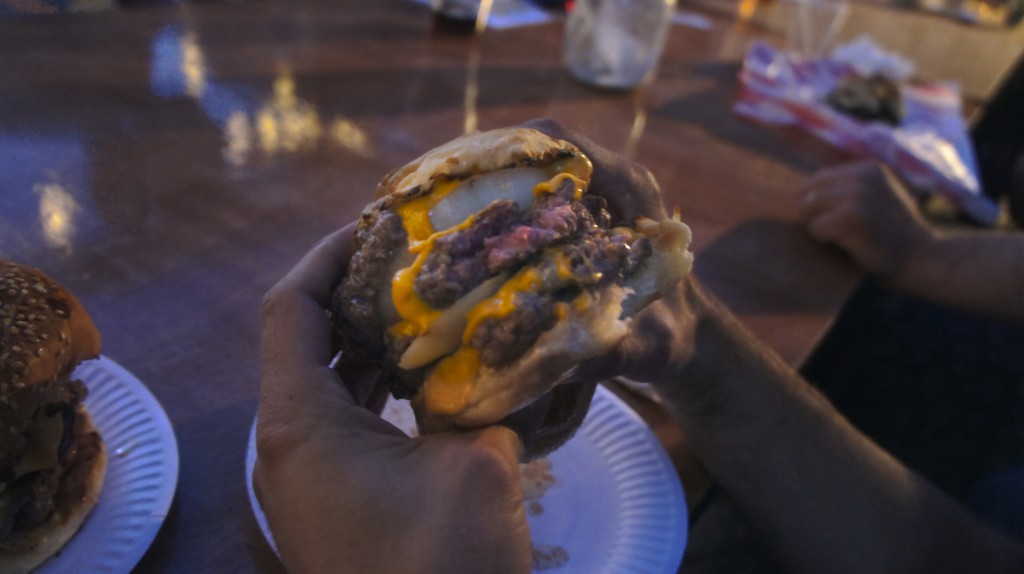 The triple went down well and I was sad when the final bite arrived. It was probably a blessing in disguise though as I was well and truly stuffed. I had fallen woefully short of the coveted 10, although I did actually plan to cut out MEATLiquor and Disco Bistro, but still, 3 from 8! I should have done a lot more sharing and not tackled the Triple Cheese by myself I think. Regardless of my efforts, the burgers I did sample were all of an exceptionally high standard!

As well as burgers being sold there were also some amazing looking options for dessert. The guys from The Crumbery had created some amazing burger themed Macarons! The Classic Burger consisted of a Chocolate Rice Pudding filling with a slice of Mango Jelly, acting as the American cheese slice. There were also The Turkish Delight Burgers and The Frenchie Burger! 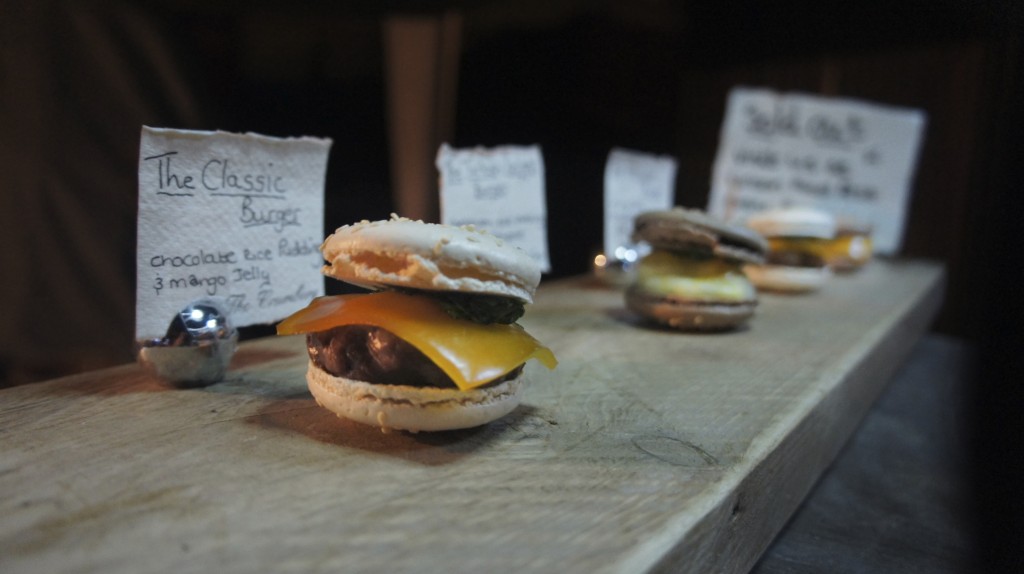 Sorbitium kept the burger theme going with a brand new and original burger flavoured ice cream concept! The press were going wild for this in the run up to the event and it seemed to be going down well with the punters! 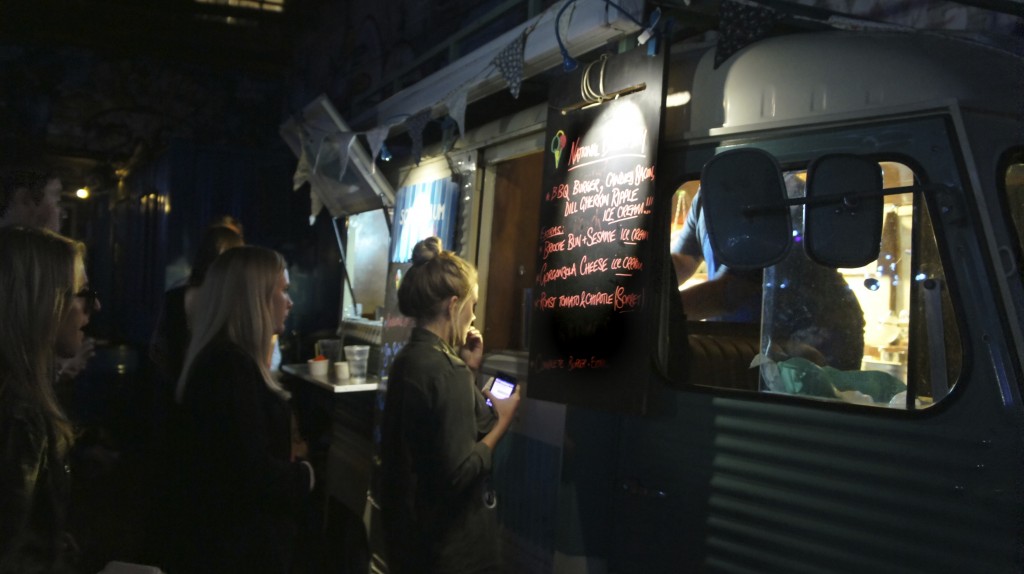 Chillibacks were still being necked at a rate. 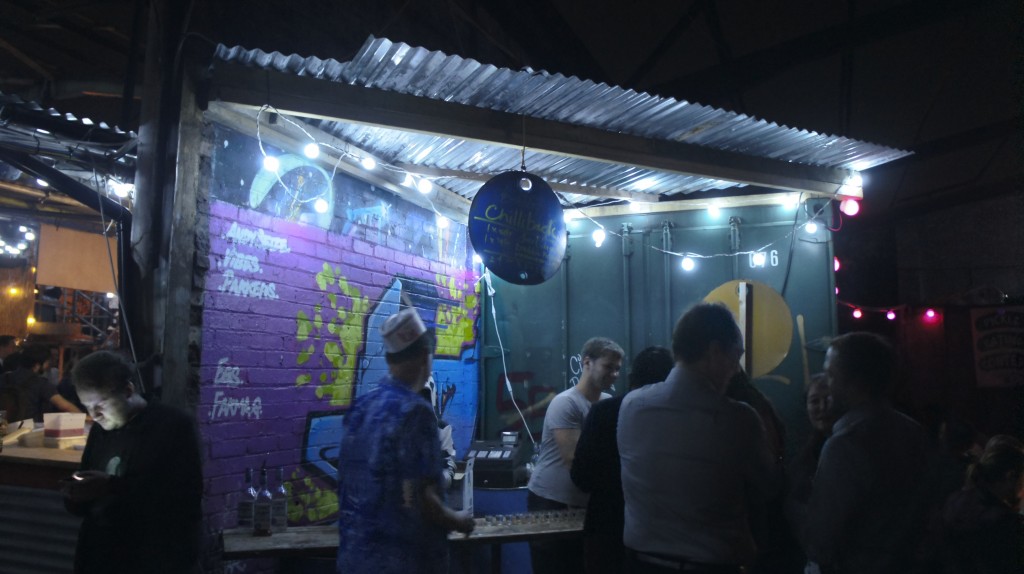 And as the night drew to a close, the crowds died down a little but the fun didn’t stop. Mr Hyde still had one more trick in store for the remaining burger fanatics! 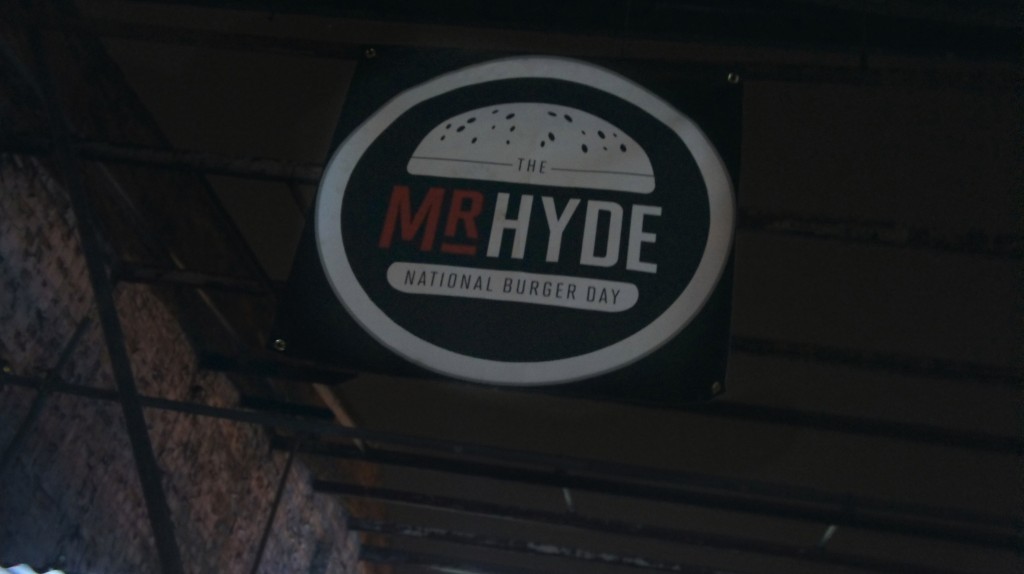 The final part of the night saw a giant burger piñata being suspended from some of the scaffolding in the yard and people being picked at random to try their best to crack it open and release the goodies from inside! Contestants were blindfolded and spun around in circles to disorientate them. Then they were handed a giant stick and left to their own devices. The crowd laughed and jeered as they swung aimlessly, some of the attempts were actually hilarious! Some even turned and started walking towards us readying themselves for a huge swing. This was met with a loud chorus of “NOOO!” from the people at the front, flinching, readying themselves for a smack. I think one girl actually got clobbered! After numerous failed attempts the piñata was finally knocked to the ground and the burger was split open, sending mini gummy burgers and Haribo flying everywhere! Queue the mass panic on the floor! I managed to come away with a healthy stash and we darted for the exit soon after, before anyone mugged us of our loot!

The success of a party can be measured by the amount of people not wanting it to end. The amount of tweets that were crying out for a National Burger Weekend or even Week after Tuesday night, proved that Mr Hyde and Tweat Up had well and truly nailed it, with a huge huge nod to all of the staff and kitchens involved too. The only downside of the night was the realisation that this was an annual event not a weekly one and we had to wait 364 days till the next one! I’m sure Tweat Up will think of a way around it though and have us consuming more meaty goodness in the very near future! And let’s not forget that Street Feast still have their summer closing party at the Dalston Yard to come too in the not so distant future!

If you didn’t manage to make it to the party this time, definitely get yourself first in line for the next one! These types of events are my favourite as you know something special is going to go down! I’m sure I will be seeing you all at the next one!