Following the explosion of Kimchi onto our shores with a bang, it seems that there is now another Asian invasion on the horizon. Last week I had the good fortune of being invited to the soft launch of a new installment at Bedroom Bar in Shoreditch, going by the name of Jubo. Jubo, translating to canteen, is a Korean-inspired restaurant that specialises in Korean Fried Chicken, taking inspiration from K-Town in New York and Seoul in South Korea. The concept? They’ve created their very own version of Korea’s ‘Anju’ (drinking food) and brought it to the heart of the East End. After hearing such good things about Gizzi Erskine‘s Korean Fried Chicken at her K-Town pop-up a couple of weeks back, I was more than happy to head on down and tuck in to this new import. 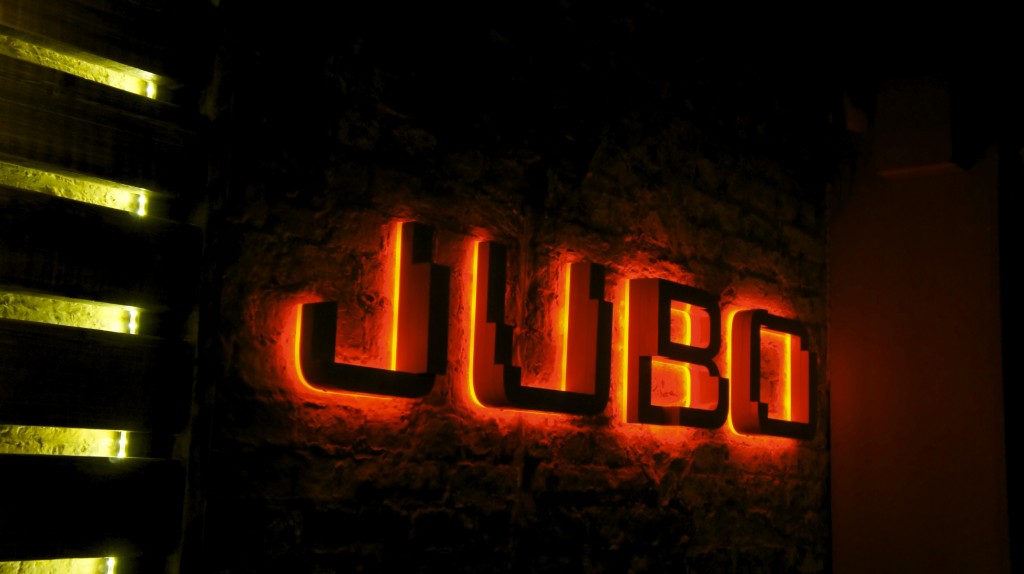 As you enter Jubo you are confronted with a stripped back enclosure nestled at the rear of Bedroom Bar. Neon lights provide the ambiance, bathing the punters in a soft fluorescent glow as they dine at banquet style tables. The atmosphere is buzzing with excitement and intrigue as the menu is analysed and discussed. 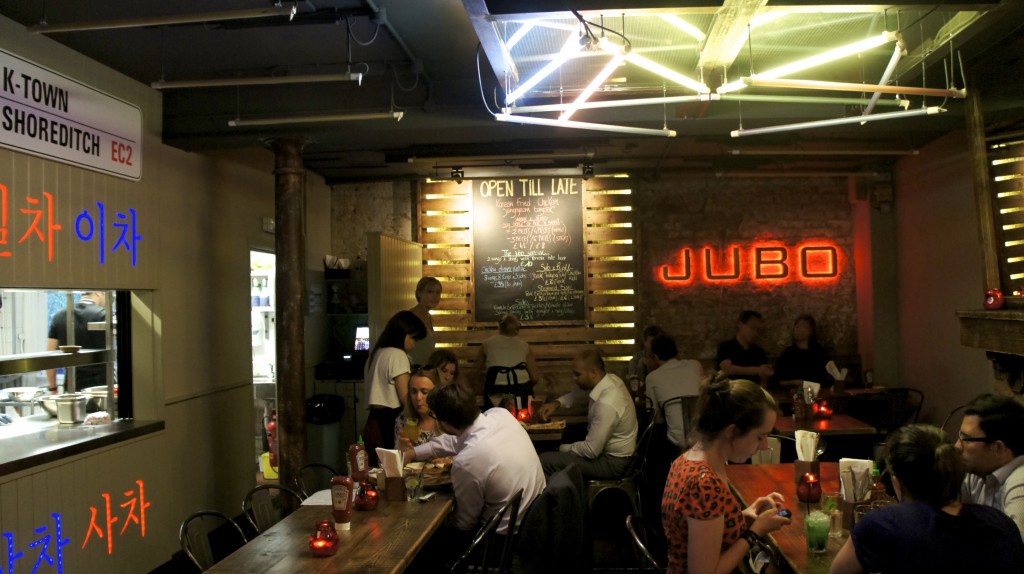 The menu fits the Anju description perfectly with a neat list of food that sounds like the perfect grub to marry with a pint of the good stuff. My tipple of choice for the night was a sweet pint of Symond’s Cider from the Bedroom Bar and my dining partner opted for a bottle of Hite; a Korean beer that Jubo had picked to help you wash your chow down with.

Sadly for us, by the time we had arrived they had already ran out of the Steak ‘ Bulgogi’ sub and the Brisket and Portobello Steamed Buns! Obviously people couldn’t get enough and were filling their boots before the launch date in anticipation of the queues soon to be stretching round the block. 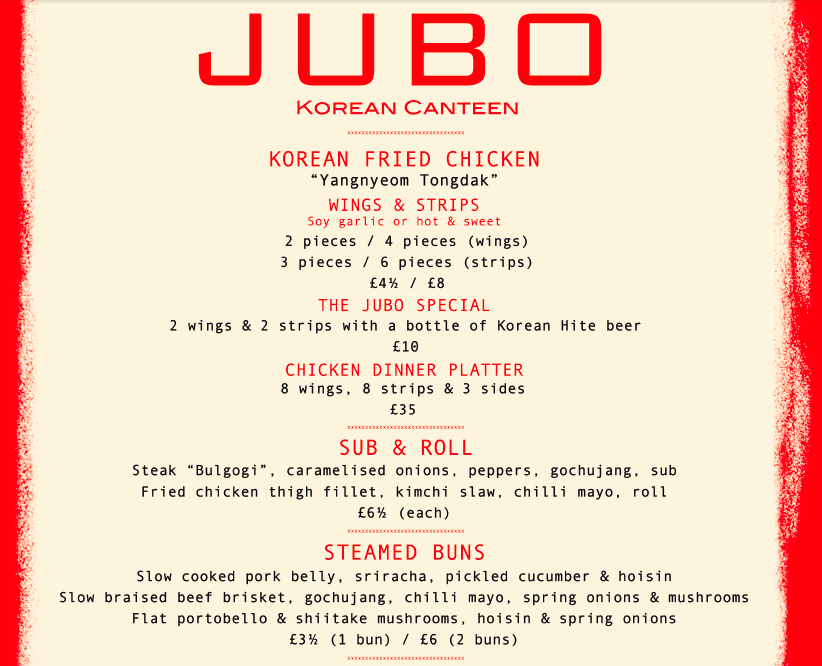 The noted absences from the menu didn’t play havoc with our selections though. We were here for one thing and one thing only. Chicken! Fried twice and covered in a delicious syrupy glaze, it arrived with a side of kimchi and fries and we also snuck a Fried Chicken Thigh Roll in there for good measure. The chicken strips came in two different flavours; soy-garlic glaze or a sweet Korean hot sauce; naturally we indulged in both. 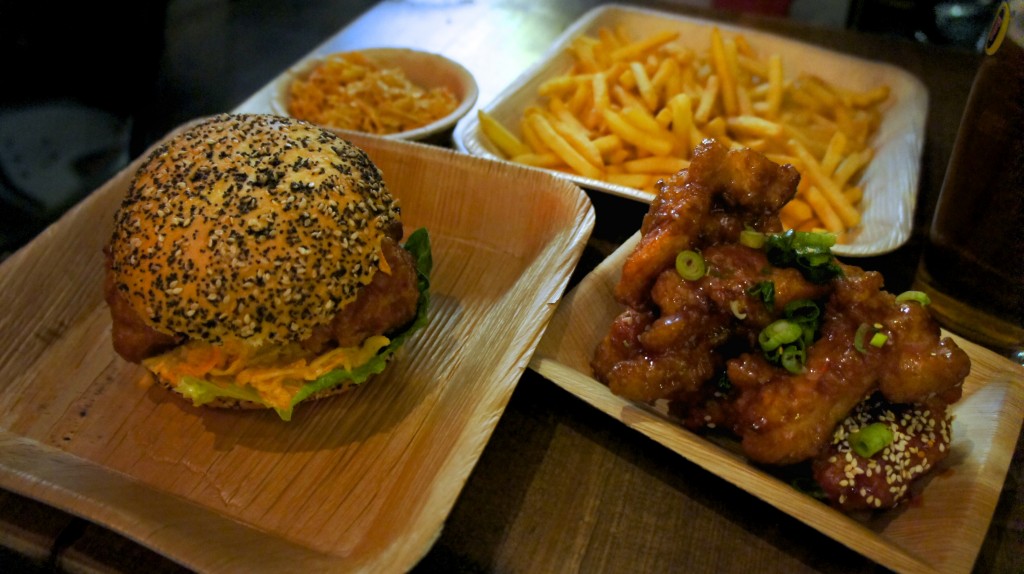 Now I don’t usually get excited about chicken in the same way I get excited about , say, a burger. However, recently I’ve enjoyed the delicious Blazing Saddle of Chooks in Muswell Hill and now the guys at Jubo have created this incredible Korean Fried Chicken (KFC). It seems that chicken is starting to fight back and I think this KFC trend could be here to stay. The soy-garlic glaze was delicious but I think for me, the hot sauce came through as the victor. An incredibly satisfying crunch greets you as you take your first mouthful, followed by a sweet sticky sauce that gives way to a perfect amount of palate warming heat! Made even better with a generous dunk in the chili mayo provided. So good were the strips that they were gone in an instance and we were left wishing we’d ordered another stack. 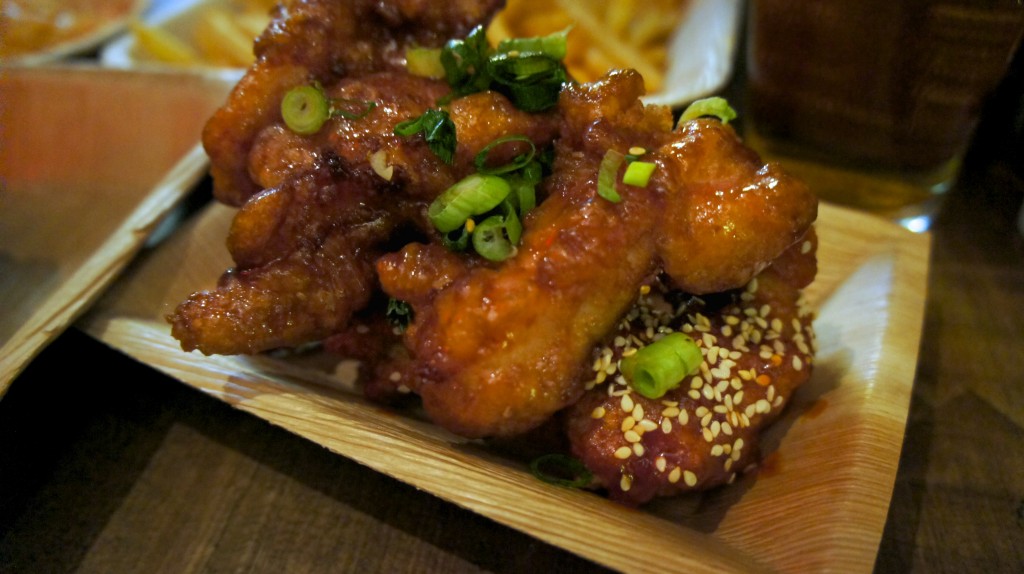 Luckily we still had the Fried Chicken Thigh Fillet Roll to entertain our senses. It was quite the beast! The chicken thigh fillet sat high on a bed of kimchi slaw, chilli mayo and lettuce, wrapped up in a poppy and sesame seed bun. Personally I would have favoured a brioche bun but I’m not quite sure whether it would fit with the Korean theme.

Split down the middle you can see the kimchi slaw and chilli mayo combo spilling out on to the plate. It was obvious that this was going to be a messy one! The chicken thigh resembled the KFC but wasn’t quite as crispy and after a couple of mouthfuls my predictions were correct and I had kimchi slaw all over my hands. On reflection, I felt the bun was a tad on the dry side for my liking. However, the ingredients within, definitely made up for it and cemented its inclusion on the menu. 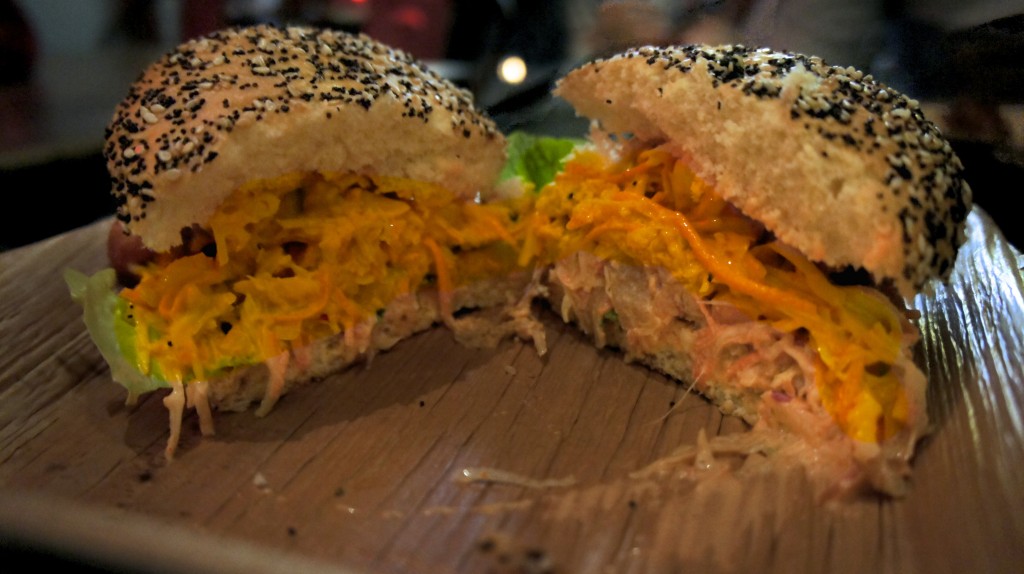 I think that Jubo is certain to be a success. It has placed itself at the heart of Shoreditch, surrounded by a number of top watering holes, such as Callooh Callay and Barrio East and from what I’ve seen of the food, it is guaranteed to go down well with the night owls! I know for a fact that I will be returning soon to sample the rest of the menu and to get another batch of that incredible crispy fried chicken. 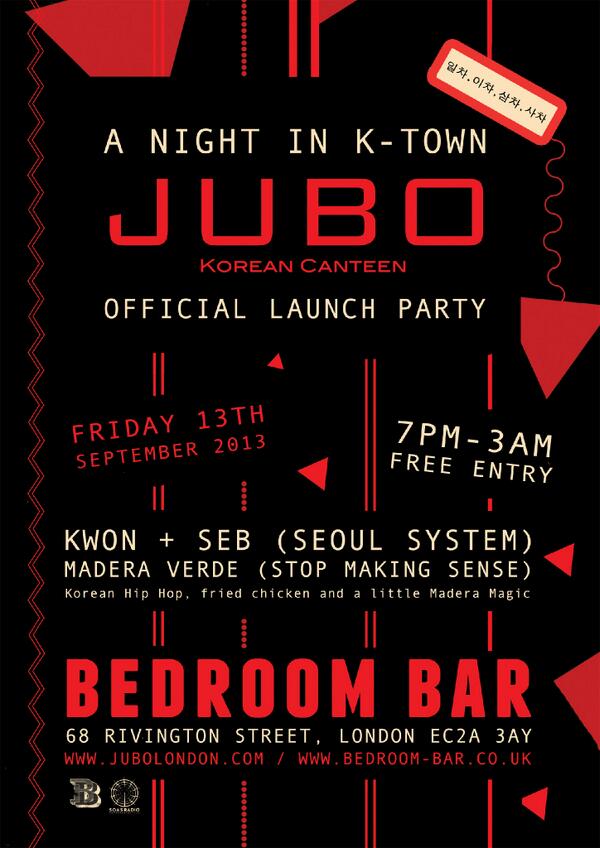 K-Town Shoreditch is open for business right now whilst still in soft launch status. If you fancy grabbing a slice of the action before the masses descend, I would head down as soon as possible. Even better, why not join them for their launch party this Friday from 7pm – 3am! Hwanho! (Cheers…I think)