The House Of Peroni has once again set up shop in our nation’s capital and brought with it a fabulous mixture of Italian Fashion, Film, Food & Drink. Their launch party last Monday evening saw a whole host of foodies and fashionistas treated to Peroni cocktails and Michelin star canapes from the Costardi Brother’s house menu. All set to the backdrop of a grand townhouse located on Portland Place and a soundtrack that kept  the party flowing well into the night!

Skip forward to Saturday and The House Of Peroni was playing host to a completely different event but one that demanded just as much attention and intrigue. I had been invited to join a few lucky diners who had managed to secure tickets to the first Italian Supper Club of the month. However, with the menu being kept close to the chef’s chests, what exactly we would be sampling was a complete mystery.

On entering the townhouse I was greeted with The Lonely Tenor. No not a friendless opera singer, this was a Peroni cocktail created especially for The House Of Peroni. Inspired by his love of The Three Tenors, Gerry Calabrese created a unique blend of Basil Leaves, Peroni Chai Tea Syrup, Lime Juice, Tequila, Green Tabasco & Peroni. It sounds unusual but believe me when I say, it was really refreshing and very smooth. I managed to sip a fair few of these at the launch and was more than willing to indulge in another. 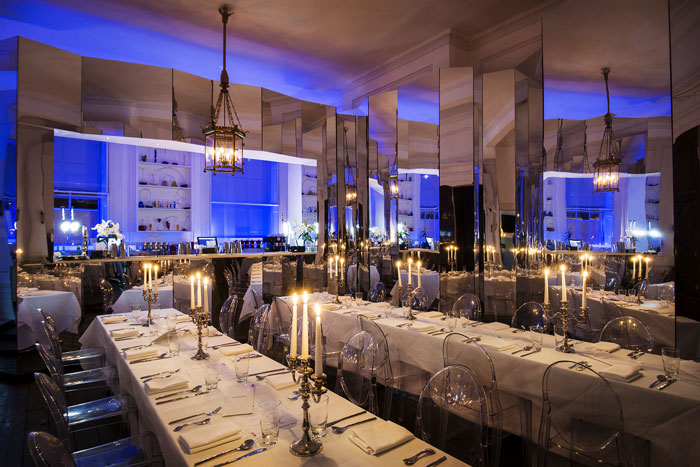 Guests were seated at long banqueting tables to encourage discussion and debate about the food we were about to enjoy. I was lucky enough to join a table of passionate and friendly foodies that were the perfect company for the evening. The best thing about meeting them was not only the jollity that ensued but also the long list of places they all recommended for me to try! It seems that even though almost a year has passed, I am still yet to cover even a small percentage of the amazing establishments that London has to offer. 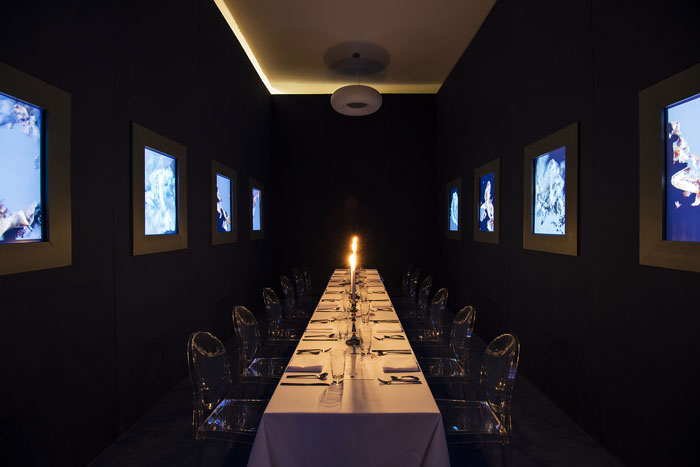 The Supper Club menu consisted of four courses, Antipasto, Primo, Secondo and Dolce. As I said before, it had all been kept a close guarded secret but when we finally took our seats we were greeted with a full menu for us to scrutinise. Each plate featured two different variations of the same dishes. The concept behind the menu was that we would be taken on an adventure through Italian cuisine, visiting original dishes from the 1960s and then a contemporary interpretation of that same dish.

The wonderful soft, creamy and oozing middle of the burata cheese is famous across Italy. Our rather unusual and innovative take on this popular gem combines elements from across the South of Italy and includes ‘nduja, a spicy Calabrian salami flavoured with chill as well as smoked herring eggs.

May I first apologise for the pictures that follow. I broke one of the most important rules in food blogging and idiotically forgot to put my battery in my camera, so I had to switch to my iPhone. Hopefully they will suffice. But back to the food!

The Antipasto was an excllent way to start. The great thing about the original dish was the simplicity of the ingredients. The burrata was obviously the main event here though. I’ve not had the pleasure of trying burrata before but it is certainly on my radar now! As described, it had an oozing centre that was smooth and creamy and worked perfectly with the sweetness of the baby tomatoes and the peppery rocket. The contemporary variation definitely one my vote though. The three individual mouthful sized mounds were delicately created and were packed with an incredible amount of flavour. The combination of salt and spice from the ‘nduja sausage and the smoked herring eggs complimented the creamy burrata and made for a faultless dish. 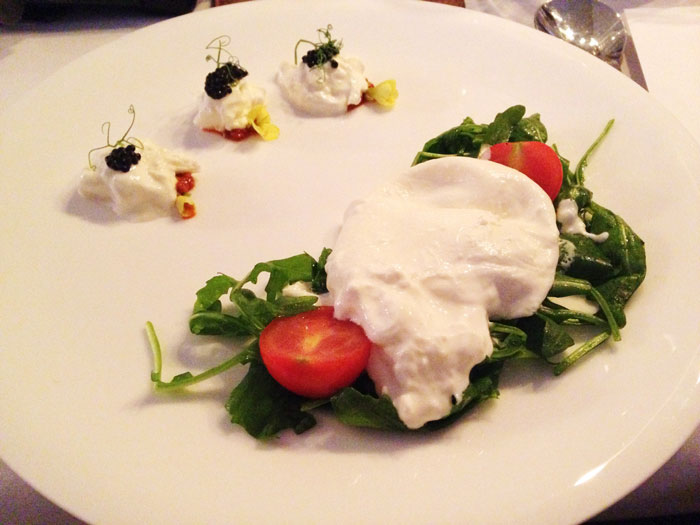 The traditional Roman dish, blending strong mountain cheese with the exotic contrast of black pepper is the perfect encapsulation of beautiful ancient Rome. The modern reinterpretation adds an unexpected twist and provides the embodiment of Italy’s beating heart.

The second course was a tale of two spaghettis. The original dish was extremely simple, creating most of its flavour using a very healthy dose of black pepper. The contemporary dish however, was slightly more complex. The black pepper was less prominent as the mix of three different herbs created most of the flavour here. Razor Clams and Pecorino had also been introduced to really set these two dishes apart. But when it was all said and done, I think that I actually prepared the original dish just that little bit more. 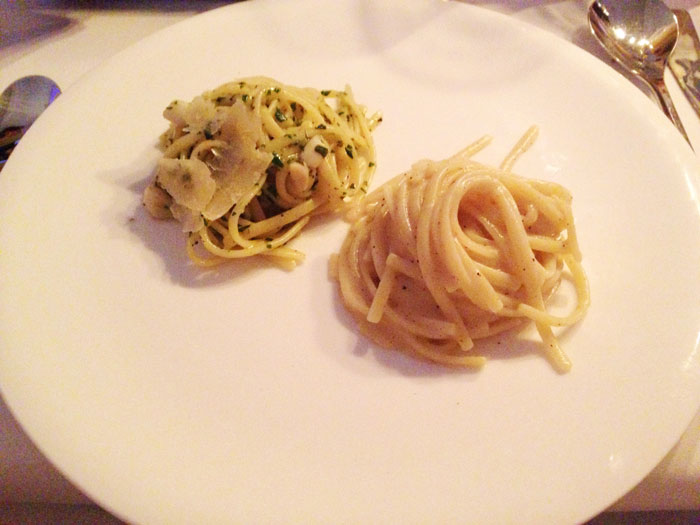 Back in the sixties fish restaurants in Mondello used to serve the Rana Pescatrice alla Siciliana simply cooking it with capers, anchovies and black olives. The contemporary version of the Rana Pescatrice is wrapped in Parma ham and is accompanied with quinoa, chickpeas puree and dashi.

This third course was a real treat. If I am honest, I was slightly confused by the description but when I found that the fish being used was in fact monkfish, I was pleasantly surprised. I am a huge lover of monkfish and couldn’t wait to tuck in. The original dish again demonstrated a great deal of skill in sourcing simple ingredients to produce big bold flavours but my hat goes off to the chef’s for the contemporary dish. The Parma ham wrapped monkfish was exquisite, with the quinoa and chickpea puree adding texture and subtle flavourings. I would have loved to enjoyed a larger portion of this one, it really was quite delicious! 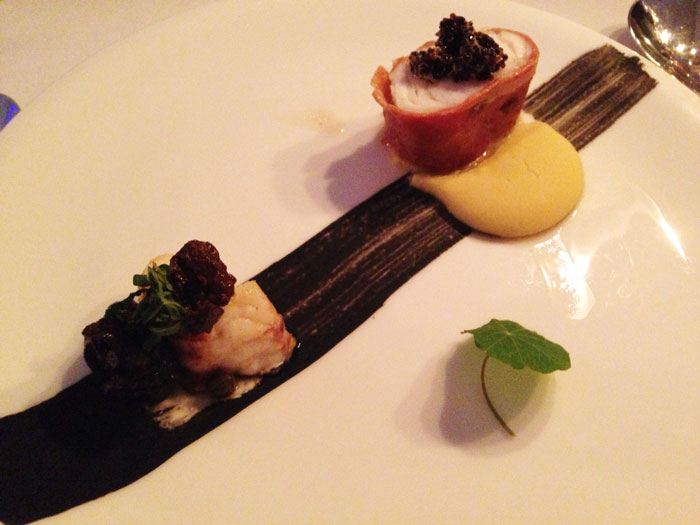 Polenta has been at the base of Venetian cuisine for centuries. It remains a staple to this day, which is why we have decided to present this wonderful cake, offering the innovative addition of saffron.

After a rich three courses, the polenta cake was a welcomed finale as it was light and refreshing. The two dishes were very different. The original was essentially a well executed lemon drizzle cake and the reinterpretation was more of a polenta flan that mimicked the flavour but not the texture of a crème caramel. Both equally delicious but for me the original won me over with it’s sharp citrus notes that cleansed the palate perfectly. 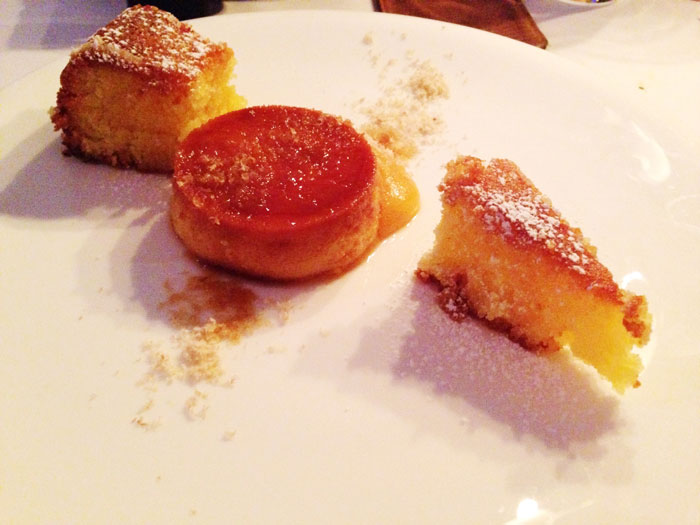 The House Of Peroni’s Italian Supper Club was one of my favourite food experiences that I’ve had for a while now. The thing I love about a supper club is that the atmosphere and environment promotes thought provoking discussions, humorous anecdotes and interesting encounters. The House Of Peroni was the perfect environment for just this and the unique concept that the Italian Supper Club has created for it’s diners, definitely delivered when it came to debate and discussion. I couldn’t have asked for better company than the dinner guests I met and the real treat for us all was the unique and original dishes that we were served. If you are lucky enough to be joining the Italian Supper Club I hope you enjoy yourself as much as I did. If you are not attending then have no fear as both The Costardi Brother’s Michelin starred house menu and Street Feast’s Friday Street Market are both well worth heading down to the house for! So do not delay as The House is only open for business during November.