A couple of weeks ago I was lucky enough to be invited to a special Tasting Panel at Fire & Stone, situated in the heart of Covent Garden. If you aren’t aware of Fire & Stone already, they pride themselves on the their handmade pizzas with world inspired flavours. Each pizza is named after a major city in the world topped with ingredients that reflect the country and culture the city resides in.

The idea of the night was to meet with some fabulous foodies and talk pizza. Not just any pizzas though. We were here to try six of Fire & Stone’s old classic pizzas that had been taken off the menu and then we had to choose our top two that we thought were worthy of a fully fledged renewal. After a warm welcome from the lovely ladies organising the event, we wet our whistles and delved into some tasty starters. 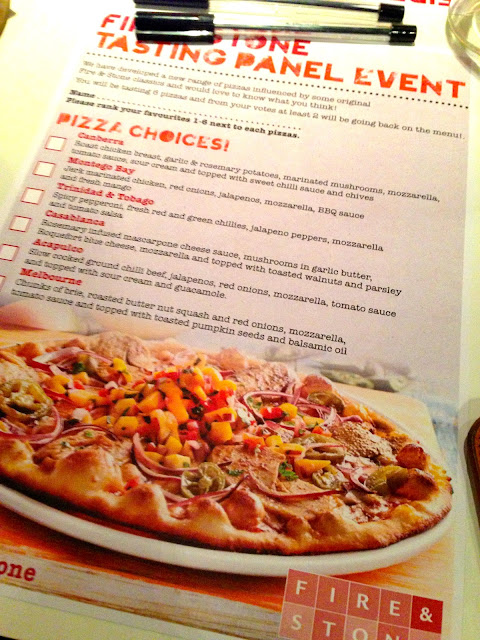 Once we’d had a chance to introduce ourselves and meet the other bloggers, we were greeted with our menu for the evening. It revealed the six different pizzas that had made it to the short list for our inspection. We were instructed to take notes and savour the flavours as we were going to be ranking them in order of delectability!

The first out of the oven was the Canberra, which I must add is an old favourite of mine and I was delighted to see it potentially returning to the menu. However I tried to keep an unbiased view so I could focus on which two of the six were most worthy of reinstatement.

This was just as I remembered! Although it’s a fairly unusual topping, I love the addition of rosemary potatoes on this pizza. They worked perfectly with the roasted chicken and you can never go wrong with a big dollop of sour cream and sweet chilli sauce. This was quickly noted down as one to beat! 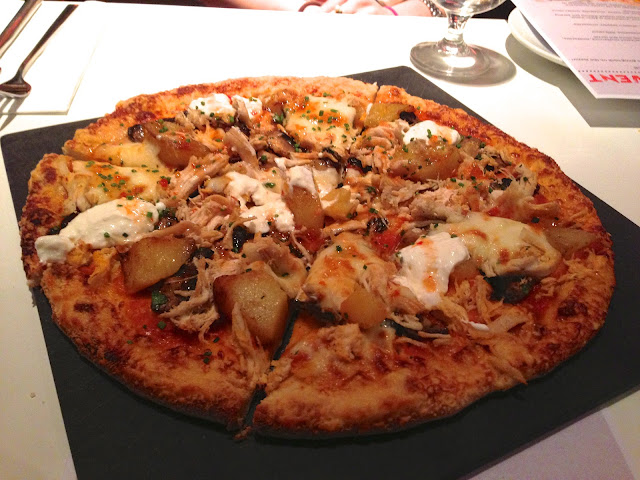 After everyone had finished scribbling down their notes, the next to be plated up was the Montego Bay. A colourful looking pizza that promised to pack a punch of spice.

Again this pizza offered an original mix of ingredients that created a really flavoursome bite. The jerk chicken and jalapeños worked together to create a spicy concoction, accompanied by a tangy mango relish and a smokey BBQ base. The challenge was proving harder than I first envisaged as I’d only had two pizzas and they were both superb! 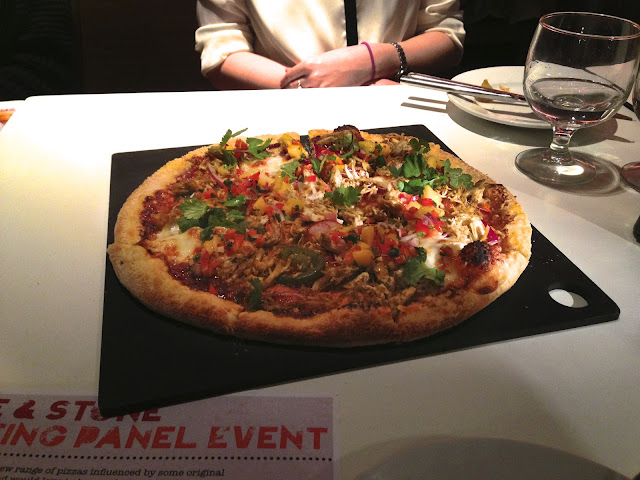 If I thought the Montego Bay was spicy, I had another thing coming. Next up was the Trinidad & Tobago and this proved to be a celebration of all things hot, perfect for the spice fans!

As expected this lit up the palate as soon as it touched down. Now don’t get me wrong, I like a bit of heat but if I’m going to go for a pizza in a restaurant I usually choose something that boasts a big dollop of flavour rather than an overwhelming sense of warmth. If we had been anywhere else I am sure this would be a signature pizza but I just thought that this didn’t match up with the calibre of the first two,  although I am sure lovers of spice would have disagreed. 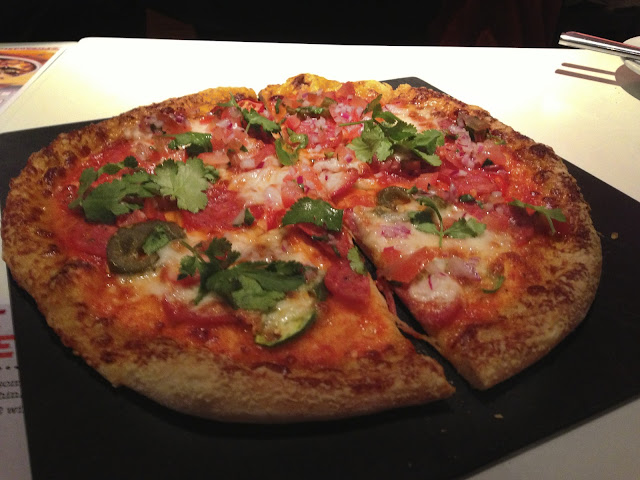 The fourth pizza on the menu was the Casablanca and this boasted a large list of ingredients, the main one being cheese! However, it was a vegetarian option, so it was going to take a lot to impress me as I am a huge carnivore and usually require a huge injection of meat on my pizzas!

Surprisingly, this went down really well with me! The roquefort worked well with the mushrooms and the rosemary infused mascarpone was a brilliant addition. I might have swapped the walnuts for maybe caramelised onions or possibly a fig chutney though just to add a bit of sweetness to cut through the richness of the cheeses. 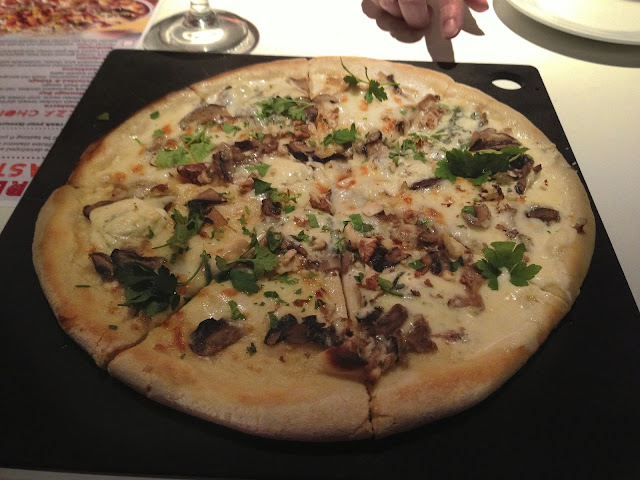 The penultimate pizza was the Acapulco. This was a delicious collection of ingredients created with Mexican inspirations. The belt was getting a little tight but after looking at the ingredients I was more than ready to tackle this one.

The ingredients made me think of delicious Mexican tacos that I had whilst in San Diego and it was literally like having them all sprinkled over a delicious pizza base. The ground chilli beef was incredible and I ended up plastering a bit of everything all on to one piece to get the full experience. 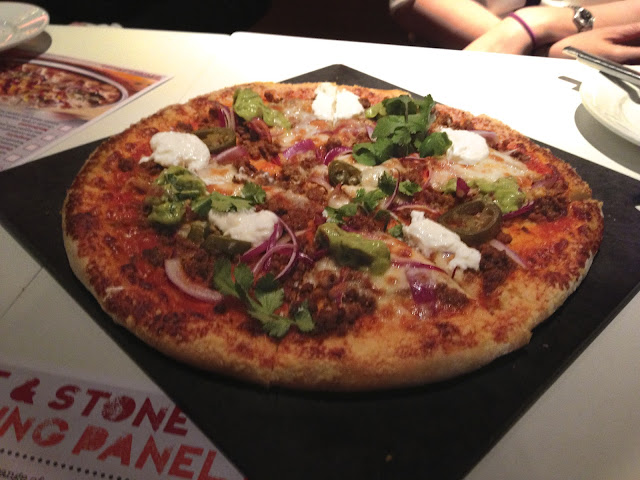 The final feature in the list of pizzas was the Melbourne, another toast to Australia and once again a great list of ingredients to behold.

This was a fine dish to finish on indeed. The melted chunks of brie were rich and creamy and the balsamic oil was a welcomed accompaniment. The roasted butternut squash was cooked to perfection, nice and soft but retaining it’s shape. This stood out as one of the best of the night and had a big chance of sealing a top two place. It was going to be a difficult decision indeed! 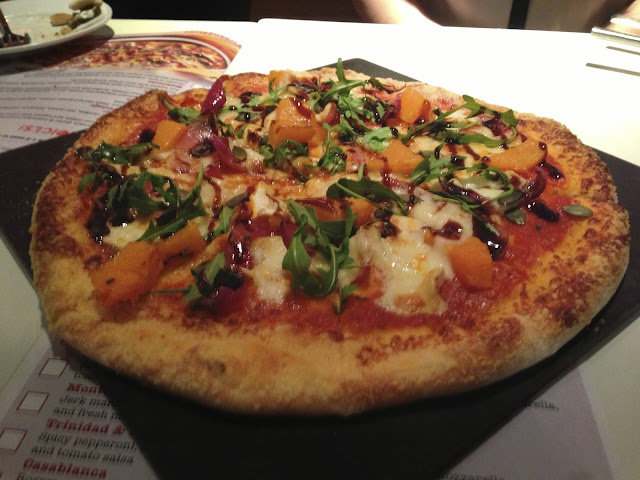 We took our time reading through our notes and deliberating over our top six rankings. The voting was all done in secret though and the results were to be announced the next day. Whilst we were finishing up I managed to sneak a little pudding in before the journey home. I noticed the Fire & Stone Cookie Sandwich, which used Marshfield Ice Cream, a producer from the good old Cotswolds! I went for their Honeycomb ice cream sandwiched between two soft cookies. The result was a beautifully presented tower of decadence that tasted exquisite from start to finish. 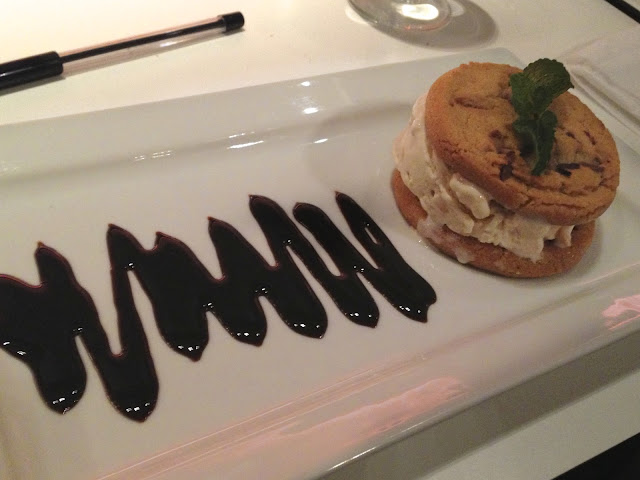 The next day, results were in and to my delight, after choosing the Canberra and Montego Bay (narrowly beating the Melbourne) as my top two, I was happy to see that the Canberra had made the final top two. It was joined, to my surprise, by the Trinidad & Tobago, the others must have really enjoyed the spice.

It was a great night of fantastic feasting and foodie discussions with a great crowd of enthusiasts and I extend my thanks to Fire & Stone for including me in the panel. I hope that all the regular customers were happy with our work and that the two pizzas will do well back on the main menu. If you haven’t been to Fire & Stone you should definitely head down there soon and check out the pizzas for yourself. Take my advice and go for the Canberra, you won’t be disapointed! Also check out some of the blogs from some of the great foodies I met!