It’s been a busy week and I feel like I haven’t sat down with the blog for a while! Lots of things have been going on, including some major updates for the blog! I’ve finally managed to grab some free time though and I find myself writing this on a Friday morning on platform 4 of London Bridge, awaiting my train to the golf course! Who needs a desk!

Today’s post is about a little place I found on my first trip to Muswell Hill after having just moved down the road a month ago. If you’ve got Aussie friends or have been lucky enough to travel to Australia then you may have heard the word Chooks before. If not, then I’ll fill you in. It’s an Aussie slang word for chickens and that is exactly what Chooks specialises in! 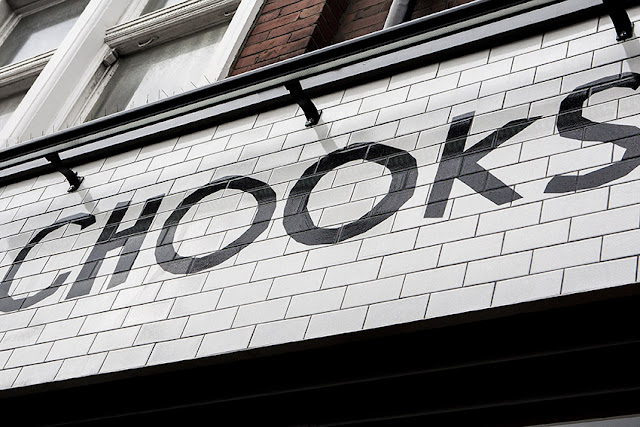 Their menu boasts a great selection of all things poultry and even squeezes in a healthy dose of delectable dishes from the swine family tree. This all sounded too good to be true after returning from a week on the Croatian coast, feasting on a diet of over-sized slices of pizza and far too many Magnums. My body was definitely overdue something meaty, juicy and most importantly, loaded with a full on indulgence factor and this was the perfect place! 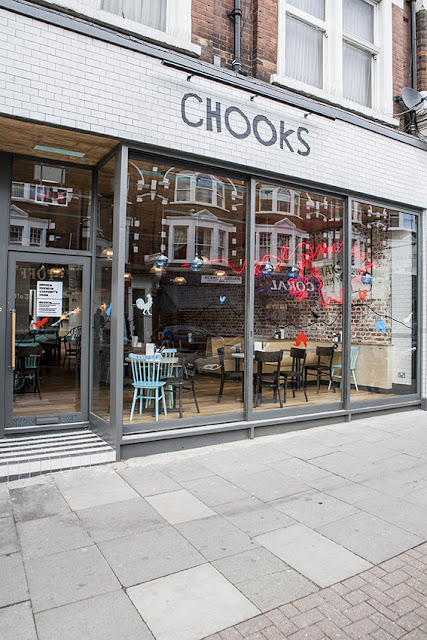 With it’s bare brick and shappy/industrial chic furnishings, the inside of Chooks wouldn’t look out of place nestled in Hoxton Square. The atmosphere is relaxed and laid back, perfect for a sunny afternoon. 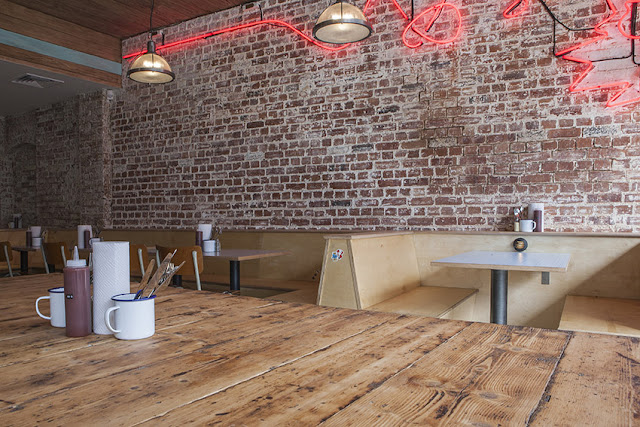 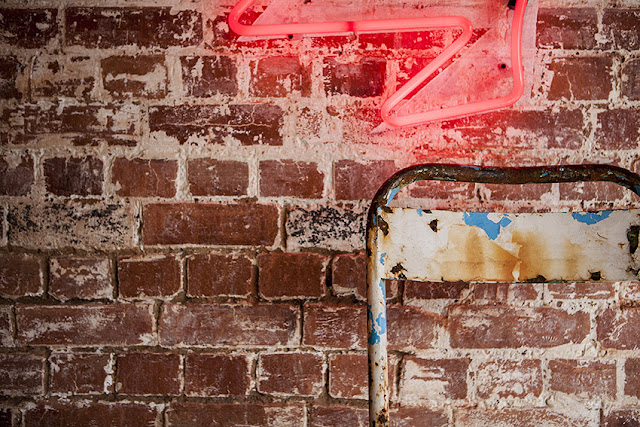 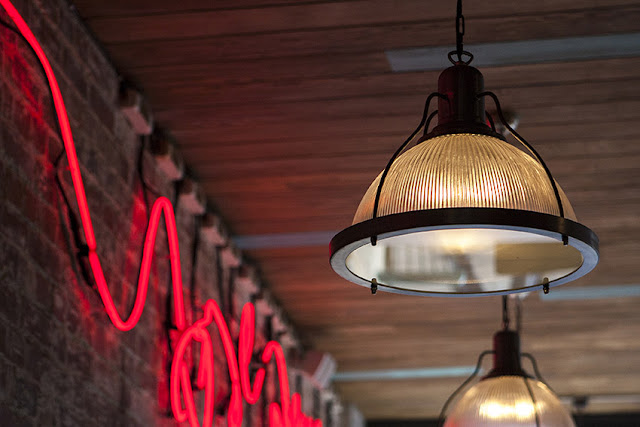 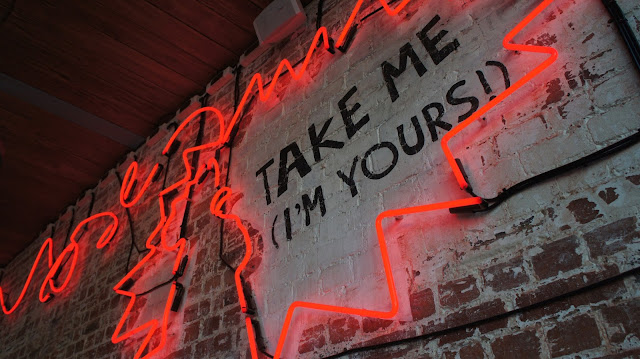 With so many tempting dishes to choose from, the menu made for difficult decision making. I was almost swayed by the rack of BBQ Spare Ribs or even the Fat Pig Burger! 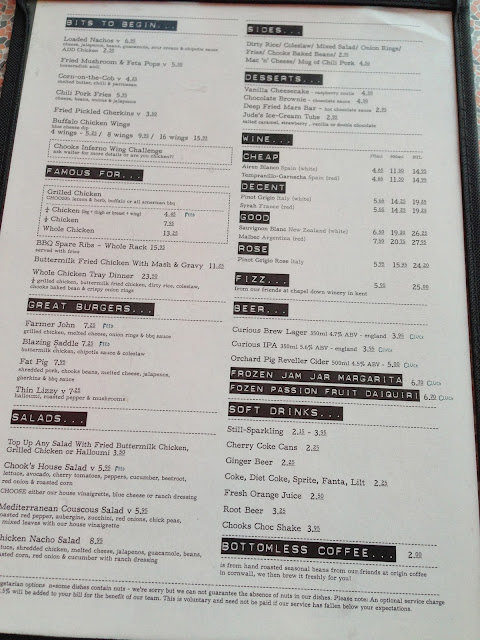 Turning down the option of pulled pork is a rare decision for me but the Blazing Saddle burger just couldn’t be ignored. If there are two things I love as a side for any meal of this nature it is any condiment that includes chipotle and a big spoonful of crisp and creamy coleslaw. So when I saw that the Blazing Saddled combined Chipotle Sauce with Coleslaw on top of a tower of Buttermilk Fried Chicken, it was obvious that this had been created especially for me! 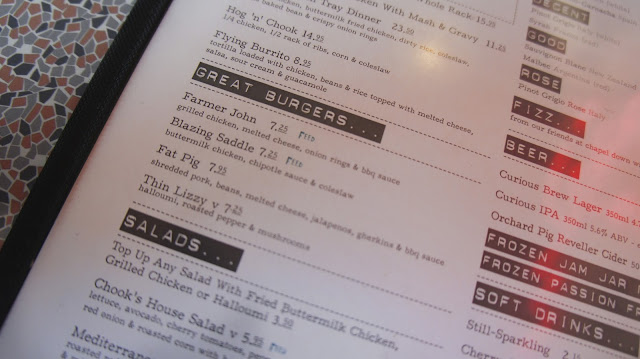 My friend opted for a Blazing Saddle too, just to make sure there was no opportunities for the dreaded food envy. We thought we’d sample their buffalo wings too and also added onion rings and some vanilla shakes to the bill.

The shakes were so good, I had finished mine before the food had even arrived. Thick and creamy like a proper US diner style shake, it was perfect. The only disappointment was that there wasn’t more of it! For some reason the big metal containers they come in weren’t full to the brim as usual. However, with that being said, I was happy to order myself a ginger beer next,  as I felt that it was probably a better suited beverage for the feast that I was about to enjoy.

We hit the buffalo wings first. They arrived coated in hot sauce and served with a blue cheese dip. The hot sauce was sharp and vinegary with a slow building heat. They reminded me of the much talked about Monkey Fingers the guys at Meat Mission serve. The blue cheese dip was a rich and cooling addition that demanded a wing be dunked in, naturally we obliged. 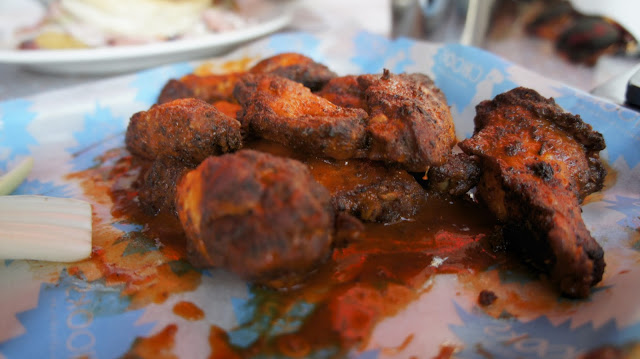 After polishing off the wings and wiping the orange sauce off our faces (they give you a roll of kitchen roll for a reason) we turned our attention to the two towers of buttermilk fried chicken sitting in front of us. They were stacked high and dripping in chipotle sauce and delicious coleslaw. The super soft brioche buns had been skewered in order to keep the stack stable, it was obvious these were going to be just as messy as the wings! 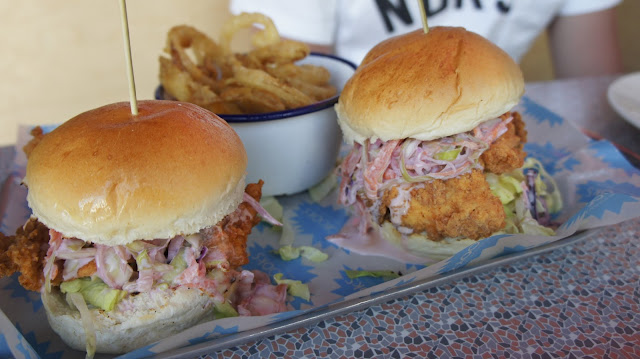 The Blazing Saddles were so good, I couldn’t put mine down. The chicken was seriously succulent and covered in an incredible batter. Thankfully there was a huge mound of it to get through but I think where this thing really succeeds is as I first thought, the combination of chipotle sauce and the refreshing coleslaw. The smoky chipotle sauce gives an incredible barbecue flavour to the burger and warms the palate nicely. The coleslaw on the other hand, is cool and crunchy, adding texture and that familiar creamy flavour that we all love. With a winning combination such as this, you’ll be left with a huge smile on your face and feeling fully satisfied. The only downer is that a couple days later you’ll be craving another one of these beasts! 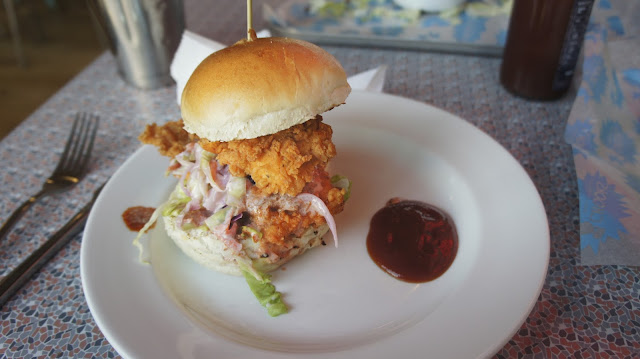 If this wasn’t enough to get your tastebuds tingling then the finale will grab your attention. I was having a quick glance at the list of desserts while the waitress removed our plates. Amongst the usual cheesecake and chocolate brownie I suddenly came across four words that almost made my eyes pop out  of my skull! Deep Fried Mars Bar! I have wanted to try one of these for ages out of pure curiosity. Turns out it is one of the most glorious and indulgent ways to finish a meal ever! Beneath the soft batter lies a molten core of Mars and the whole thing is topped off with a drizzling of chocolate sauce. If you haven’t tried one then this is the perfect place to do it! 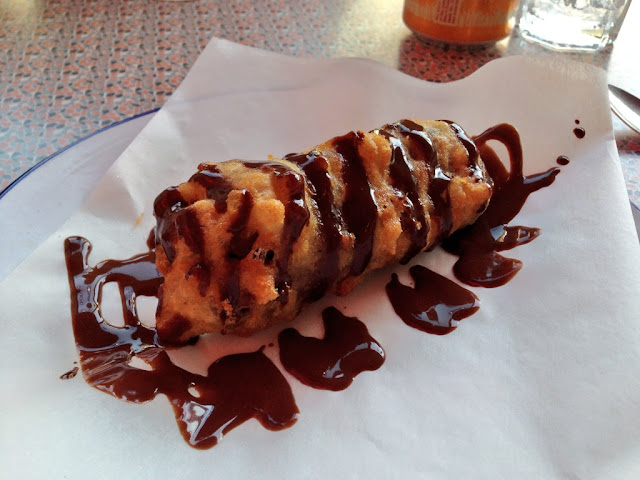 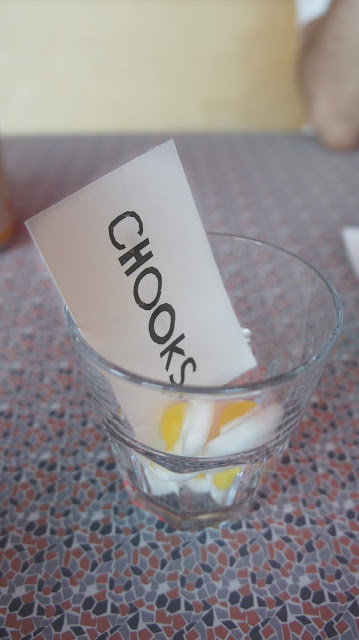 Well and truly stuffed we asked for the bill, which arrived accompanied by a glass of gummy fried eggs (nice touch). It was a great meal and the conclusion was unanimous. Chooks really hit the spot and I’ve been back twice again already. I can’t wait to get my hands on a Blazing Saddle for another time too. I’m also looking forward to exploring more of Muswell Hill and Crouch End soon. I’ve heard there’s quite a few interesting places that I need to check out!