This week my flatmates and I thought, having never tried haggis before in our lives, we should join in with Scotland’s annual celebration and throw our very own Burn’s Night. We didn’t really have any ideas about what usually goes on at these things but decided that we would make the evening as Scottish as possible! So off we trudged through the snow to Waitrose to collect a few things and most importantly, a couple of haggis! After a little research we realised that the traditional dish consists of haggish, mashed tatties (potatoes) and mashed neeps (swede). However I had a  sudden (and rare) brainwave, “why don’t we make haggis sliders?!” An idea that went down very well with the flatmates!

Fast forward a few days later and I am sat at my desk at work and yet another genius idea hits me, like a boot to a ball boy! Why don’t we go ahead and chuck some blooming cheese in the middle of them, better yet, make it Scottish cheese! Quick text to the clan and it was a go! I rushed across from Tower Hill to International Cheese which is perfectly placed right outside Liverpool Street tube station and asked if by any chance they sell Scottish cheeses. I was in luck, they had three! After a little taste of each I settled on the Isle Of Mull Cheddar. It was a light coloured cheese but strong with a slight tangy after taste that I thought would cut through the richness of the haggis perfectly. 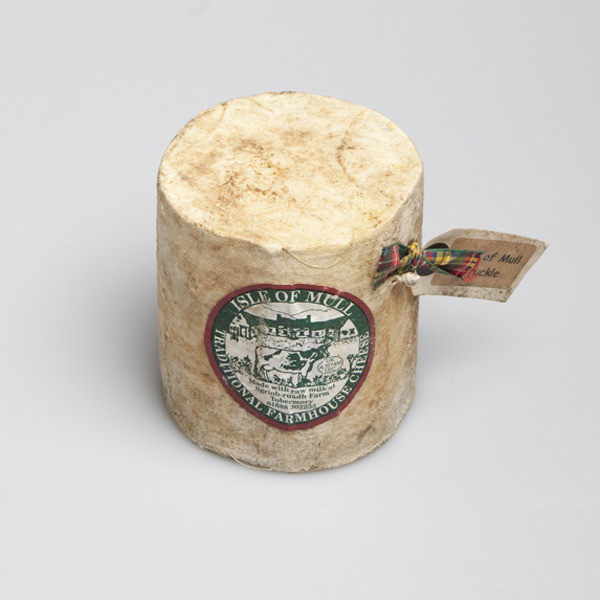 Now I am a bit of a perfectionist and if I’m going to do something like this I want it done properly. If there is one thing I’ve learnt over the last couple of months coming to London it’s that if you’re going to create a burger you’ve got to pack it into a brioche bun! Now for the life of me I don’t know why these aren’t available to the public because they are incredible. Maybe they are but it’s just a well kept secret? Anyway I took matters into my own hands and decided if no one wanted to sell me any, I was just going to bake my own batch!

The notorious delays on the Northern Line tried their hardest to keep me from the kitchen but I messaged through to the team telling them to have the ingredients ready for me to slice and dice as soon as I arrived. Shoes off, bag down, niceties spared, hands washed, knife in hand, haggis time! I took the two bulbous beasts and sliced right down the middle, emptying the contents into a big mixing bowl. 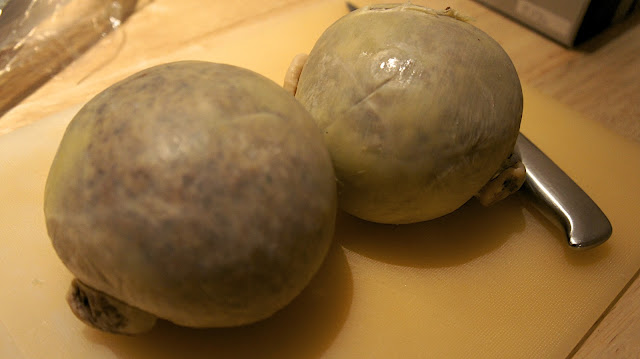 I took a large free range egg and cracked it into the bowl and proceeded to mix it all together. There was no need to add seasoning as this had already been applied to the haggis ingredients. The egg did it’s job and soon the mixture was binding together perfectly. There were 6 for dinner, so I made 12 half patties, with the intention of sandwiching some of our delicious Scottish cheddar in between two. Cue sous chef Emily with the cheddar prepped and ready for the final construction of these meaty beasts! 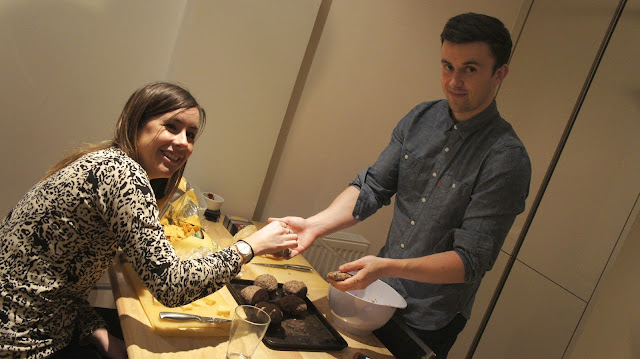 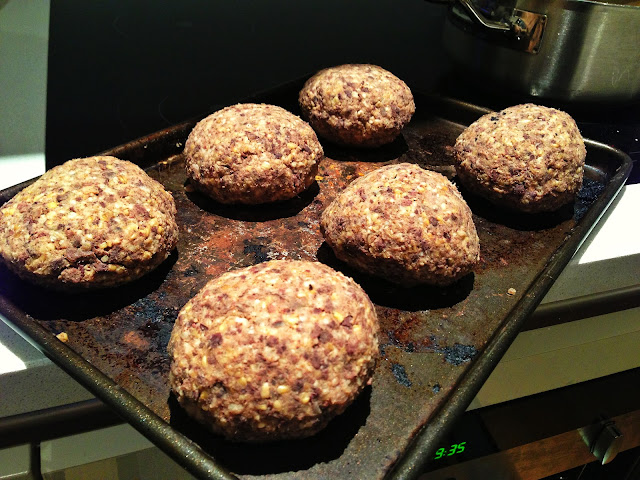 I washed my hands and started working on creating the brioche slider buns! All of a sudden the music was hijacked and the highland bagpipes had been replaced by Glasvegas and someone had cracked open the Irn Bru, some of Scotland’s finest exports if you ask me. As some of the flatmates weren’t huge fans of whiskey we decided the next best thing was whiskey liqueur. So in went a couple shots of Southern Comfort, which actually turned out to be a really tasty combination! 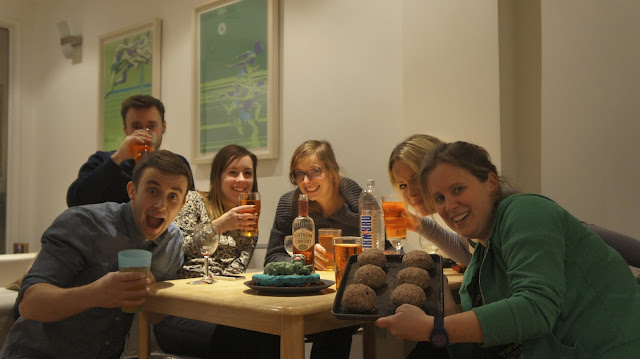 My focus then returned to the brioche buns. I added milk, custard powder, sugar and butter into a pan and mixed till boiling and then removed it and allowed it to cool till it was just warm. I then tossed in flour, dry yeast mix and a pinch of salt and proceeded to kneed the dough until it was smooth. 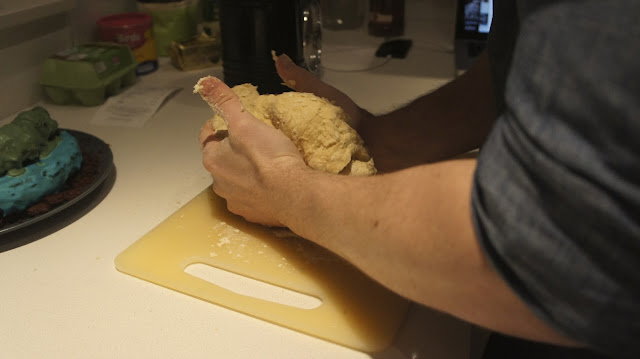 While the bread was left to proof we decided to get the starter under way. My sister had arrived with some gourmet Scotch Eggs and had decided to buy the ingredients needed to create a smokey chipotle mayo dipping sauce! Stomachs were definitely starting to groan now so she whipped it up quickly. The Scotch Eggs were grilled to reignite the flavour of the sausage meat and to get the breadcrumbs nice and crunchy. The home made chipotle mayonnaise was delicious with a smokey kick and once the eggs were finished there were definitely some fingers creeping in to the bowl for a sneaky taste! 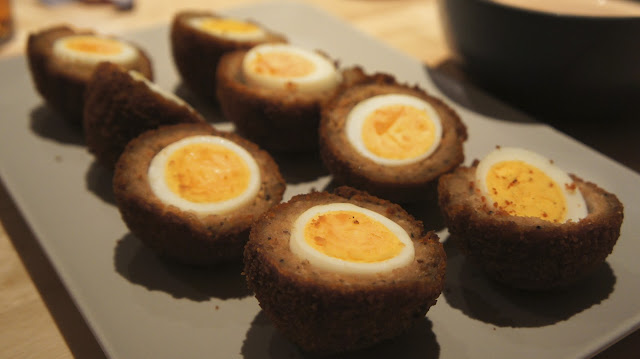 Whilst we were enjoying our starter I had put the haggis sliders into the oven and then added the brioche buns a little while after. The buns only needed 15 minutes as they were so small and once they came out it was important to cover them in cling film as it helps them retain that soft squishy shell that makes them so popular amongst burger folk. 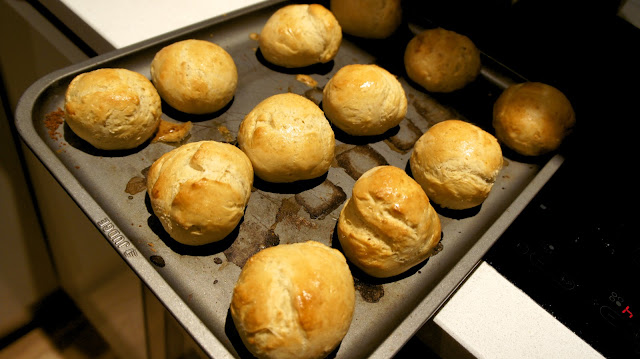 The haggis sliders came out of the oven oozing molten Scottish cheddar everywhere and smelling amazing! I quickly started building the sliders, realising that the buns may struggle to hold these monsters haha! Keeping a little tradition in the menu, we served the sliders with a small side of neeps and tatties and cracked open some wine as the Irn Bru had run dry! 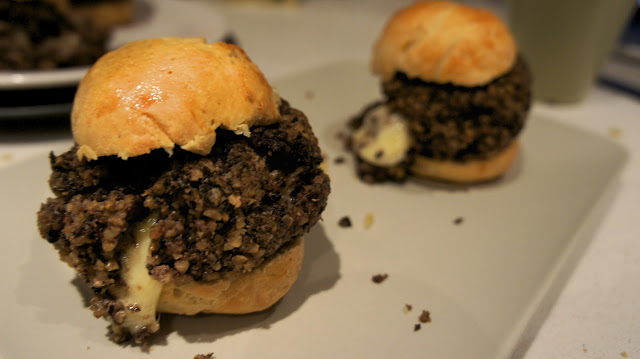 The sliders were an enormous success and literally one of my favourite ever recipes I’ve made myself! The haggis was perfectly seasoned, rich and combined perfectly with the cheddar and soft brioche bun for the most incredible mouthful! I couldn’t get over how flavoursome the combination was and we all wondered why it had taken this long for us to try this delicious dish! The night continued in to the early hours of the morning with more wine and even a Loch Ness monster themed caked served with with toffee sauce created with double cream and Thornton’s special toffee haha! Needless to say, we were all absolutely stuffed and quickly sank into the sofa feeling thoroughly satisfied with our fine feast. If you are having a belated Burns Night or simply have some left over haggis then definitely give these a try, they are exquisite!