Bunnychow is an innovative new food addition to the London food scene,  started about 18 months ago out of a truck, and prides itself in creating “little loafs filled with big global flavours”. The dish, the bunny chow, originated in the 40s from Durban, South Africa and was devised by Indian workers who came up with the clever idea of using bread as a container to hold their curry on the long walk in the blazing sun. Simply put a bunny chow is a hollowed out bread loaf filled with a variety of tasty stew recipes.

After travelling to the various pop up feast events in London and further afield to the likes of Glastonbury, they trialled a more permanent home in one of the containers at Box Park. This fast became too cramped though and it was time they found a larger home. A month ago, Wardour Street became that special place, in the heart of Soho and we were kindly invited down to see what all the fuss was about.

We went straight after work, which is probably their quietest point in the day. This meant they were able to be extra hospitable and emerged with small pots of each of the fillings, to allow us to choose our preferred choice. The peak service time is lunch and late nights at the weekend, as a bunny chow is the perfect dish to help sober up after a few too many pints. 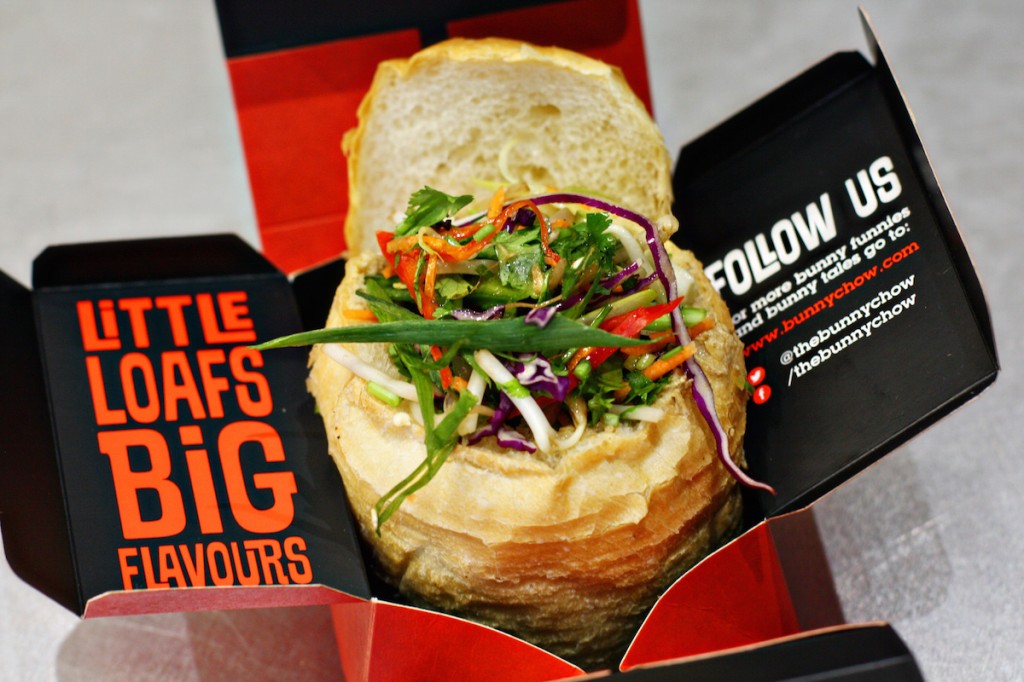 They’re great winter warmers, with the stews served piping hot and the additional bread helping to fill you up on a cold evening. We enjoyed all of them, although standout flavour pairings consisted of the ‘Pork ’n’ Pickle’, a mix of of pulled pork, slaw, homemade pickles and BBQ sauce. The second one of note was the ‘Bangcluck Bunny’ – chicken, squash, breansprouts and thai ginger sauce. All give a healthy kick of spice to them, which is not just great for the palate but also clearing a winter cold. And now there is even one to warm you up in the morning, the Full English Bunny, complete with mini Cumberland sausages, bacon and Bunnychows’ own handmade black pudding and baked beans, crowned with a poached egg. That’s one beefy breakfast for sure! 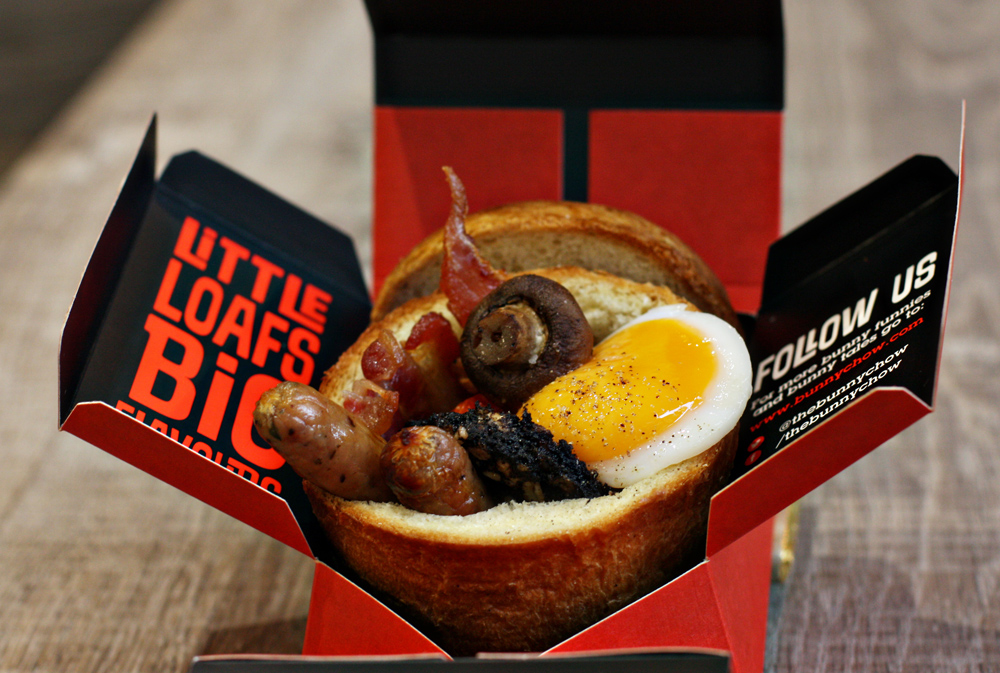 There’s a strong debate going on at Bunnychow known as ‘fingers versus forks’ and as you can guess, this relates to how patrons should eat their bunnies? We opted for the slightly more refined route of forks but there’s a definite urge to get messy and dive in with the fingers.
To close out the evening, we decided to sample slightly sweeter offering, the ‘Buffins’. As you know, we take our puddings seriously here at We The Food Snobs, so we decided to indulge in all three flavours. The Jaffa Buffin, Double Choc Peppermint or the Lemon Meringue Buffin. All are baked daily by their partnering artisan bakery and then Bunnychow has the final say by completing the fillings and muffin tops in house every morning.

There’s a great enthusiasm here and the founders are keen to make sure their vision for a Bunny-filled Britain is realised. We’re told the next stage of Bunnychow sees their bakery moving in house and to keep spreading the Bunny love as far as possible with wide expansion. It’s a nice alternative that provides a hearty Winter meal but still in the form of a fast and convenient setting, which is definitely worth popping in to on a cold night this November.
Enjoy!