Boopshi’s will open its doors on the corner of Fitzrovia’s Windmill Street on the 28th November to serve authentic Viennese schnitzels alongside seasonal spritz cocktails. Inspired by the recipes recorded in the diaries of their Austrian grandparents, Oma & Opa brothers Ed & Ben Robson have created Boopshi’s, a homage to their Austrian heritage combined with their love for a well made spritz cocktail. Having spent their childhood forever requesting their Oma’s Schnitzels, both brothers have worked hard to bring their grandparents legacy to life and develop this all-new concept for London. 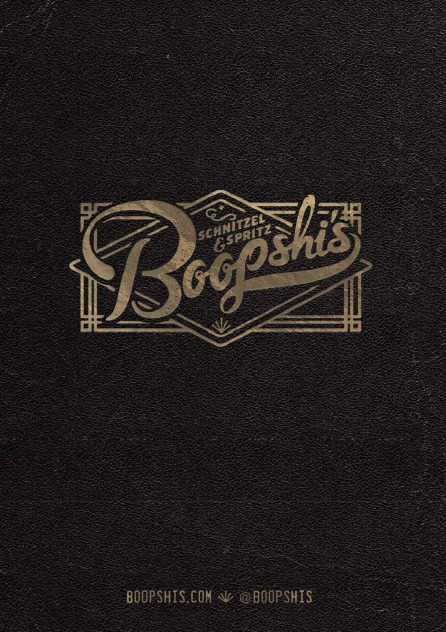 Serving a modern interpretation of classic Viennese dishes, Boopshi’s will showcase life long London influences alongside a variety of authentic Central European traditions and techniques. Made from the finest British rose veal, free-range chicken and rare breed pork, head chef and close friend Rino Scalco will fry each schnitzel using the traditional method of pan-frying to ensure a crumb cooked to absolute perfection. Alongside the signature schnitzel, Boopshi’s will serve a succinct yet eclectic menu that offers specialties including Bratwurst Sausage, Ox Tongue, Spätzle & Cheese and of course Oma’s own Apple Strudel.

Equal attention to detail has been paid to their drinks menu, with Prosecco served on tap besides a bespoke cocktail offering. Using their very own hand made sherbets, the cocktails will encompass a variety of seasonal combinations and ingredients, such as those found in the Spritz #5 – A heady mix of London Dry Gin, Apricot Puree, Orange and Lemon Sherbet topped with Prosecco.

Beyond the spritz cocktails are Boopshi’s own inspired libations – twists on traditional cocktails such as the whisky sour, or as Boopshi’s has termed it ­ the Sachertorte sour. Even Boopshi’s house martini has been stamped with their own personality, swapping the conventional vermouth for Kümmel.

And how could we forget the Austrians love for beer! An exclusive brew will be on draught, developed by Ed & Ben alongside their long-time friends at Camden Town Brewery.