Based on the corner of Fitzrovia’s Windmill Street, Boopshi’s is the latest restaurant to open its doors and with it comes an exciting re-imagining of Austrian cuisine. Brothers Ed & Ben Robson are the creative minds behind Boopshi’s, drawing inspiration from the recipes recorded in the diaries of their Austrian grandparents. Having spent their childhood forever requesting their Oma’s Schnitzels, both brothers have worked hard to bring their grandparent’s legacy to life and develop this all-new concept for London.

As far as I am aware this is the first restaurant of its kind in London, so I was pretty excited to get down there and put the menu through its paces. We headed down a couple of days after the launch night to find the place already starting to fill out at 6:30pm. Wasting no time, we ordered a couple of the much talked about Spritz cocktails, I chose #3, a combination of Grapefruit Vodka, Sherbet, Grapefruit Soda & Prosecco, whilst my dining companion went for #5, London Dry Gin, Apricot, Sherbet & Prosecco. 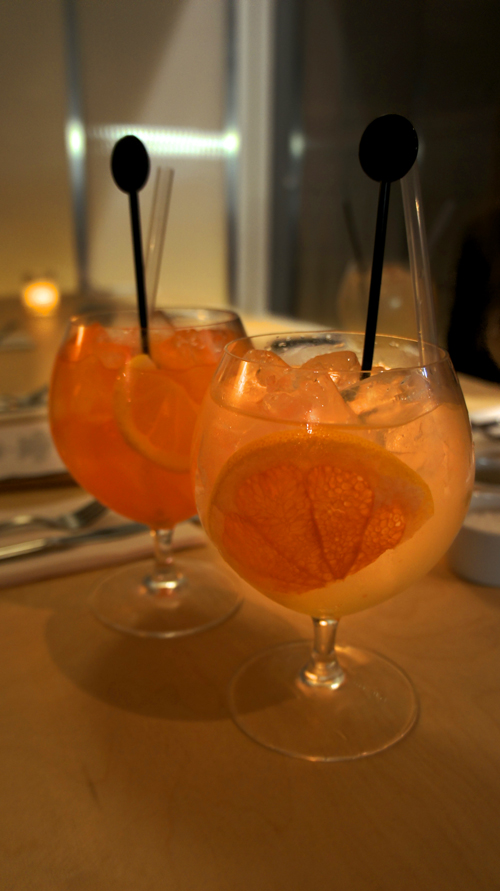 The Spritzers arrived in great big spherical fishbowl style glasses and were absolutely delicious! The finishing flourish was definitely the homemade sherbet that added a real zing to the cocktail. 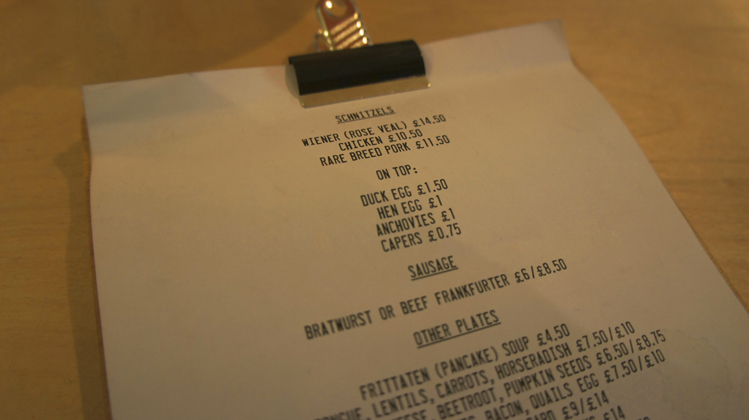 When the rest of our party had arrived they ordered themselves a few Spritzers too, before deciding that the best way to get a real look at the Boopshi’s menu was to simply order everything haha! Soon enough, we were struggling to find room on the table to try and squeeze the never ending delivery of different dishes. We had ordered all the Schnitzels on the menu, Rose Veal, Chicken & Rare Breed Pork all with diffrent toppings. Although, I steered well clear of the Veal with Anchovies, Egg & Capers; that was just too many flavours in one dish if you ask me. My favourite was probably the Chicken Schnitzel, it was really succulent and tender and due to their traditional method of pan-frying the meat, the breadcrumb skin was cooked to a delicious crisp! 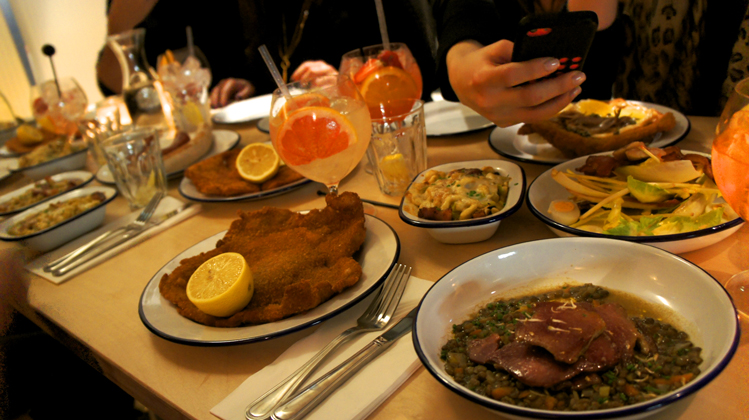 One of the stand out dishes for me was the Spatzle ‘N’ Cheese, best described as an Austrian twist on Mac ‘N Cheese. It was a mix of a gnocchi style pasta, with mushrooms and bacon, covered in a delicious molten cheese. The Bratwurst & Frankfurter were also worthy of mention due to their rich and meaty flavours, although I felt the presentation was slightly lacking or perhaps I am just too used to the American ways of sliding them inside a nice bun. 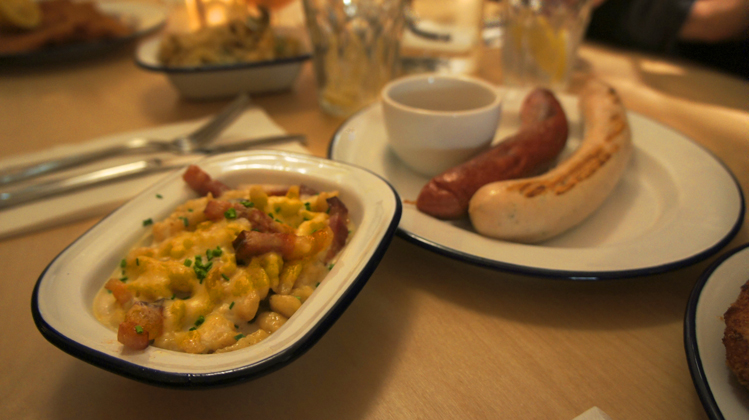 The Goat’ s Cheese & Beetroot Salad with Pumpkin Seeds also went down well, providing a contrast to the meat feast that was being had.

The Ox Tongue & Lentils dish with Horseradish was a more authentic European dish relying on simple ingredients to produce a powerful flavour. 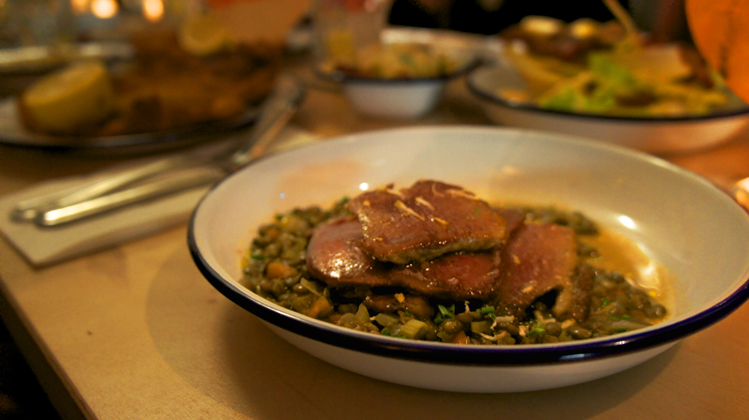 Eventually the plates stopped arriving though and we managed to make a good dent in all the food. We slurped at the final dregs of our Spritzers and then made a move for the dessert menus. Again we ordered a few of the dishes but I had my eyes firmly set on one in particular! This is the Sachertorte and it was incredible! A dense but moist meringue based chocolate sponge with a thin layer of apricot jam running through the middle, finished with a rich dark chocolate icing. My simplistic description of the flavour, would be to say it tasted like a more indulgent version of a Jaffa Cake. It was refreshing and rich, with my only improvement being that I wished there was more of it! 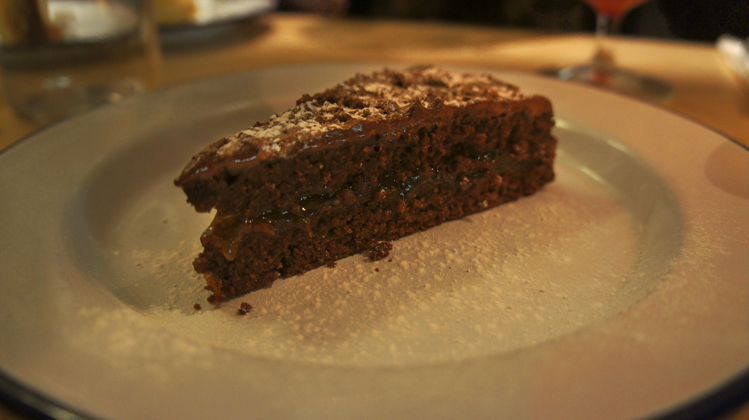 I was also lucky enough to try some of Oma’s Own Apple Strudel covered a in a light and creamy custard. The only way to serve strudel if you ask me! Like the mains before, it was a hit with me but I think the Sachertorte won it for me. 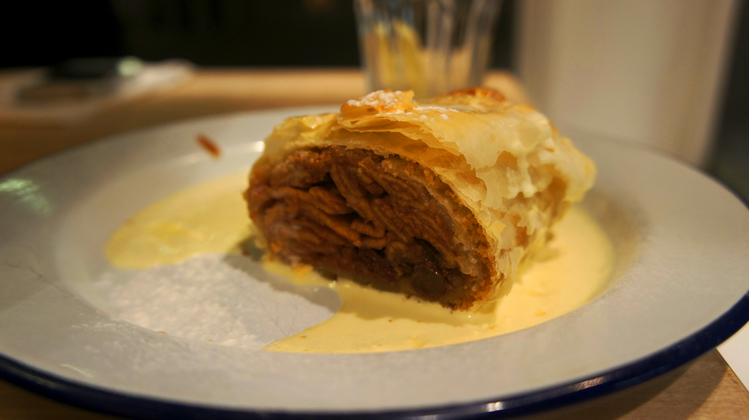 After the meal we made our way underground into Boopshi’s cocktail bar to get our hands on some more of their Spritzers. If Spritzer’s aren’t your thing though, have no fear! Boopshi’s have a great cocktail list full of twists on traditional cocktails such as the whisky sour, or as Boopshi’s has termed it ­ the Sachertorte sour. Even Boopshi’s house martini has been stamped with their own personality, swapping the conventional vermouth for Kümmel. They even have Prosecco on tap too, so there literally is something for everyone!

So head down now and grab a slice of Austria and if you aren’t a fan of schnitzel (although I strongly suggest you try it) the Spritzers alone are worth the visit!