Ben’s Canteen is a great little neighbourhood hangout, open 7 days a week and located a short distance up the hill from Clapham Junction. I was previously unaware of Ben’s Canteen, that was until I realised that there was a need to feature more restaurants on the site that were located South of the river. After a quick tweet to WeTheFoodSnobs’ followers, asking for some South London recommendations, I was soon heading to Ben’s site to check out their menu. I was impressed to say the least and was surprised I hadn’t seen their name mentioned on Twitter before! 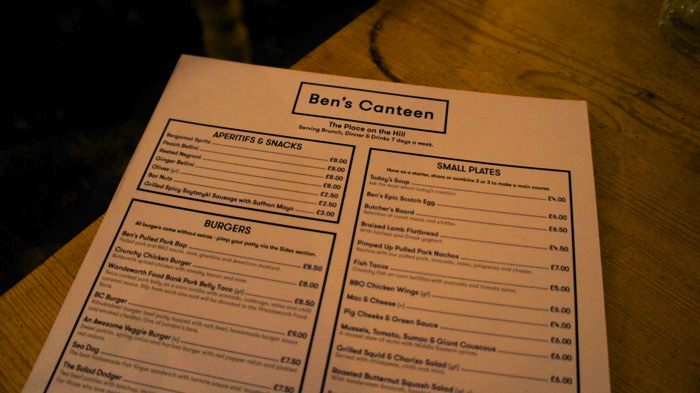 Ben’s Canteen boasts a menu of burgers and a long list of small plates that is more of a checklist of all the latest food trends this year! You’ve got BBQ Chicken Wings, creamy Mac & Cheese, Pig Cheeks, Fish Tacos, Scotch Eggs and more!

Decisions were going to be tough and at the fear of food envy of my friend, I took a step back and made for the cocktail list before making any decisions on the food. My guest for the evening decided to indulge in a G&Tea Sour, a mix of Earl Grey infused Gin, Mango Liqueur, Fresh Lemon , Grapefruit Juice and Egg White. A smooth and delicate tipple to match the man sipping it haha! For me there was only one option and probably a predictable one if you’ve been paying attention to my recent tweets. Being the cider fan that I am and the fact that Winter means mulling season, I had to go for the Spiced Cider Punch! A tangy concoction of Cider, Elderflower, Herbal Liqueur and a touch of Bourbon! 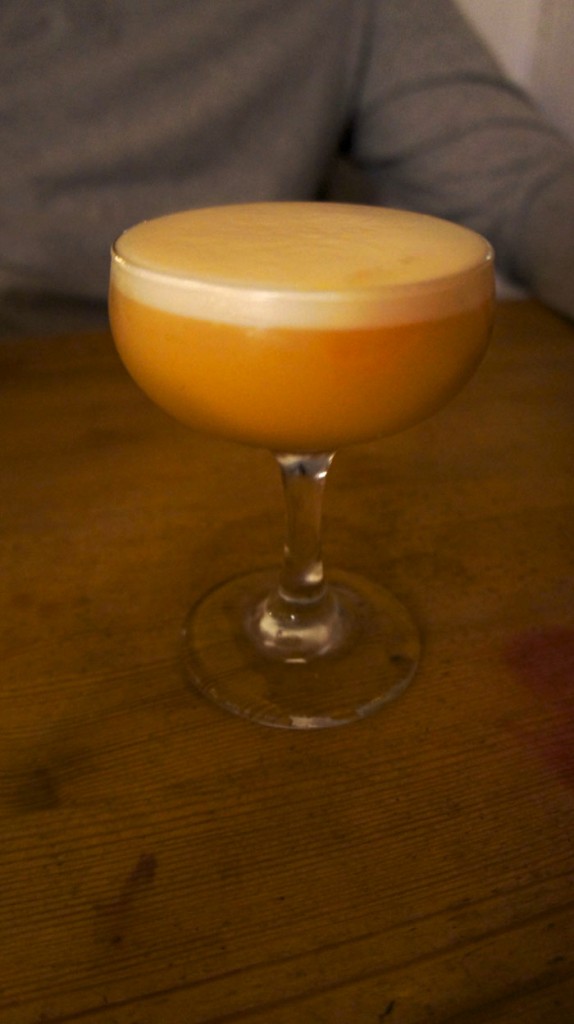 When we finally got down to the chow, we decided to start the feast off with some BBQ Chicken Wings, piled high and covered in a sticky and smokey glaze! 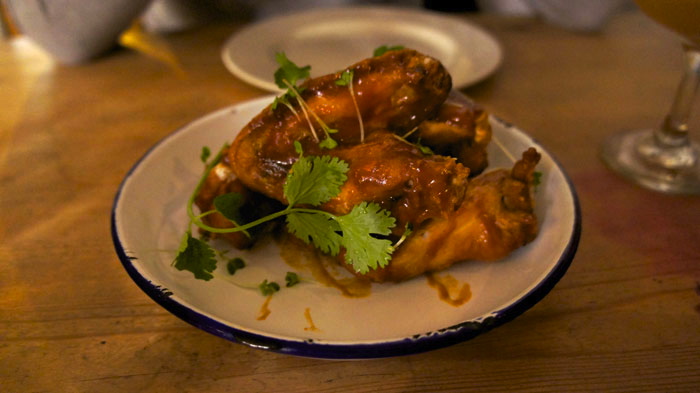 Now the wings were spot on, don’t get me wrong but the real reason we were here, was to test whether the burger scene South of the river could live up to the quality that is found further North. They have a great selection to choose from, depending on how filthy you want to make your experience. I wasn’t here to mess around though, so I went all in and ordered the aptly named Salad Dodger! A brioche bun filled with two Beef Patties, Double Cheese, drenched in Mustard & Ketchup and topped with Smoked Bacon. Not a lettuce leaf in sight! 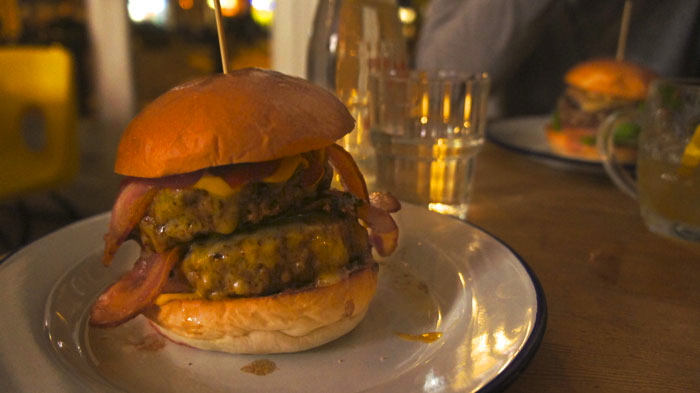 To go with it, we ordered a side of Deep Fried Pickles, much like the courgette fries from Byron but thicker cut and super juicy. 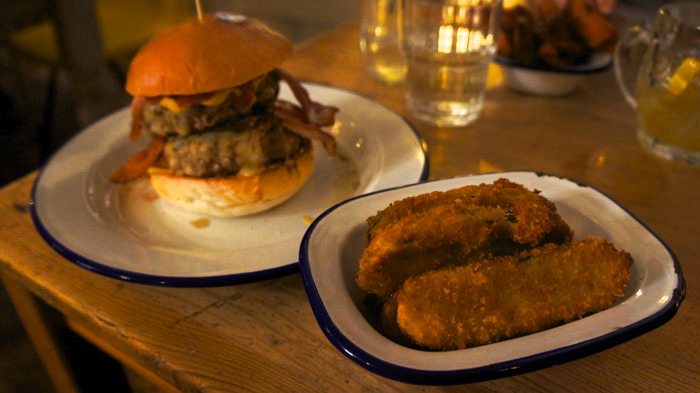 A portion of Sweet Potato Chips too. These were probably the best I’ve had in London if I’m honest. They were seasoned so well and I found out later that they had even won awards for their taste! 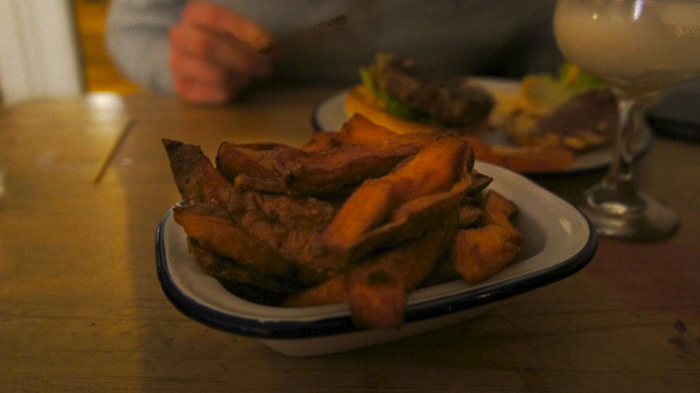 Check out that cross section on the Salad Dodger! I was impressed it was still slightly pink as I had forgotten to ask to have it cooked medium rare. The juices were already flowing freely from the double patty layer and I knew this was going to be extremely messy. The Salad Dodger did exactly as the name suggests,; packing each bite full with an intense mix of well seasoned meat and the double cheese only added to this gluttonous stack! It was seriously good and could easily give some of the big names of the burger industry a run for their money. 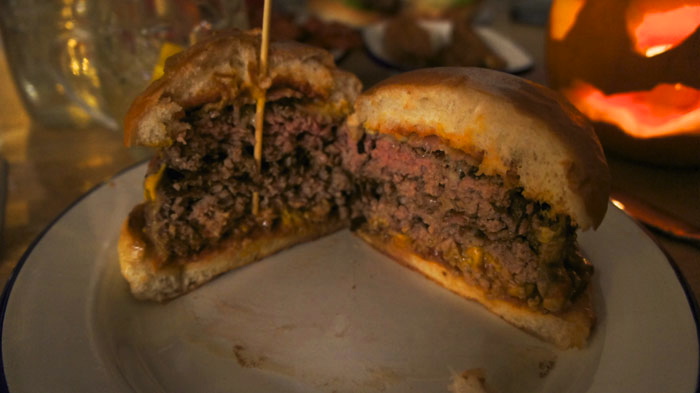 My chum kept to his elegant G&Tea Sour sipping image and went for the more sophisticated and well dressed BC Burger. The secret and original ingredient in this tower was the Salt Beef that sat atop of a patty made with two different types of beef, Smoked Cheddar, Homemade Burger Sauce, Lettuce & Tomato. This sat very well with him and was the first time I’d ever heard of salt beef being added to a burger! 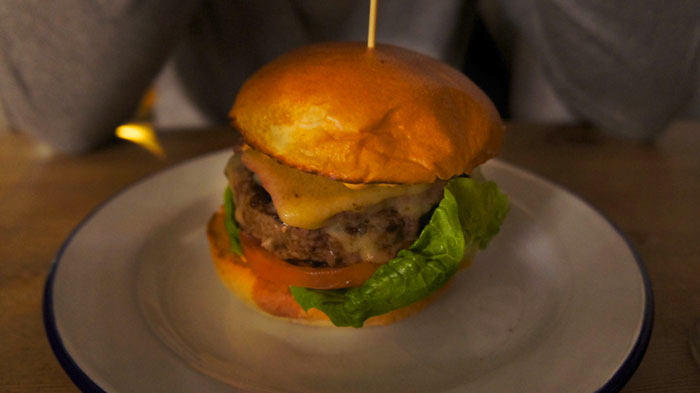 Where in some establishments, the pudding round is seen more of an offering out of necessity, Ben’s Canteen creates indulgent treats to perfectly top off the savoury courses. I opted for the Wandsworth Food Bank Dark Chocolate Mousse &  Salted Caramel Cup with 50p from each one sold going to the Wandsworth Food Bank. It was a rich dessert that was incredibly addictive and saw me trying to wipe up every last smear of Salted Caramel sauce. 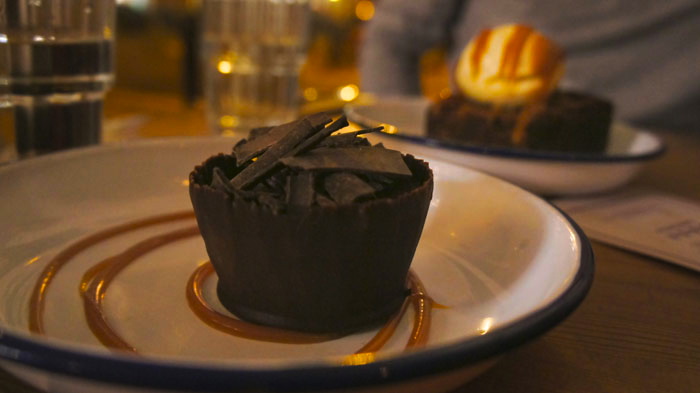 My guest followed the advice of our waiter, after his high praise for the Double Chocolate Brownie with Ice Cream & Salted Caramel Sauce. It is probably the most popular dessert in the industry and can differ in quality depending on the establishment. However, his reaction was one of sincere satisfaction, with him quickly proclaiming just how tasty it was. I was lucky enough to steal a bite before it was all gone and I too was soon smiling with delight. The brownie was served hot and half baked so that the centre was gooey inside. The cold ice cream contrasted with the warmth of the brownie and cut through the richness added by the salted caramel sauce. 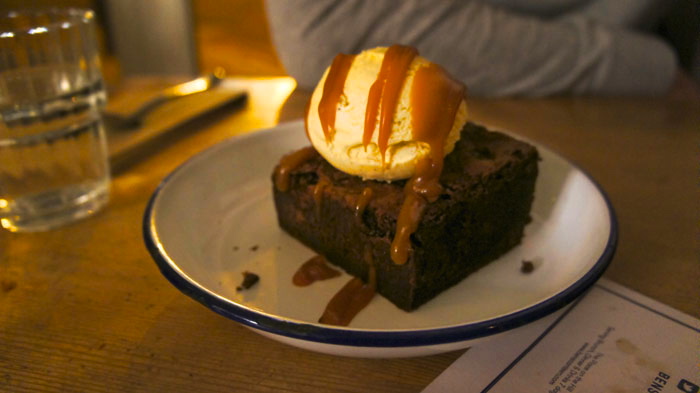 Ben’s Canteen provided an amazing night of indulgent comfort food and was the perfect start to my quest to find more of South London’s hidden gems. I have instructed all of my friends South of the river to head on down to sample it for themselves. One has already followed my recommendation and visited Ben’s last night. He dined on the Chicken & Parmesan Schnitzel with Smokey Tomato Salsa & New Potatoes, followed up by the Brownie, which he described as “divine!” So what are you waiting for? Ben’s Canteen is open seven days a week and has an excellent range of dishes and cocktails and an atmosphere to match. Perfect for a Winter’s night in Clapham!