London Cocktail Week has been and gone but have no fear, the Appleton Rum Tour is here! Last week, the fabulous Cutlass Communications invited me along to a very special afternoon and evening with Appleton Estate Rum and their awesome head blender David Morrison.

The afternoon session was set in Hawksmoor’s Spitalfields Bar where we tucked into their incredible bar menu, sampling all that it had to offer. XO Chicken Wings, Kimchi Cheeseburgers, Fillet ‘O’ Fish, Chilli Cheese Dogs, Triple Cooked Chips, the insanely good Ox Cheek Nuggets and of course, Salted Caramel Rolos!

After stuffing ourselves full, we headed over to a couple of booths where we were met by an array of glasses and bottles filled with different types of rum. We were then introduced to David, who took us through a simplified version of the blending process that he regularly goes through to create Appleton Estate’s Rum. After our lesson in blending, we were all set a challenge of creating our own combination using four different styles of rum. The only instruction was to blend a rum that would be used for mixing in cocktails. Everyone’s finished product was then taste tested by David himself, who then announced the winning blend. 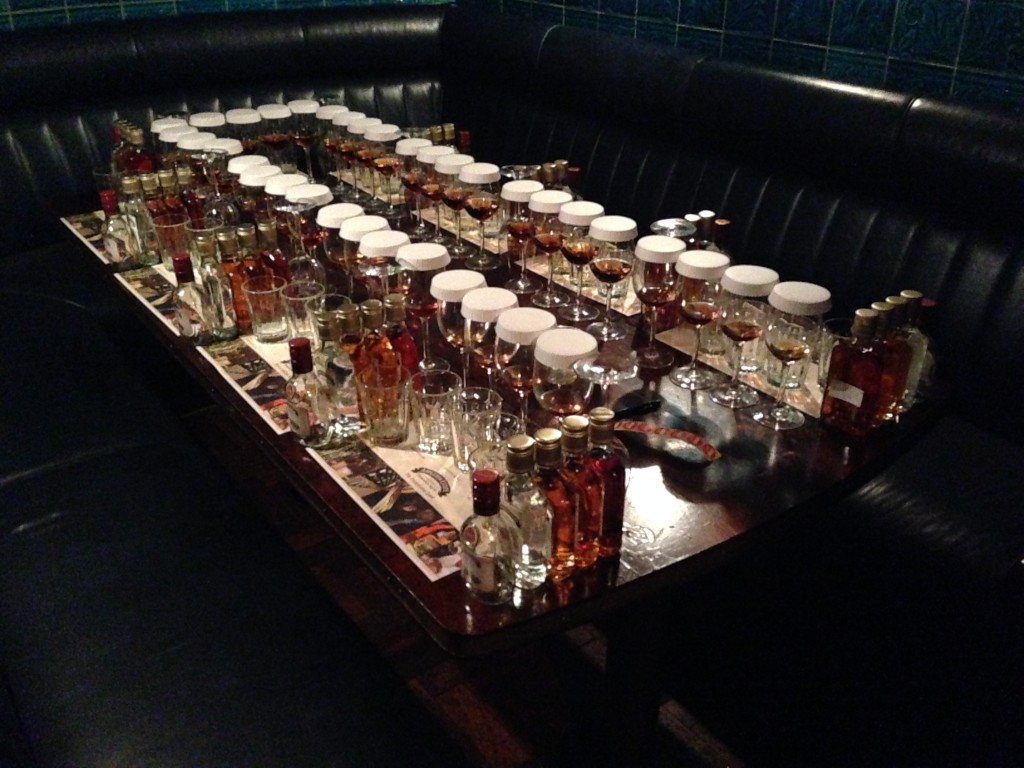 Sadly, my rum was not victorious, so my dreams of taking over David’s role in Jamaica when he retires were quickly put to rest! We did get to take our hand blended bottles of rum home though and I can not wait to crack mine open for a special occasion. 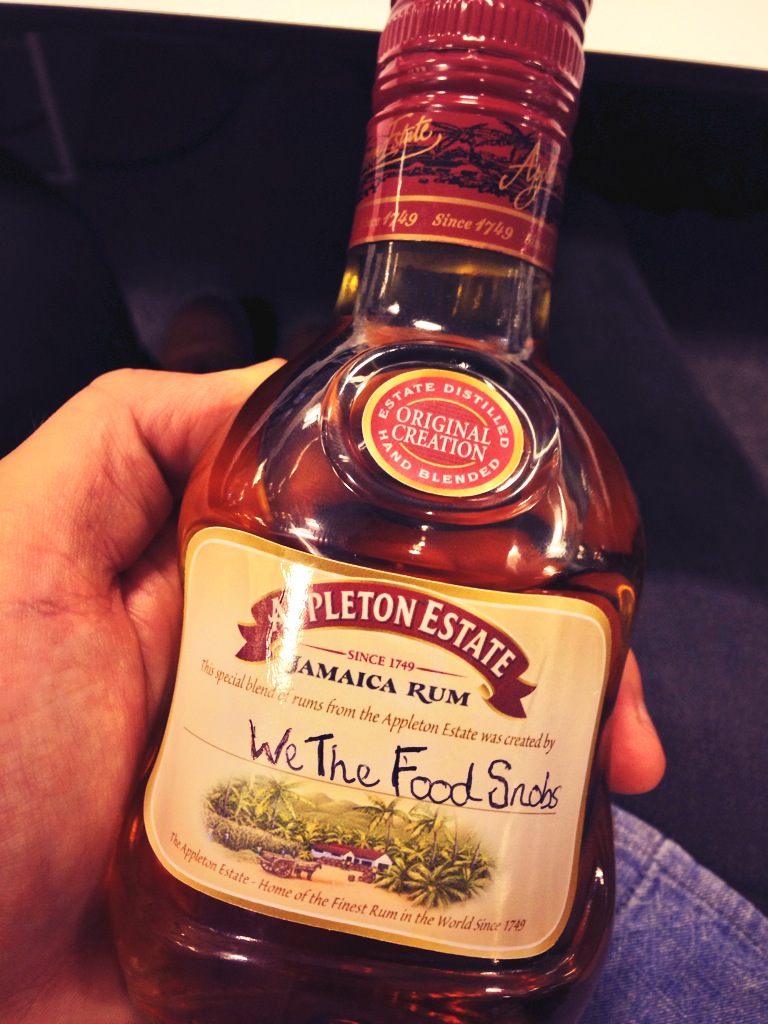 After finishing work, I hurried back to Hawksmoor for the start of the much anticipated #DiscoverRum tour. We rejoined David at the bar, along with brand ambassador, Nick Worthington for our first cocktail of the evening. I kicked the proceedings off with ‘The Rich Around’, a mix of Appleton’s VX Rum, Blue Curacao, Lime & Orgeat. Followed by ‘The Golden Delorean’ – Appleton’s VX, Orange, Half & Half, Cacao Blanc & Vanilla. Both were absolutely delicious and set the bar high for the next two stops on the tour. 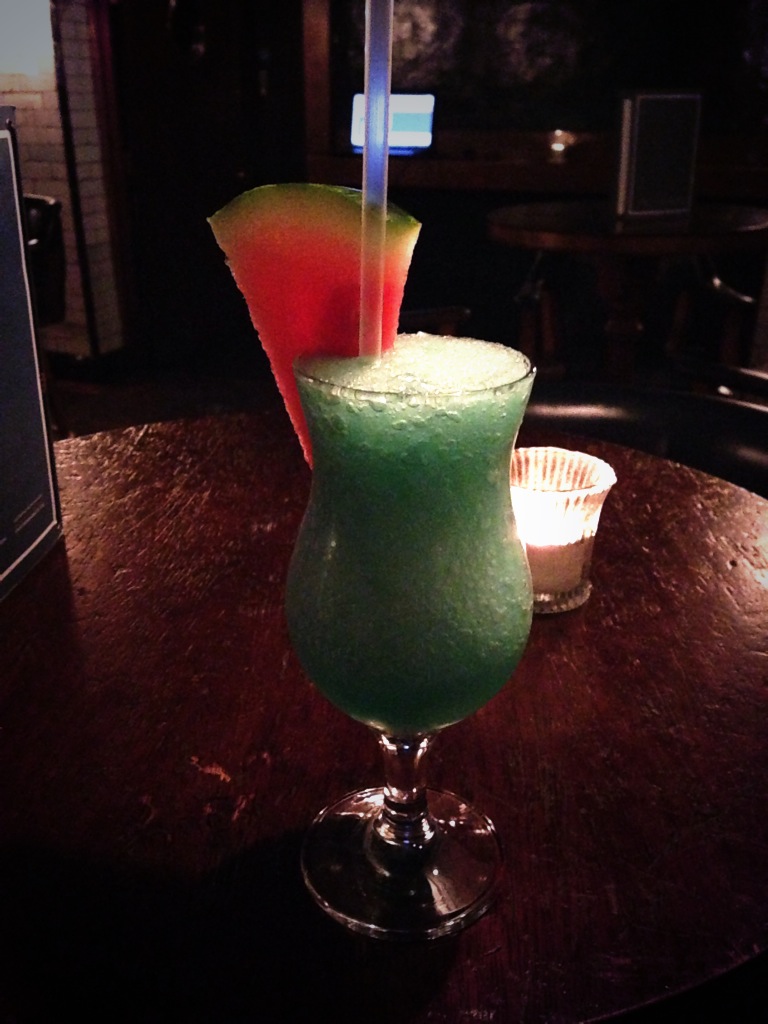 We hailed some cabs and told the driver to head for Shoreditch’s Clove Club. They say “Eating is cheating!” but when you’re presented with an opportunity for dinner at The Clove Club, said rule is quickly chucked out of the nearest window. Our first cocktail of the meal was an ‘Ernest Bru’, delivered in a jam jar with a Scottish influence. Ernest Shackleton and Irn Bru were the inspirations for this little tipple and it was created using Applteon’s VX, Aperol & Lemongrass. 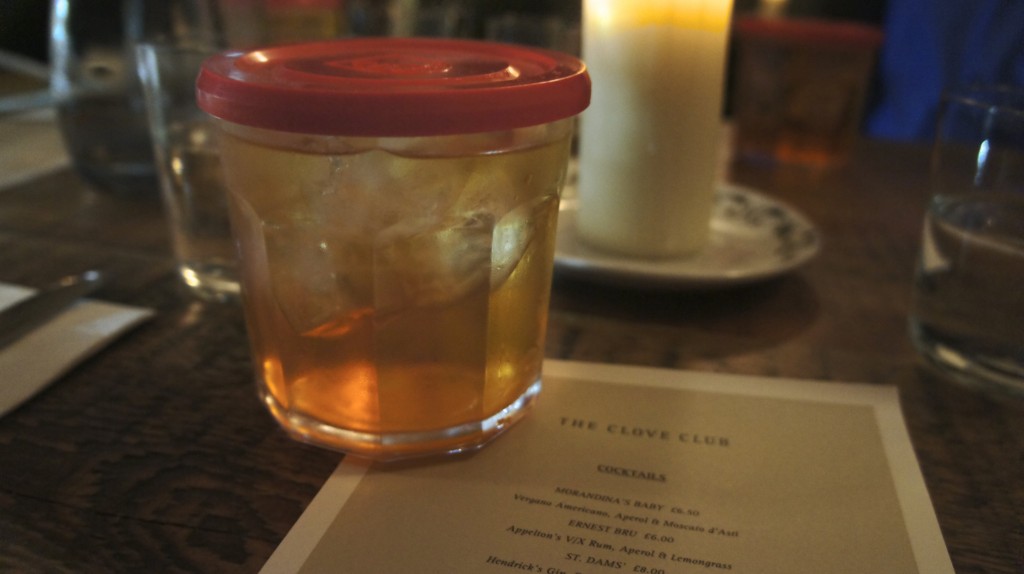 We managed to squeeze in another cocktail before leaving, this one was named ‘The Thirteenth’. It was my favourite of the two and again it included Appleton’s VX Rum with Apostoles Palo Cortado. A definite sipper, this was a palate warming drink with a delicious caramel flavour. 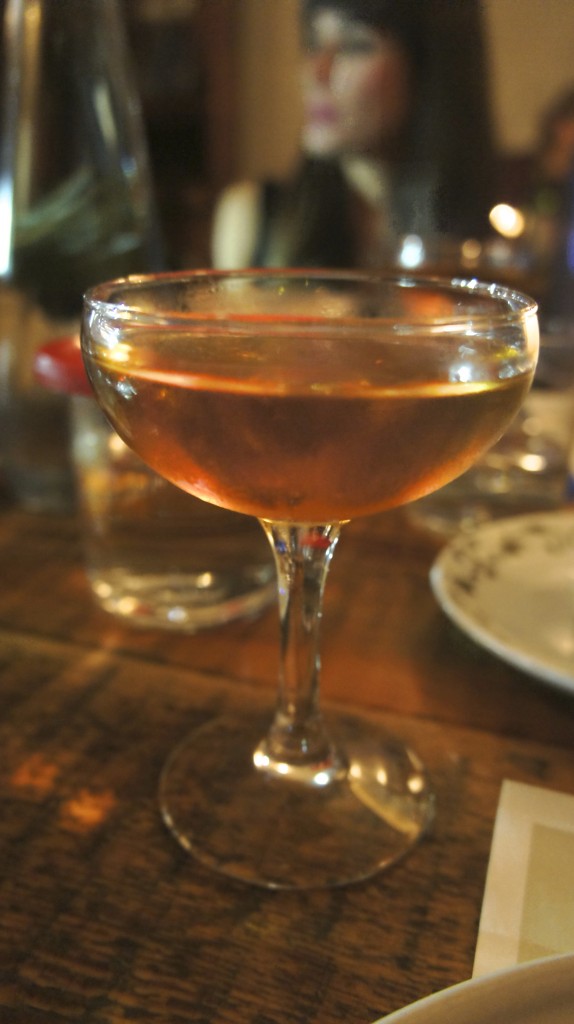 It wasn’t long till we’d sunk the last drops though and we were soon climbing into the back of another black cab and heading to the final stop of the night. Portside Parlour to be precise! Unknown to me before the evening, Portside Parlour grew to be my favourite of the tour. A little Hackney speakeasy, found through a bathroom facade, underneath the Off Broadway bar.

Described as a “captains quarters set to a backtrack of Rock n’ Roll blues basked in candle light. It’s the place where time eludes you and the urge to leave is far overcome by the comforting beast in your belly. PortSide Parlour is East London’s first Rum bar & is in collaboration between the team at PortSide and Jamaica’s finest Rum Appleton Estate. Holding 50 of the worlds finest rums and making some of the finest cocktails in the east.”

With that introduction, it seemed like the perfect way to end the night!

The cocktail menu made for an interesting read, full of different concoctions that used Appleton Estate’s rum as the base spirit. 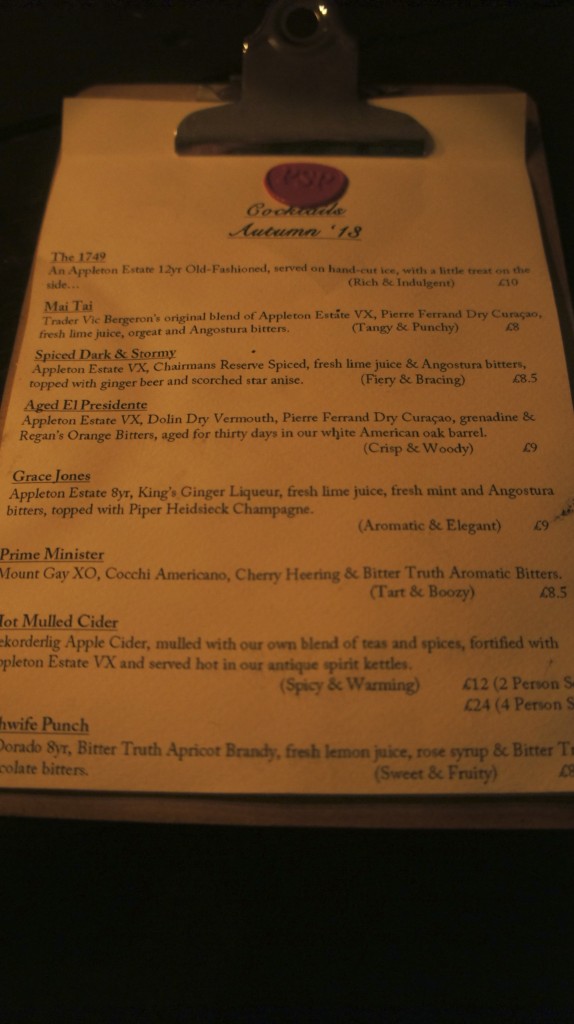 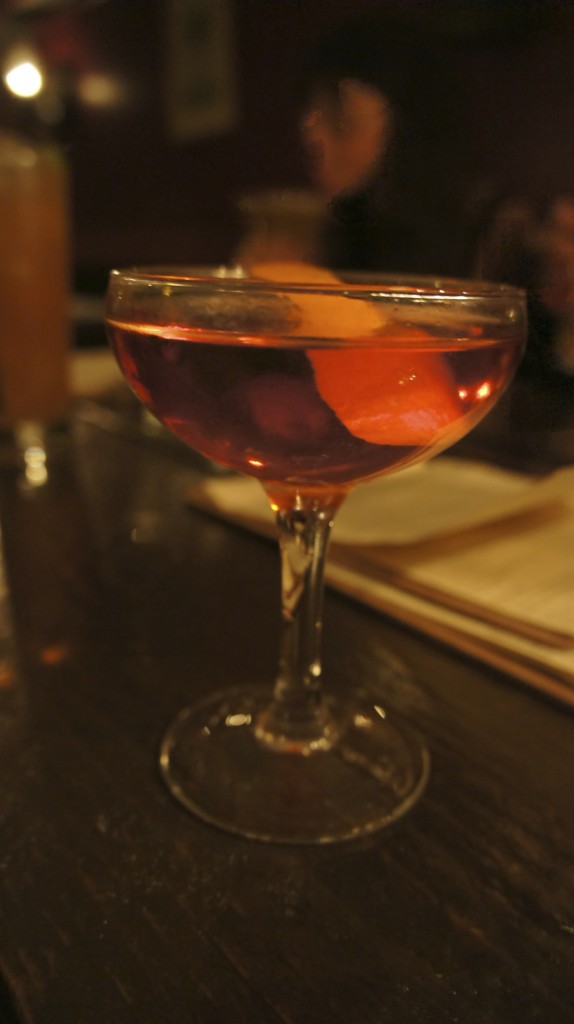 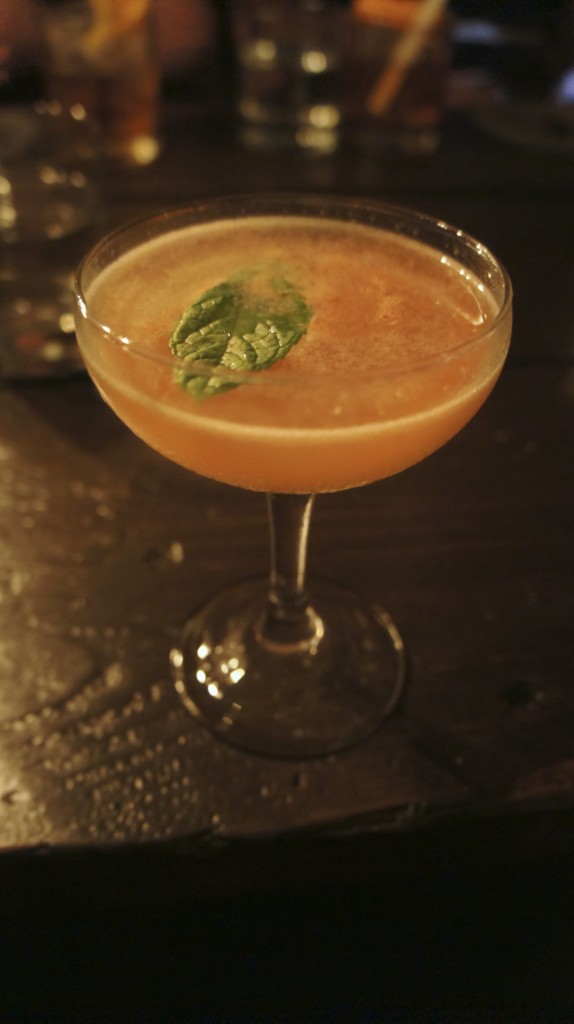 One of my favourite drinks of the entire tour though was Portside Parlour’s ‘Spiced Dark & Stormy’. This was a delicious mix of Appleton’s VX, Chairmans Reserve Spiced, Fresh Lime Juice & Angostura Bitters, topped with Ginger Beer & Scorched Star Anise. It was a fiery mix and the star anise brought a great twist to this cocktail bar staple. 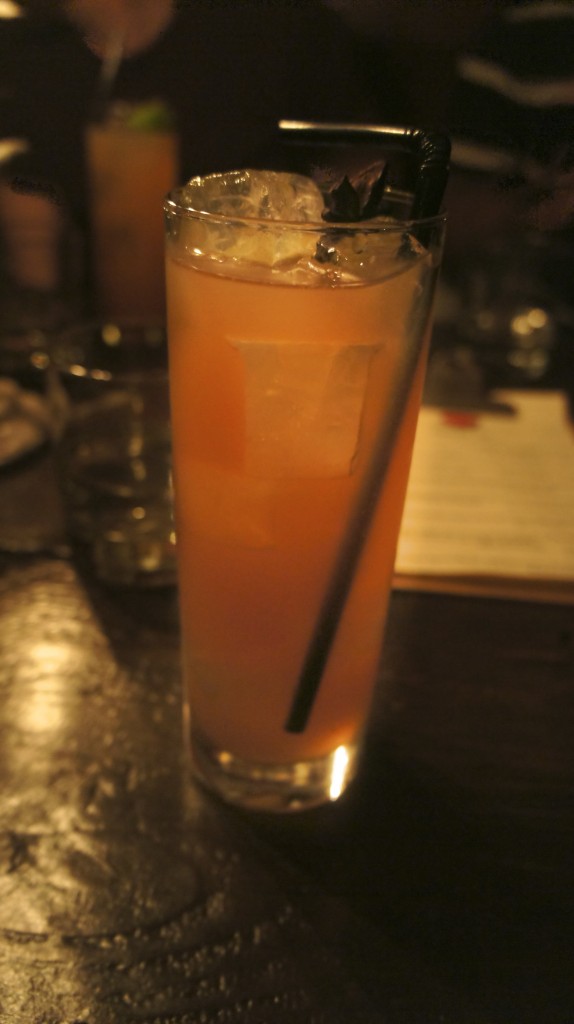 My drinking partners indulged in another favourite of the night, ‘The 1749’. It used Appleton’s 12 year old rum to create an Old Fashioned, served over hand cut ice with a little treat of Green & Black’s Orange Infused Dark Chocolate. 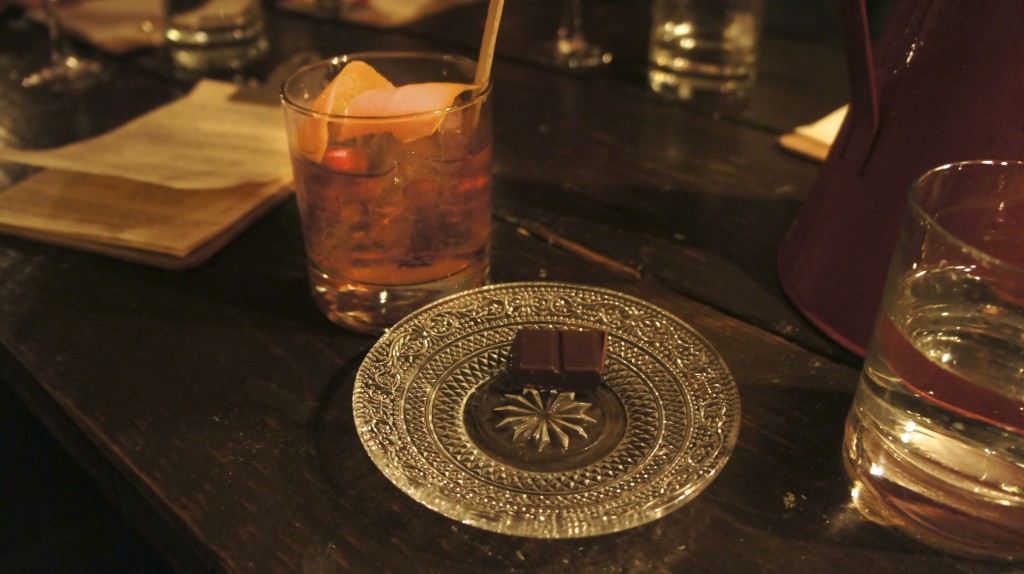 With the final sip of the cocktails, there was only one way to finish off the night. Everyone was presented with a little nightcap of Appleton Estate’s 21 year old rum, before journeying home. This was absolutely delicious and so smooth. The funniest part of the night was reserved for when I jokingly asked David for some Diet Coke to mix with his beloved 21 year old. He almost choked on his rum and replied “if I see you mixing coke with my 21 year old, there’s going to be problems”. 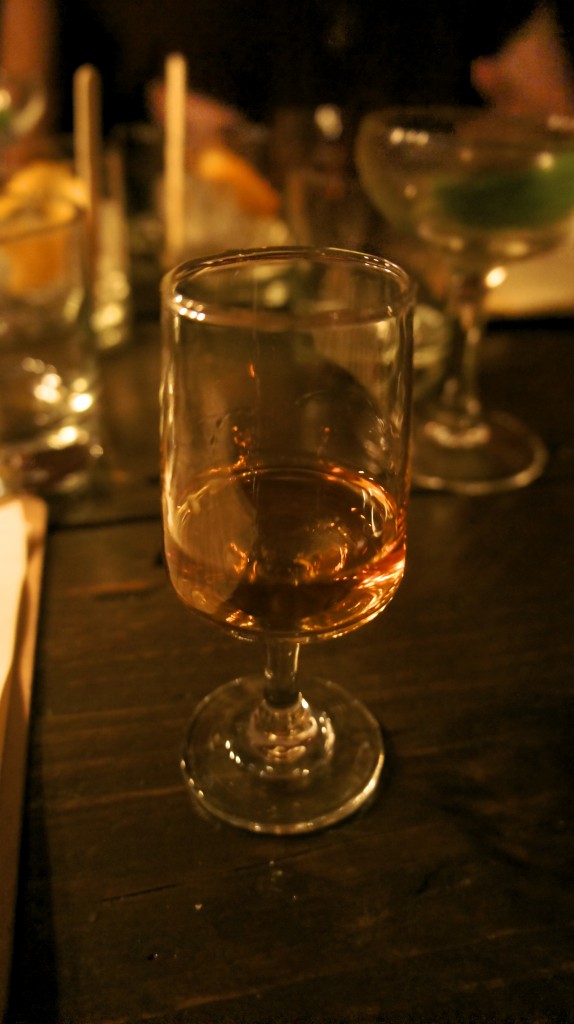 If you are a rum fan you need to keep your eyes peeled for the next rum tour, as it was such an incredible night. It was the perfect platform for trying Appleton Estate’s different rums in an array of cocktails. More than anything though, it was a brilliant night meeting lots of new faces. I honestly don’t think I have laughed so hard in a long time. The company was top notch and David’s ability for storytelling kept me engrossed the whole evening long, add that to the fact he has the most infectious laugh in the world! If the opportunity presents itself to join the tour for the evening, do not hesitate! Get on board immediately and get ready for a taste of Jamaica’s finest rum, Appleton Estate Rum.