As a former resident of Brick Lane, the opening of All Star Lanes and the squads of city workers on team-building outings that flocked towards it felt like the nail in the gentrification-coffin of the area. It certainly marked the start of a new era – one in which 93 Feet East would never be cool again and the mad old antique shops were replaced by high-street gift stores selling novelty cocktail shakers and risqué greetings cards.

Now that my former flat on Sclater Street has been all but demolished to make way for an impossibly shiny, high-rise building I couldn’t afford to live in even if I wanted to (sorry, am I starting to sound bitter?), I’m kind of over my inverted snobbery for All Star Lanes, and so went down at their invitation to check it out. 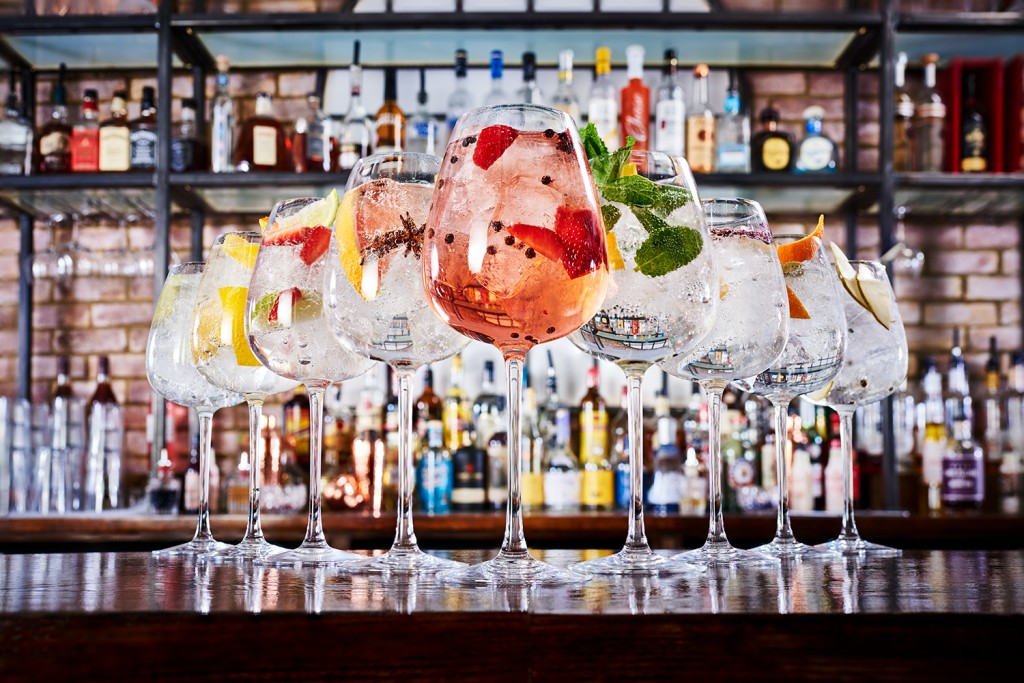 As expected, it’s full of pinstriped suit blazers hung over chairs and starched shirts fresh from the boardroom with their top buttons undone… but the atmosphere’s undeniably buzzy, even on a Tuesday. All six of the bowling lanes are packed with whooping teams slurping cocktails from the well-curated “Gins + Pins” list. Each drink is named after its base gin, paired with a craft tonic and a garnish to match that gin’s botanical profile. We go for a Bloom – fruity and fresh, served with strawberries, lime and Fever Tree’s elderflower tonic – and a Gunpowder, which is savoury and sophisticated with a wedge of bitter grapefruit, spicy star anise and Fever Tree’s Indian tonic.

You can also order snacks and sharing food to the lanes while you bowl, or, if you’re not feeling sporty, sneak off to one of the comfortable booths on the other side of the bar, but we’re working up an appetite for dinner. The all-American menu promises to be filling.

After knocking down no more than a handful of pins (we’ll have to work on our technique before our next visit) we decide we’ve been sufficiently active to have earned some gourmet junk food, and wander through to the restaurant. The friendly staff talk us through the menu and bring us another drink. They’re exactly as chatty, lively and laid-back as you’d want in this sort of a venue.

The special is tempting – Dingley Dell pork frankfurter with beer fried onions, ketchup and mustard in a brioche bun – and there’s a delicious-sounding invitation to ‘make your own Mac’ with toppings including truffle oil, treacle-cured bacon and lobster tail to choose from. It’s the ‘High Roller’ burger, however, that we can’t quite resist. A Wagyu beef patty, grilled lobster tail, Creole mayo and slaw are packed into a brioche bun, propped up with two prawns on a skewer. The patty has taken on a deliciously dark, smoky flavour from the grill, but the lobster tail has sadly seen a touch too much heat. 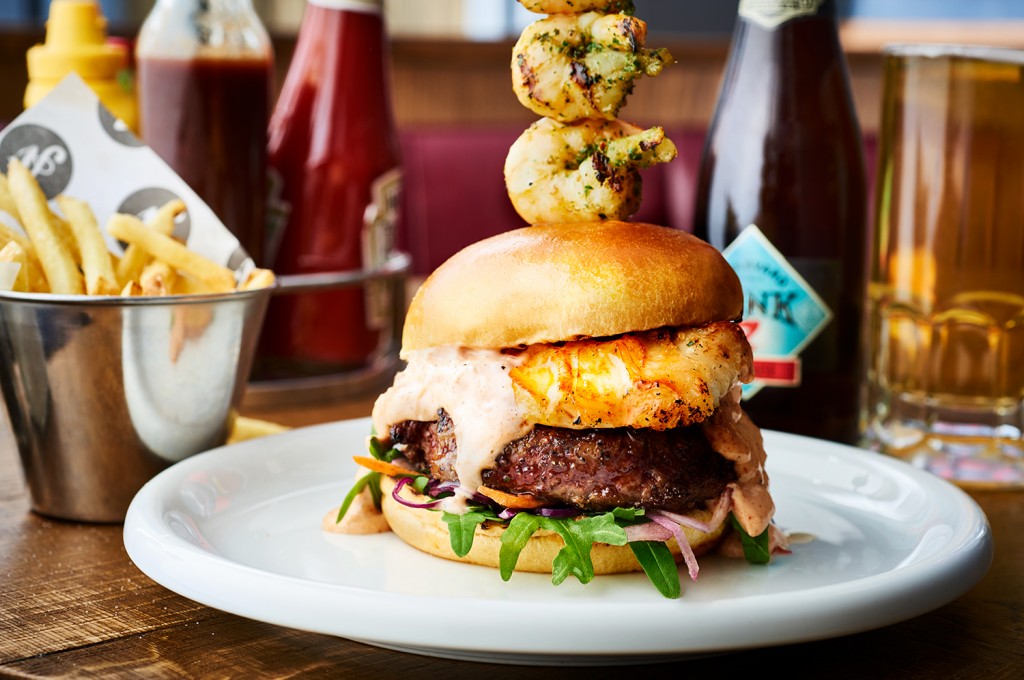 We have this with cornflake-coated crispy chicken dipped into tangy IPA sauce with a bold kick, as well as the irresistible Reuben fries:  skinny chips loaded with salt beef, sauerkraut, proper, smoky cheese sauce and pickles. There’s also the warm, doughy delight of the tear-and-share pretzel bread, which is served with two dips that we insist on keeping hold of throughout the meal: molten garlic butter and three cheese & Goose Island IPA sauce.

We’re persuaded into ordering something sweet by the waiter; a choice which was made easy given that one of their puddings is actually all of their puddings in one. The ‘Spoilt for Choice’, a trio of American desserts worthy of even the most patriotic of US diners, consists of their home-made salted chocolate fudge brownie, a miniature M&Ms cheesecake and a teeny-tiny Key lime pie.  They’re described on the menu as ‘shots’, but are very much solid, which is a good thing.

If you’re a hipster snob who sees anything themed as intrinsically contrived, All Star Lanes might not be for you. But if you’re looking for a decent evening out Shoreditch and something a little more interactive than straight-up food on a table, it’s a really fun place to spend an evening. Keep an eye out for us at our next team bash.