Here it is, the final piece to the burger puzzle! This is not to say that my love affair with burgers is over as there are still many more on my list to try but I think it’s time I drew a line under them for now and found something different to spend my hard earned pennies on. As promised, Mark and myself will also be shedding some light on Cheltenham’s strongest competition to the London scene, which we had the pleasure of trying before I left.

So let’s get down to it!

Now BBQ Whisky Beer isn’t a new name on the pop-up block but for reasons unknown to myself they have had a few months out and have arrived back on the scene at The Wargrave Arms, a few yards down from the Edgware Road tube station. I had followed these guys on Twitter whilst still living in Cheltenham, dreaming of this very day when I’d be able to live in London and freely gorge in the capital’s finest pop-ups and eateries. So when I caught wind of their reformation I contacted my friend Jamie and we headed off as soon as possible.

When we arrived at The Wargrave Arms we were happy to find our reserved table waiting for us! Yes that is right, reserved! An all too unfamiliar site these days. The Wargrave Arms is a dimly lit but cosey pub. I do tend to prefer this sort of environment as it seems to offer a bit of privacy for you and your dining partner. The other great thing about this place is it boasts the largest collection of Scottish single malt whiskies in the whole of London! I am yet to confirm this fact but from the looks of their bar, you’d be an idiot to bet against them. 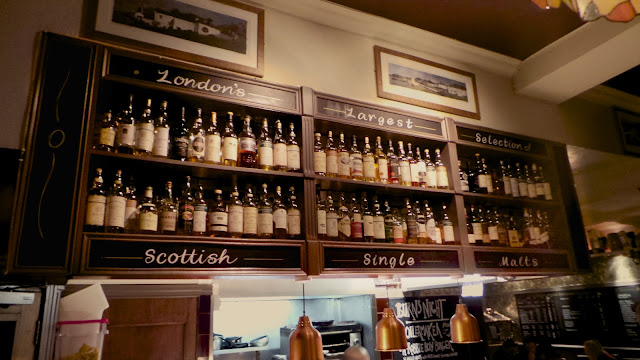 With Stowford Press on tap, the beverage choice was an easy one for me. Jamie went for a Winter Warmer ale and we grabbed two menus and then set about deciding on what we were going to feast upon. I had been desperate for a big chunk of meat wrapped in a brioche bun all week so as soon as I saw it offered with a topping of pulled pork, I was sold! Jamie was caught in two minds and after a recommendation from the waitress, he decided to go for the Pork Ribs. What was even better was that just like the wonderful people at Honest Burger, these guys deliver your chips with your meal free of charge! Well done indeed! 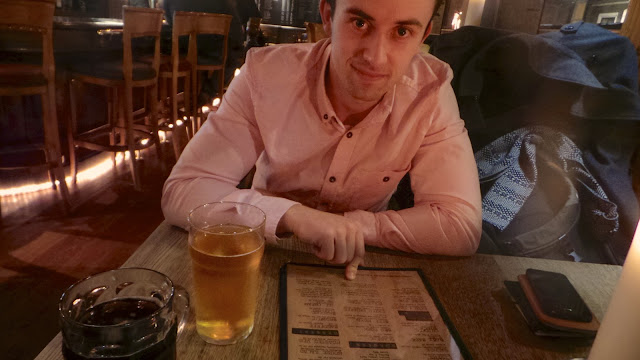 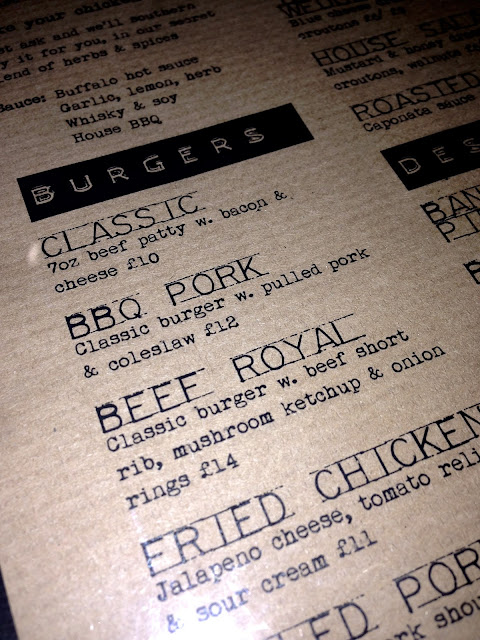 The food arrived just as the pub started filling up and it was a welcomed site as I was ravenous! My BBQ Pork Burger was stacked high with juicy pulled pork, smoked bacon and home made coleslaw and Jamie’s Pork Ribs came covered in a delicious BBQ glaze. 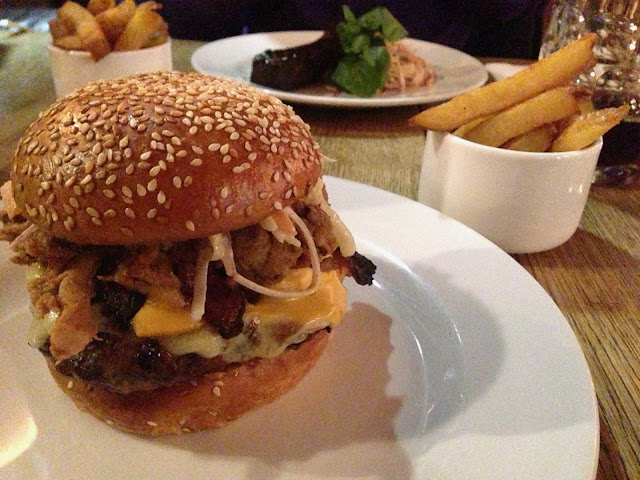 After slicing this bad boy in half to get a better look at it I went in for the kill. The medium rare patty immediately melted inside my mouth and the pulled pork and smoked bacon combo really hit the tastebuds. I found the coleslaw to be a really good accompaniment to the pulled pork and overall this was a great attempt at creating a burger that differentiates from the norm. If I was being picky I would say that the only thing to be improved upon is possibly the triple cooked chips. Not that they weren’t delicious, just the fact that I think they have been done better by others e.g. Rosemary Salted Chips at Honest Burger. 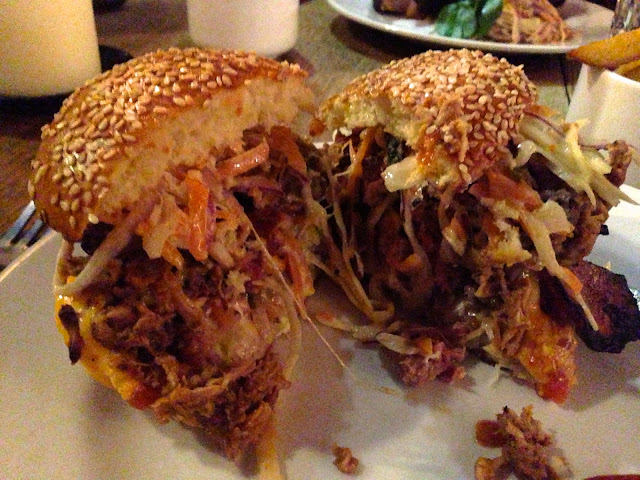 Jamie was extremely satisfied with his Pork Rib and if anything was only disappointed that there wasn’t more of it! He was very kind to let me have a bite and I can confirm that it was tip top and the BBQ glaze was exquisite. 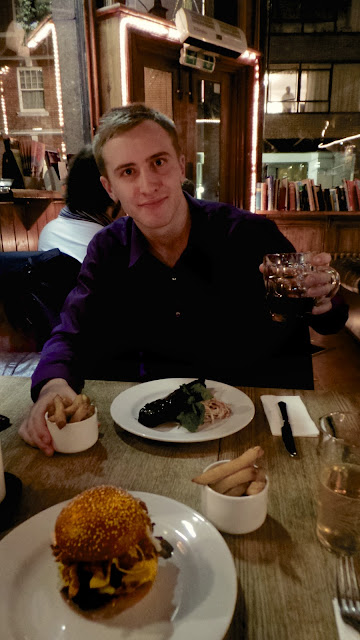 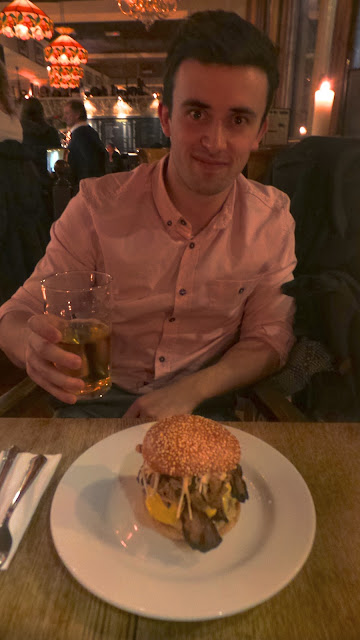 My final thoughts regarding BBQ Whisky Beer is that it was a great success and naturally I have been spreading the word ever since to my colleagues at work. With easy access on the Circle Line, this should definitely be on your list of eateries to hit for a pint and some good old wholesome meat fun after a long day in the City. Get there soon before they’re gone as they only have a 2 month residency at the moment!

Two days later and I find myself at the legendary KERB! Another great institution that I have been waiting to sample for a while and finally I lucked out as they have recently opened a new spot at The Gherkin! I took a few of my colleagues down from work with the promise of fine food at affordable prices.

When we arrived the area was crammed with punters looking for a delicious foody fix and what a spread to choose from. The vendors for today were Eat My Pies, Mike + Ollie, Fundi Pizza, Gurmetti and Mother Flipper! All can be found on the KERB website and there are many more vendors that take it in turns to turn up at one of the three markets. Beware of browsing the site if you’re hungry though as this is a confirmed recipe for a grumbling tum! 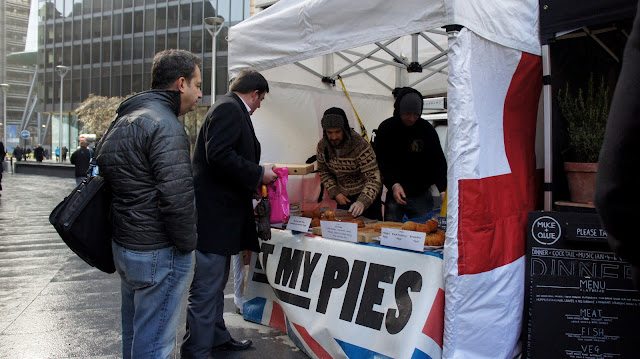 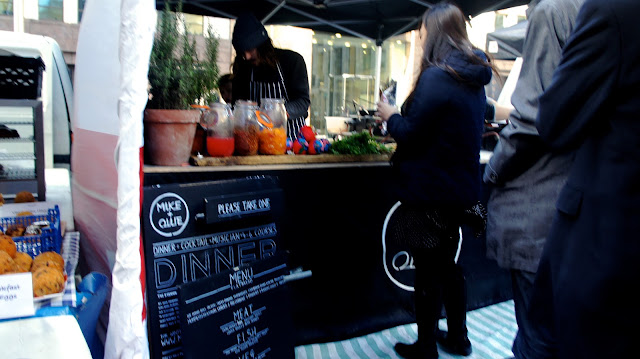 My friend Fiona opted for a homemade Lebanese Mackerel Flatbread with Lemon Sorrel, Parsley and Fresh Raw Fennel from Mike + Ollie, which I think you will all agree looks extremely inviting. 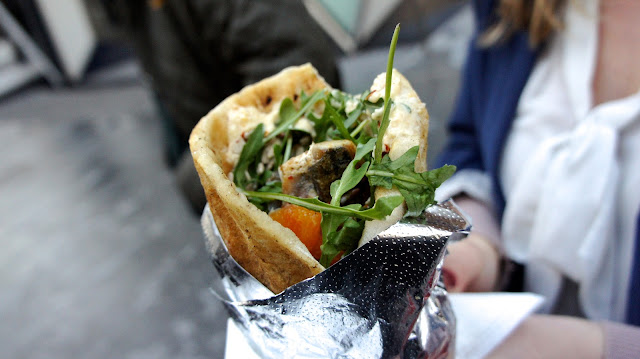 However Elliot, Boni and myself were pre-engaged in the queue for Mother Flipper! These guys were really turning heads as the line was getting really long and the crowd quickly multiplied as they waited for their burgers. At one point we thought we might just miss out as they were running close to empty but thankfully we caught the final three and then waited in anticipation. 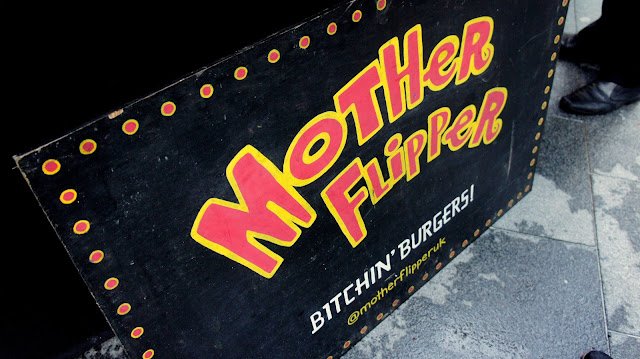 As they were all out of The Bacon Swiss Flipper, we all went for The Double Candy Bacon Flipper. These guys were slogging it out over their pop-up kitchen and you had to applaud their efforts. It wasn’t fast food as you know it but when you’re working in gail force winds and over a small griddle you can’t complain one bit. 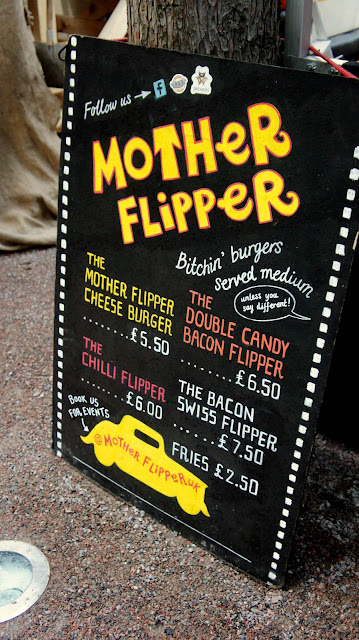 Part of the fun of KERB we found was watching the cooking in process. There was a frantic pace behind the counter but each burger was lovingly prepared to each customers requirements. 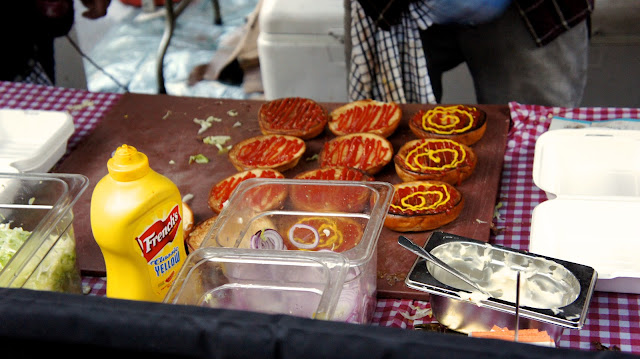 The patties were formed on site and promptly thrown on to the griddle along with the brioche bun and cheese. 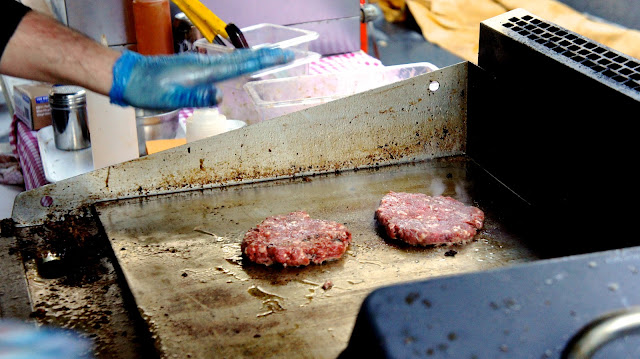 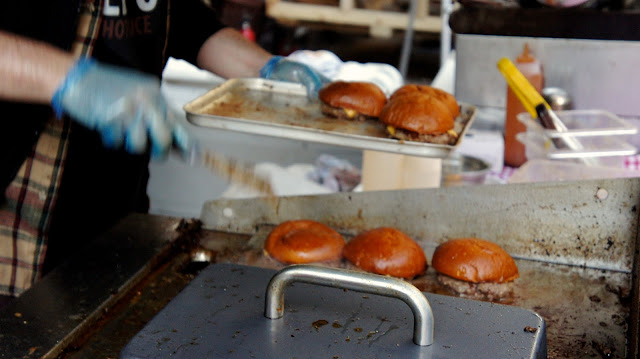 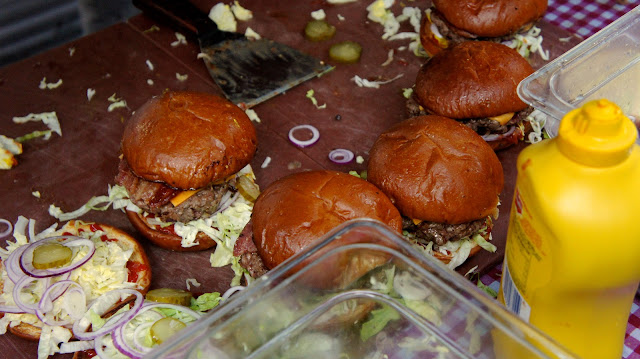 The final product ready for consumption or in my case, inhaling! Just to confirm, I didn’t order two haha! 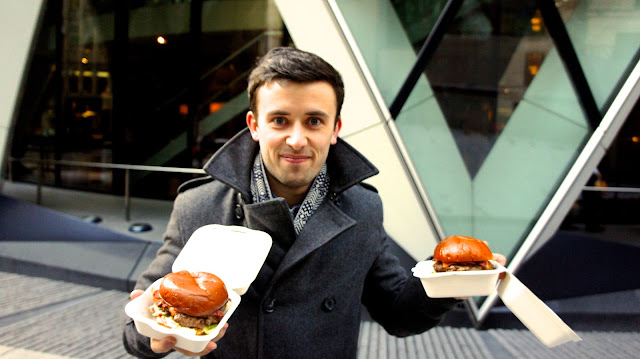 I think one of the great things about this burger is the way it’s built. The bun and cheese are thrown on top of the patty whilst it’s still cooking on the griddle. This means that the cheese and meat juices seep into the bun and superglue it to the patty. And although the bun has soaked up the amazing juices, it surprisingly still manages to hold the whole thing together perfectly.

As we were only here for lunch we didn’t feel the need for chips, so at £6.50 this felt like a steal! It was the equivalent of a restaurant burger but at a fraction of the price!

The Mother Flipper guys really know how to build one too. The candied bacon was sweet and smokey, complimenting the sweetness of the brioche. The patties were cooked to perfection and smothered with a healthy dose of ketchup, mustard and American cheese. I probably could have done without the salad if I’m honest as the flavours from the meat and condiments overpowered it but then again I never really fuss over the green stuff.

Mother Flipper really delivered and KERB too! I can’t wait till these guys pop down to The Gherkin again. You should see if they are coming to a market near you soon! I really want to try The Bacon Swiss Flipper, so I will be down there early next time or failing that desperately attempting to order via Twitter! 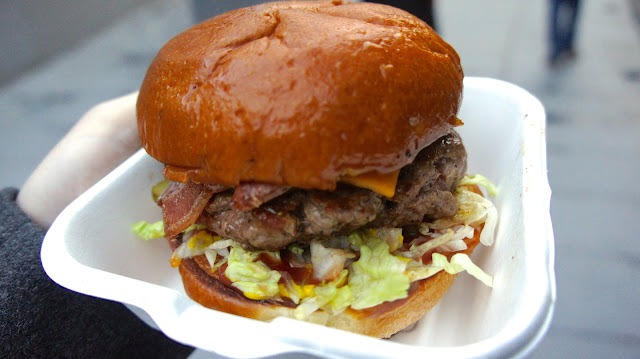 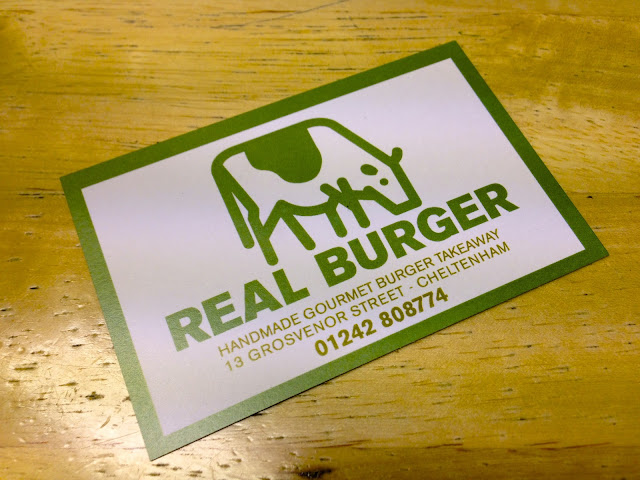 Finally we introduce Cheltenham’s greatest competitor to the London Burger Revolution. Now Real Burger has been around for a while but somehow has escaped the attention of both Mark and myself. However after having lunch with another fellow food blogger Angie from DishesUndressed, she realised my burger addiction and pointed us in the right direction.

Real Burger is a small fast food vendor that specialises in gourmet burgers and seems to have quite a loyal following, so we decided it was worth a try and headed out into Cheltenham with our chum Jamie.

The cool thing about Real Burger is you can customise the size of your patty. They offer all their flavours in either 4oz, 6oz or 8oz sized patties and there is a huge array of combinations to choose from! They are also proud that their patties are created by hand from 100% pure, grass fed, Gloucestershire beef. A no brainer really when you live at the centre of a food haven like The Cotswolds. 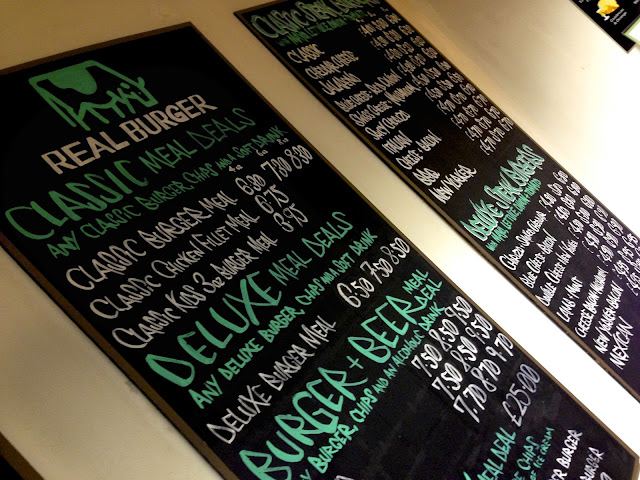 The decision making process was hard so Mark and I decided to go for the Blue Cheese & Bacon and the Chorizo & Smoked Cheddar Deluxe Steak Burgers, which we then halved to avoid the annoyance of food envy. We also ordered a side of hand cut chips and mozzarella garlic bread. 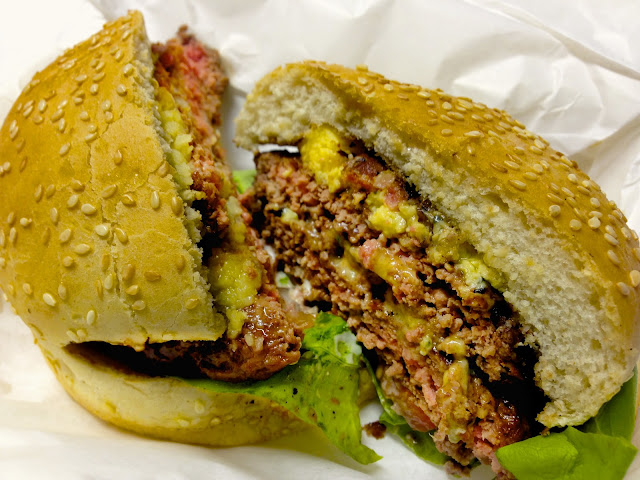 The burgers were served medium rare, just how they should be if you ask us! We started with the Chorizo & Smoked Cheddar first, just incase the blue cheese was overpowering. As with everything that contains chorizo, it tasted incredible. The chorizo’s strong and rich flavour emphasised the smoked cheddar, working together to create a really moorish mouthful. I have to say that I am a sucker for chorizo and actually favoured this one over the Blue Cheese & Bacon. Whereas Mark is the cheese nut out of the two of us so naturally he couldn’t wait to sample the second one. As you can imagine the blue cheese had a very strong and distinctive flavour that slightly masked the patty for me. Luckily the cured bacon had just enough punch to fight through the cheese though, making this still a great combination worthy of any cheese fan’s money. The sides were excellent too with the hand cut chips still wearing remnants of their potato skins, beautifully crisped and the garlic bread doused in homemade garlic butter and oozing lumps of melted mozzarella! 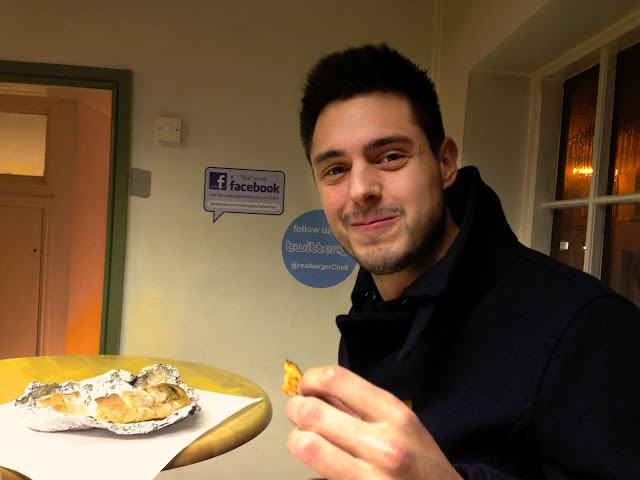 The important thing about Real Burger is that the different combinations of flavours on offer are great and they could definitely hold their own against most of the London pop-ups. The only thing it lacks for me and this goes for most of the Cheltenham clan is the lack of brioche buns! It may sound silly but this really is the thing that sets them apart. There is nothing better than a super soft and slightly sweetened brioche bun that moulds to the burger stack, soaking up the valuable juices from the meat and molten cheese.

We’d love to see this small vendor move into a larger property and create a full dining experience, it definitely has the potential and with some increased publicity, could easily cement itself as the number one spot for the full gourmet burger experience in Cheltenham.

To any of you Cheltenham foodies who haven’t sampled this place yet, get yourself down there and spread the word. The burger revolution is alive and smouldering in the back streets of Cheltenham, start stoking that fire!